Portland Trail Blazers All-Star forward LaMarcus Aldridge was not named to one of the three 2012-13 All-NBA Teams.

Portland Trail Blazers All-Star forward LaMarcus Aldridge was not named to one of the three 2012-13 All-NBA Teams but he was listed in the "other players receiving votes" category, where he was joined by Blazers F/C J.J. Hickson.

The All-NBA teams are voted on by a media panel and take positions into account, with each team made up of two guards, two forwards and a center.

Aldridge was an All-NBA Third Team selection in 2010-11. He finished first among forwards in the "others receiving votes category" this year just as he did in 2011-12. 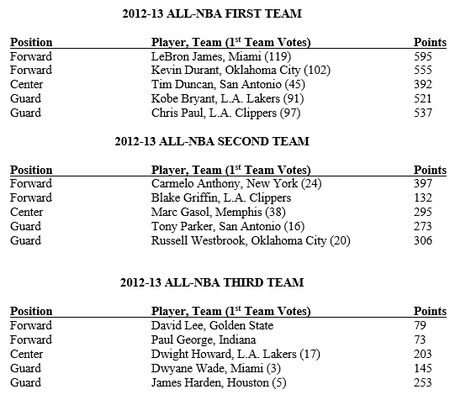 Other awards watching: Blazers forward Nicolas Batum received an All-Defensive First Team vote, Blazers guard Damian Lillard was unanimously selected as the Rookie of the Year and unanimously selected to the All-Rookie First Team, and Luke Babbitt received a third-place Sixth Man of the Year vote in one of the greatest moments in basketball history. Blazers GM Neil Olshey did not receive a vote for Executive of the Year, coach Terry Stotts did not receive any votes for Coach of the Year and no Blazers received votes for Most Valuable Player, Defensive Player of the Year or Most Improved Player.