Two men have accused associates of Portland Trail Blazers guard Damian Lillard of beating them in a late-night dispute over a photograph.

Pat Dooris of KGW.com reports that two men are alleging that they were beaten by associates of Portland Trail Blazers guard Damian Lillard early Saturday morning.

Lillard was allegedly present at the beating but is not a suspect at this time, although one of the men accuses the 2013 Rookie of the Year of "instigating" the incident by taking exception to having his picture taken.

"And his entourage just turned around too and they're like ‘did you just take a picture of Damian Lillard?' And I was like --and I said 'Yeah, I did.' And so I saw that he was clearly upset, they were upset and I was like, 'Can I apologize to him? Like I'll go up right now and apologize to him,'" the brother said.

Within minutes, he says the discussion became an all-out fight which did not involve Lillard but did involve others that the brothers believe were part of Lillard's group. When the second brother stepped in to help his brother, he says he was punched and kicked repeatedly, enough to break his nose and require stitches in his lip.

A spokesperson for the Portland Trail Blazers told KGW "We are aware of the alleged incident. Based on preliminary reports, none of our players is considered a suspect in this case."

"What we do know for certain at this point is Damian Lillard is not a suspect in this incident at all," said Portland Police spokesman Sgt. Pete Simpson. "Police did talk to him there. He remained at the scene. What we don't know is if these people were actually associated with him or people standing in a group or hangers on. We're not really sure yet."

Aaron Goodwin, the agent for Lillard, said Lillard was "not involved" in the incident.

The victims, who are brothers, told police that others who were with Lillard and saw them take the photo assaulted them.

"Police have not verified if the suspect(s) are or are not associated with Lillard,'' Simpson said, in an e-mail.

Here's the photo that one of the men allegedly took of Lillard via KGW's report. 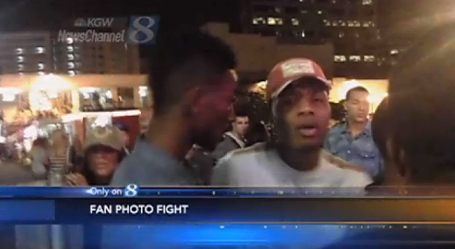 Sgt. Pete Simpson, a Portland police spokesman, said that the two brothers told responding officers that they were assaulted by a group of people standing near Lillard after one of them took a picture of him. According to Simpson, Lillard remained at the scene and cooperated with officers.

The two victims, identified as 28-year-old Jermaine Ulinwa and his 21-year-old brother Philemon, received treatment at the scene by Portland Fire & Rescue crews.

Portland police detectives are continuing to investigate. No charges have been filed.

Lillard won the NBA's community assist award for March for his anti-bullying campaign, which encouraged people to sign "respect pledges" that aimed to create positive communication and tolerance.

"It's an honor to receive this award and I hope that it will bring even more attention to the Respect campaign," said Lillard. "I've seen too many of the negative effects that bullying has on people, especially kids. Now that I've learned how many people look up to us as NBA players, I want to make the most of it by getting behind positive initiatives like anti-bullying." 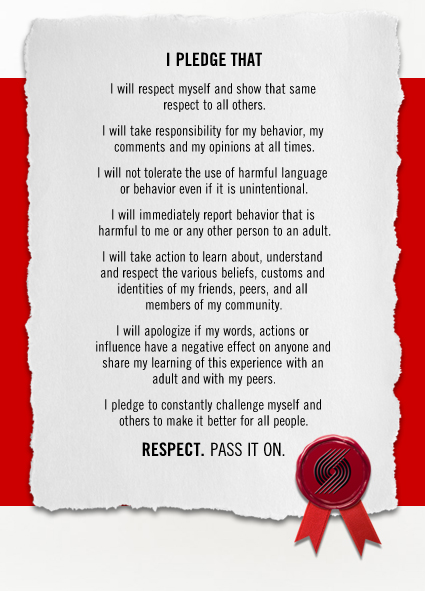 Lillard was also selected as the Blazers' 2013 Maurice Lucas Award winner, recognizing his contributions on the court and in the community.

The award is given annually to the Trail Blazers player who best represents the indomitable spirit of Maurice Lucas through his contributions on the court and in the community, as well as in support of his teammates and the organization. In honor of the award, the Trail Blazers will make a $5,000 donation to the charity of Lillard's choice.

"Damian has been a consummate professional throughout the entire season. Despite being a rookie by NBA standards, he's carried himself with the poise of a veteran," said Olshey. "He's been one of our leaders in the locker room and has led by example on the court. That leadership extends into the community, which is something that can't be taught. Damian epitomizes the nature of the Lucas Award and I'm pleased to see him win it."

Lillard's Twitter account indicates that he spent some time on Saturday at Oaks Park and is now in New York City in advance of Tuesday's 2013 NBA Draft Lottery drawing.

Lillard said in an interview with Blazers Courtside earlier this month that he planned to remain in Portland this summer.

What do you like to do outside of basketball?

Will you travel to Summer League to watch teammates?

I'm staying in Portland. I'm always around. I'm in public all the time. As far as Summer League, I'll be there. I enjoy stuff like that, seeing the players that got drafted, the players who went undrafted, I like seeing them all play. I like watching it, seeing people's progress, they are going through the stages i went through.

Lillard has spoken repeatedly about the challenges associated with growing up in Oakland, most recently during his Rookie of the Year acceptance speech.

I just want to tell everybody a little bit about myself because I kind of started from an unfortunate situation. I grew up in Oakland, California, and there's a lot that goes on there. I grew up with a lot of people that did things that I knew, from the gate, was out.

I started playing football and I was kind of soft, and I admit, I was scared. My family, they constantly picked at me about it. 'Oh, you're scared to get back out there. You don't want no part of that contact.' I just remember my brother, my cousin John, and they made me get in the grass. They were hitting me as hard as any kid could ever hit. I came back two years and I got defensive player of the year. Just the fact that they were able to put that confidence in me, that let me know a lot of things.

Update: Lillard appeared on BET's 106 & Park to do an interview on Monday.

Winning Rookie of the Year

It's a great feeling especially when you come from an unfortunate situation. Being in the NBA by itself it's a blessing. The fact that I could come in and have so much success so early is a great feeling.

Pressure for next season

I can see why people would think it would be harder for me to come back and do more next season, it's a lot easier when you put that pressure on yourself to begin with. I expect it from myself so the outside pressure doesn't really add to it.

Where are you from?

I'm from Oakland, California. Neighborhood: Brookfield. A lot of the same people I grew up with I'm still around. Those are same people I keep in my circle, small circle. I always give a lot of credit to where I come from because that's a big reason I've been able to make it to this point. Shout out Brookfield.

Lillard also said his favorite hip hop artists to listen to before games are J. Cole, Rick Ross and Juvenile. He also promoted his new adidas Rookie of the Year sneakers and picked the Miami Heat over the Memphis Grizzlies in the 2013 NBA Finals.

Update: Video of the suspects giving their accounts via KGW News.

Thanks to jbay4 who got there first in the FanShots.