Portland Trail Blazers owner Paul Allen sold a painting for more than $43 million at a Sotheby's Auction on Tuesday night.

The details from Sotheby's.

Tonight at Sotheby's the Contemporary Art Evening sale totaled $293,587,000, and was 82.8% sold-by-lot. There were exceptional prices for works from every decade from the 1940s through today with records set for Barnett Newman and Gerhard Richter, among others. The price achieved for Richter's masterwork also established a new benchmark for any living artist at auction. The global nature of today's art market was yet again underlined with collectors from 35 countries registering to bid in the sale, 20% of whom were new to either Sotheby's or the category.

Tobias Meyer, Worldwide Head of Contemporary Art at Sotheby's, said: "This evening we are very pleased to have achieved three landmark prices for masterpieces by key post-war artists. Barnett Newman's Onement VI established a world record for the artist at auction and doubled the world record price achieved just one year ago."

The sale was led by Barnett Newman's Onement VI, which sold for $43,845,000 after competition among five bidders - that price eclipses Newman's previous auction record by a margin of more than $20 million. The monumental 1953 painting is the most important work by the artist ever to appear at auction and stands as a masterwork not only of Newman's artistic enterprise, but of the entire Abstract Expressionist movement.

Consigned by Paul Allen, co-founder of Microsoft Corp. (MSFT), Newman's 8.5-by-10-foot "Onement VI" was estimated at $30 million to $40 million. Its sale was ensured by an undisclosed third-party guarantee.

Claudia Dwek, deputy chairman of contemporary art in Europe for Sotheby's, bought the painting for a phone client. The price smashed Newman's previous auction record of $22.5 million, set last May at Christie's. At least five bidders competed for the work.

For comparison's sake, StoryTellersContracts.com puts the combined salaries of the 2012-13 Blazers at $58.4 million.

Here's a look at the painting. 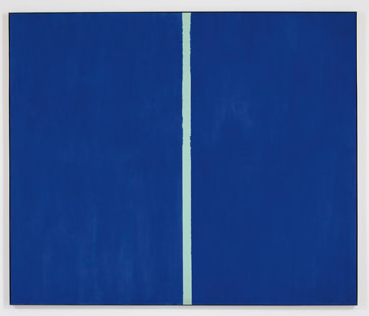 Radford.edu has more background on Newman if you're interested.

The sale price equates to $21,922,500 per dark blue rectangle in the painting. Losing bidders were advised to simply search Amazon.com for some blue curtains instead. Prices start around $11.99 and go up from there.

Forbes ranked Allen the richest NBA owner back in March 2013, putting his estimated net worth at $15 billion. An April 2013 Reuters article wondered whether some of Allen's recent financial successes have been overlooked.