The NBA announced its 2013 All-Defensive First and Second Teams on Monday. No Portland Trail Blazers were included but forward Nicolas Batum did garner a vote for the First Team.

Here are the voting results.

The voting panel consisted of the NBA's 30 head coaches, who were asked to select NBA All-Defensive First and Second Teams by position. Coaches were not permitted to vote for players from their own team. Two points were awarded for a First Team vote and one point was awarded for a Second Team vote. 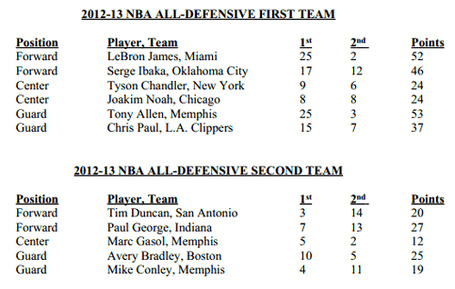 Care to guess which coach singled out Batum for his defensive acumen?