The Portland Trail Blazers announced Wednesday that guard Damian Lillard is the unanimous selection as NBA's 2013 Rookie of the Year.

The Portland Trail Blazers announced Wednesday that guard Damian Lillard is the NBA's 2013 Rookie of the Year in a unanimous vote.

The Blazers held a press conference to announce the honor at the Rose Garden. Coverage of that is right here.

Damian Lillard of the Portland Trail Blazers is the recipient of the Eddie Gottlieb Trophy as the 2012-13 Kia NBA Rookie of the Year, the NBA announced today. Lillard was a unanimous selection, having totaled 605 points as he received all 121 first-place votes from a panel of sportswriters and broadcasters throughout the United States and Canada. Blake Griffin of the Los Angeles Clippers was the last unanimous selection (2010-11).

Among first-year players, Lillard ranked first in scoring (19.0 ppg), assists (6.5 apg) and minutes (38.6 mpg). According to NBA.com/Stats, the Trail Blazers had an offensive rating of 105.0 points (per 100 possessions) when Lillard was on the court compared with 93.5 points (per 100 possesions) when the first-year player was on the bench. When on the court, Lillard assisted on 36.5 percent of Portland's field goals while scoring 23.9 percent of his team's points.

Lillard, the sixth overall selection in the 2012 NBA Draft, made a clean sweep of the Kia NBA Rookie of the Month Award in the Western Conference this season. He set an NBA rookie record by making 185 three-point field goals, surpassing the 166 triples made by Golden State's Stephen Curry during his 2009-10 rookie campaign.

Portland Trail Blazers guard Damian Lillard has been named the 2012-13 Kia NBA Rookie of the Year, it was announced today by the NBA.

Lillard, 22, led NBA rookies with 19.0 points and a team-high 6.5 assists to go with 3.1 rebounds and 38.6 minutes in all 82 games. Portland selected Lillard with the sixth overall pick in the 2012 NBA Draft out of Weber State.

"The Rookie of the Year Award validates the dedication and commitment to excellence Damian exhibited all season in games, at practice and in the community," said Trail Blazers General Manager Neil Olshey. "His willingness to take ownership and be held accountable for the high expectations placed upon him since last year's draft are vital components in building a championship caliber roster. With his work ethic and passion for the game, Damian's historic rookie season is the first step in what will be a long and distinguished NBA career."

The 6-foot-3 guard joined Oscar Robertson and Allen Iverson as the only three rookies in NBA history to record at least 1,500 points and 500 assists.

Lillard broke Stephen Curry's NBA rookie record for 3-pointers made in a season, finishing with 185 3-pointers on the year. He continued his historic rookie season by becoming the first rookie to lead the NBA in total minutes played (3,167) in a season since Elvin Hayes in 1968-69.

"I am very proud of what Damian accomplished this season," said Trail Blazers Head Coach Terry Stotts. "It is a testament to his talent, character and work ethic that he played at a very high and consistent level throughout his rookie season. Along the way, his name was mentioned along with some of the greats to have ever played in the NBA.

"This is just the beginning of what is sure to be an outstanding NBA career. I know that Damian is already working on ways to get better for next season."

Lillard becomes the fourth Trail Blazer in franchise history to take home the Eddie Gottlieb trophy alongside Brandon Roy (2007), Sidney Wicks (1972) and Geoff Petrie (1971). Portland is the only NBA city to garner four Rookie of the Year awards since the team was founded in 1970.

"Not only is he a talented player on the court, he's also become an admired ambassador for the Portland community, the Trail Blazers and the entire NBA," said Chris McGowan, Trail Blazers President & CEO. "We are thrilled about his unanimous selection as the 2012-13 Kia NBA Rookie of the Year. This is another proud moment in Trail Blazers history."

Here's how the vote tally broke down. 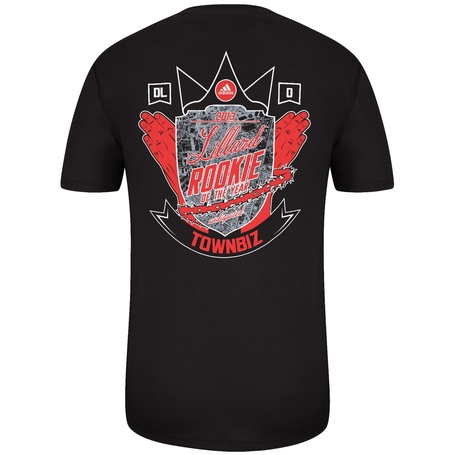