The Memphis Grizzlies defeated the Portland Trail Blazers, 94-76, at the Rose Garden on Wednesday night.

The Memphis Grizzlies defeated the Portland Trail Blazers, 94-76, at the Rose Garden on Wednesday night, dropping Portland's record to 33-42.

As a team's winning percentage drops this time of year, the pretenses tend to drop too. Without meaningful pressure and with the finish line in sight, the truth tends to get set free.

Just ask Blazers reserve forward/center Joel Freeland, who has registered more fouls (61) this season than field goals (48) or offensive rebounds (36). On many occasions, he's looked like an actor playing on the losing team in a basketball movie: the action happens around him, he only gets face time after committing a violation or hacking someone, and there's usually a look of frustration or confusion on his face when the camera does find him.

He's making sub mid-level money -- $3.1 million this season, $2.9 million next season and $3.0 million in 2014-15 according to StoryTeller's Contract -- but he's not earning it, not even close. He's averaging 2.3 points and 2.2 rebounds per game, shooting 40 percent from the floor, and he hasn't played enough minutes to qualify for the Player Efficiency Rating rankings. For the sake of context, if we remove the minimum minutes requirement, Freeland ranks No. 89 out of 103 NBA power forwards in PER.

There's a stubbornness that runs rampant among struggling NBA players, a refusal to admit to their shortcomings, and/or a denial of their bad play, and/or a self-assured focus that the next game will be better and that hard work and film study will make everything OK eventually. It gets tiresome to listen to and occasionally tiresome to type about, but there's no alternative when there are meaningful stakes on the line, whether that be playoff possibilities or impending free agency.

Freeland is in a position to be brutally honest, with himself and with the media, as the Blazers are effectively eliminated from the postseason and he has two more fully-guaranteed years remaining on his contract. He took that opportunity on Wednesday, telling Blazersedge that his goal for the rest of the season is to simply prove to the coaching staff that he can be trusted with playing time.

"I'm going out there to show the coaches I'm not a liability on the court," he said bluntly. "To show them I can be on the court, I'm not going to get scored on, I'm going to play solid defense and do the things they want me to do without making mistakes. That's what I need to do."

So there have been times this season that you've felt like -- to use your own word -- a "liability"?

"A couple of times, yeah," he admitted. "That's part of the learning process, part of the adjustment I'm making at the moment. Speed of the game, strength of the game, athleticism of the people. Everything."

Freeland finished with seven points, three rebounds and four fouls on three-for-four shooting in 17 minutes, but drew praise from Blazers coach Terry Stotts, along with JJ Hickson and Meyers Leonard, for his involvement in Portland's interior defense, which allowed only 38 points in the paint on 34 shots in the paint to a physical Grizzlies frontline.

"I want to take away some positives with the young guys playing," Stotts said. "We protected the paint decently, they only had 38 in the paint. Which is a good sign for us. Kept battling."

This game was far from competitive -- no surprise with both LaMarcus Aldridge (ankle) and Nicolas Batum (shoulder) sitting -- but it wasn't pathetic. It passed the team's bar of playing with "integrity"; they should be able to watch the tape without feeling embarrassment or excessive frustration.

That hasn't always been the case for Freeland, who didn't hide from the fact that he's been involved in offensive sets that are messed up so badly that he's suffered through teammate-on-teammate collisions.

"Most of [my mistakes] have been coming offensively," he said. "We always get the rotations mixed up, between who is rolling and who is popping. Sometimes we run into each other. That's been my main problem at the moment. Today I did a pretty good job on that."

Expressing happiness that you didn't run into your teammate is the definition of dropped pretenses in the NBA. Better an honest self-assessment -- and Freeland wasn't kicking himself about this -- than a cluelessness or a disregard for mistakes.

The 26-year-old British big man sees himself struggling on the other end, too, where he often draws foul calls in one-on-one defensive situations and is a sure bet to lose any bang/bang block/charge play. Freeland believes he's improved on that end over the last few games, in terms of eliminating his worst mistakes, and that he's tried to narrow his focus.

"Slowing the game down, that helped me a lot," he explained. "[When I] slow down, I see what's going on, instead of being out of control and trying to see where everyone is. Slow down, focus on one thing and let it come to me. Instead of trying to anticipate and be in front of the game."

Improvement or not, the lasting memory of Freeland's season will be the whistles. Bite on a pump fake? Tweet. A half-step too slow to cut off the baseline? Tweet. Not quite in position to contest a put back attempt? Tweet. Try to give up the body by sliding across the key to provide help defense on a drive? Tweet. Look the wrong way at a superstar? Tweet. The list goes on.

Freeland was assessed three fouls in a two-minute stretch of the third quarter on Wednesday and it was barely enough to raise an eyebrow. All those foul calls must get old, right? At some point, wouldn't you start to take all those personal fouls, um, personally?

"I wouldn't say it's being picked on," Freeland told Blazersedge. "Everyone goes through it. ... Everyone says it's the rookie treatment, rookie year. Until I earn that respect I'm never going to get -- I'm going to come in and get three fouls in two minutes, that's happened on numerous occasions this year."

Freeland averaged double-figures for multiple seasons in Spain's ACB league, but he laughed when asked whether he got more favorable treatment from the referees overseas.

"No, I never got the superstar calls," he told Blazersedge. "I've never been on that side of the boat before. Yeah [I scored], but the refs didn't respect me like that."

Rookie guard Will Barton then piped up from across the locker room: "That's because you weren't getting buckets."

Indeed, that's precisely the curse that has the potential to haunt Freeland for as long as he remains in the NBA. His limited offensive repertoire, his stocky body, and his fairly fluidless game make him an easy mark. Opponents and referees alike see him coming a mile away. The upside is this: the next seven games are as important to Freeland as they are to any player on the team, as he can expect plenty of minutes against some of the best competition in the league.

That's clearly the mindset and the mode for the entire Blazers team from here on in, with no clear word on the availability of Aldridge and Batum.

"Unfortunately we're going to have to learn and get better like an extended summer league," Blazers guard Wesley Matthews, who finished with 12 points (on five-for-16 shooting) and two rebounds in 39 minutes. "That's not the way we wanted it to be but that's how it is."

Meyers Leonard, Freeland's rookie big man partner in crime, had 10 points and seven rebounds in 28 minutes. He was only willing to say that the Blazers did an "OK job" defending the paint, although he pointed out that "OK" was better than their interior defense in a number of recent games.

I linked to an article about Leonard's goals for offensive improvement the other day and the overwhelming response I received was that he shouldn't think about anything besides the defensive end, as the needs there are so much more dire. The two sides of the floor aren't mutually exclusive, but it's worth noting that when I asked him what he wanted to work on during the next two weeks of live game action, Leonard went straight to the defense, and only the defense.

"Guarding one-on-one in the post and blocking shots," he told Blazersedge. "It all comes with anticipation, learning the league. Timing and everything like that. It's gotten a lot better, from the beginning of the season until now, it's night and day."

A few more nights and days and Leonard will be all right. Freeland, though, remains an open question. On a night that saw Portland shoot four-for-29 from deep, score only 12 fourth-quarter points and trail by double-digits for most of the way en route to its sixth straight loss, at least the candor was fairly satisfying. 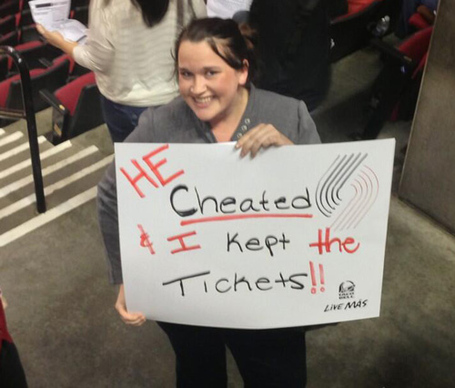 Disappointing. When you come out and have those three turnovers in the second half, it's pretty deflating. I think those that we executed, that we set screens, that we came out with the right purpose at the beginning of the second half, after that it got better. You can't take anything for granted with your passes against Memphis. Tony Allen is going to be there, [Mike] Conley has great hands, they anticipate well. I think we kind of took them for granted a little bit.

Probably nothing in particular. I liked the way they played. Meyers, Victor, Joel and Will, they all went out and played hard and tried to do the right thing and execute, rebound, play hard. They were aggressive when they needed to be.

Disappointment or some growth from this game?

You hate to lose and you hate to lose at home. I thought we played hard. Memphis is a top seed in the West, you have to give them credit. Obviously they're a better team than we are. You want to take away opportunities to teach and get better, particularly with the young guys. More importantly, I want to make sure we play the right way, play hard, get better, all the things you need to do. Most of these guys are going to be here next year and we've got to work with them. This is an opportunity for them.