Here's Smith's explanation of his tattoos from the video.

My first tattoo, I got my dad right on my arm when I was 16. He's my big inspiration, my dad put the ball in my hands. From there, my other tattoos are things that I believe in, my slogans. 'Never be denied. Built to win.' I've got the Final 4 logo on my stomach. 'Like father, like son.' Me and my dad won the championship in Indianapolis. I've got 10 tattoos right now. I use tattoos to express myself. I like getting inked up. Whenever something hits my mind, a new idea, then I'll get a tat.

Here's a close-up shot of the tattoo of Smith's father, a former NBA player who died when Smith was a child, from when Smith was introduced by the Blazers in 2011. 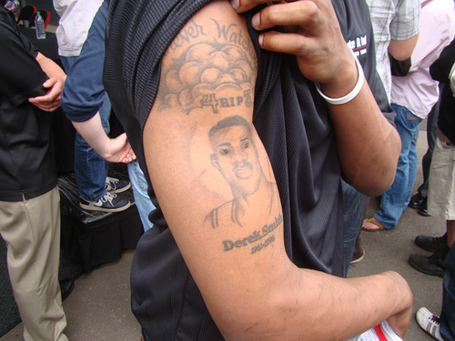 Bruce Ely of The Oregonian recently had a photo essay of Blazers tattoos.

Smith (here) and GM Neil Olshey (here) made it sound like Smith will not be back with the Blazers next year.

Nolan Smith on future with Blazers: "I think it's pretty obvious that I'm a free agent. They made that pretty clear. ... I think we can say that [I won't be back here next year] but I can't see the future. I don't know what they're thinking. We'll see what happens. ... They have a path that they want to go down and it's pretty obvious I'm not on it right now."

Neil Olshey: I think Nolan needs a new environment. Nolan is an NBA player but bringing Eric Maynor in, the moniker of being a first-round pick was tough for Nolan to overcome. He's a great kid, he did everything we asked him to do, he's going to be on an NBA roster next year, but he more than anyone needs a change of scenery, he needs to start fresh.