Former Portland Trail Blazers guard Rudy Fernandez was punched in the face by a fan following a game between Real Madrid and Zalgiris Kaunas in Lithuania on Thursday, according to multiple reports.

The incident reportedly occurred as Fernandez headed towards his team's bus following a game in which he was regularly booed, hissed and sworn at in response to an incident between the two teams back in January.

There is a lot of back story here. Let's dig in.

First things first, in the closing seconds of a January 11 Euroleague game in Spain, Fernandez threw the basketball off of Ksistof Lavrinovic's head after a made free throw, prompting a retaliatory shove. After the game ended, with Madrid winning 75-74, Fernandez walked by Paulius Jankunas, who was laying on the ground, and clearly said something to him, which prompted a stare down and the intervention of teammates and referees. Here's video of the exchange via YouTube user Dabqtis.

Fernando was fined 3,500 Euros by Euroleague for his actions later in January.

Fast forward to Thursday, when the two teams played again, this time in Lithuania. Lithuanian fans were clearly prepared for Fernandez's arrival, bringing signs that read "Rudy: those born to crawl will never rise" and "actoR, dUmb, cowarD, scurvY." 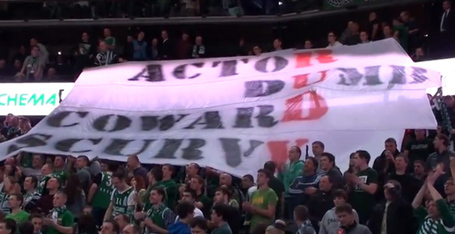 Here's video of Fernandez's introduction via YouTube user audrius200. He was booed loudly.

Later in the game, the crowd began chanting, "[Bleep] you, Rudy," over and over. Here's video via YouTube user Kas vyksta Kaune. Note: explicit audio (obviously).

After the game, according to multiple reports, Fernandez was punched in the face. Madrid won by the way, 105-104, and Fernandez had 11 points.

Rudy Fernandez, who plays for Real Madrid, was attacked by two fans after the game against Zalgiris Kaunas, on his way to the team bus accompanied by a security officer within Zalgirio Arena.

The player fell to the ground after being attacked from behind and had to intervene Lithuanian police, who arrested one of the attackers. The other, pursued by agents and even by fellow Rudy, escaped.

The head of the basketball section of Real Madrid, Juan Carlos Sanchez, has been outraged by the incident: "If we want some of the best players in Europe back in the NBA, and events should not happen ever. Euroleague to take drastic measures to prevent this from happening again. need an exemplary punishment. "

The Real Madrid player, Rudy Fernandez , was attacked by two fans after the game against Zalgiris Kaunas, on his way to the team bus accompanied by a security officer inside the Arena as recorded Zalgirio EFE.

The player fell to the ground after being attacked by Detra s and had to intervene Lithuanian police, who arrested one of the attackers. The other, pursued by agents and even by fellow Rudy, escaped.

Sources say Rudy Fernandez was punched in the face hardly by Lithuanian fan after the Euroleague game. Shame on that!

Real Madrid had their security guy but he didn't react fast enough. Offender was arrested, Fernandez [and company] went straight to airport.

Fernandez's face was [Bloodied], sources say. Zalgiris expects not to be punished as it happened outside arena.

Things like this happen when people are crazy about basketball & get drunk. But those can't be reasons for such a disgraceful behavior.

A fan of Zalgiris assaulted when forward Rudy Fernandez left the Spaniard Zalgiris facilities with the intention of getting on the bus carrying the white expedition to the airport.

Real had hired a Russian security officer to accompany the team on its trip to Kaunas. The intention was that he was especially attentive to Rudy Fernandez, whom the fans of Zalgiris Nail expected behavior after his controversial first leg. It had been more or less within the foreseeable. The international forward, who finished the game half injured, was booed every time he touched the ball. After the meeting the work became difficult to unpleasantness.

A fan came up behind Rudy when he was about to enter the bus, shoved and a punch in the face that made him bleed even, by some accounts.

So far, according to the newspaper '15min. Lt 'on its website, police have arrested a man suspected of the attack. Apparently this is one of the brothers Maciai known radical Zalgiris fans. Continuing this Lithuanian version of this medium, his brother was also involved in the events, but went on the run to evade security forces.

Fernandez, 27, played for the Blazers from 2008-2011. He was then traded to the Dallas Mavericks, who in turn moved him to the Denver Nuggets, where he spent the 2011-12 season. Following that season, he elected to return to Real Madrid, where he had signed to play during the NBA's 2011 lockout. Fernandez holds NBA career averages of 9.1 points, 2.4 rebounds and 2.2 assists per game.

PS Thanks to SEAheartPDX in the FanShots.