The Portland Trail Blazers defeated the New York Knicks, 105-90, at the Rose Garden on Thursday night, improving their record to 30-34.

The Portland Trail Blazers defeated the New York Knicks, 105-90, at the Rose Garden on Thursday night, improving their record to 30-34.

This was a truly breathtaking sociological experiment that's fairly difficult to process in the immediate aftermath. Getting 20,000 people -- even like-minded people -- to fervently agree on any topic, at any time, is not easy. Think about the hundreds of millions of dollars and the political machines that have existed for generations with the sole purpose of identifying and exploiting topics that impact people on a personal level so directly that they are moved to action.

The NBA stokes the same passions, occasionally, but the extended moments are almost always euphoric joy rather than the opposite. In this context, it's significantly easier, more fun and more rewarding to cheer for the hometown guys or representatives of like-minded values, no matter how far that gets stretched for convenience, than it is to let loose the venom.

Yes, referees and opposing star players occasionally catch meaningful wreck. But if we're divvying up the pie chart of human reactions at the 45 or so Blazers games per year, the largest slice is cheering, a large slice is waiting for something to happen, a large slice is just absorbing such a major group setting, a large slice is hoping Blaze the Trail Cat doesn't grope you, and then there's a sliver for the boos.

Everything about the environment encourages fun, as long as the game is at least somewhat competitive and especially if the home team is winning. The laundry list of positive reinforcements goes on and on: mascot(s), cheerleaders, stunt team, disc jockey, t-shirt giveaways, halfcourt shot contests, streamers from the rafters, a blimp circling the crowd, goofy jumbotron videos, highlight replays, etc.

And yet overriding all of that on Thursday was a collective, repeated rebuke of one man -- Knicks guard Raymond Felton -- for his role in a dismal 2011-12 season. New York's injuries made a Portland win a virtually certainty, the Blazers, eventually, were leading handily, the favorite son (Damian Lillard) was playing out of his mind, and it was all happening on national television, making it seem that much more important.

"Obviously there are some strong feelings about Raymond Felton," Blazers coach Terry Stotts said. "One of the things I've really enjoyed about being in Portland is how passionate the fans are. They're into the game. I loved it."

The wheels turned quickly, and the coach caught himself, perhaps realizing how a direct, clarification-free endorsement of the harsh treatment might be taken by Felton, the Knicks or by others around the league.

The Rose Garden fans were into this one, in a way I haven't personally experienced and might not experience for a long time. So many factors came together to produce three hours of repeated, gleeful booing: Felton's play, Felton's conditioning, Felton's overall demeanor and attitude, Felton's statements leading up to the game, media portrayals of all of the above, social media, an unforgettable cupcake photobombing a press conference, the quick collapse of the 2011-12 season, the arrival and blossoming of Lillard, the lack of other major storylines during this Blazers regular season, and the long road ahead before the Blazers can expect to be competitive at a level many thought, a few years ago, that they would be by now. Surely there are other reasons, but that's a good start.

To see grown men chant "Do-Nuts! Do-Nuts" in public and giggle like children is a most unusual and interesting phenomenon. To hear the boos continue, not relenting in the slightest, was surprising, even for those braced to expect a rough reception. Felton's play Thursday encouraged this too. He shot four-for-12, badly bricking a number of jumpers, to finish with 11 points, three assists and two turnovers. He wound up only 39 points short of the 50 he had promised to "drop on 'em" last summer, leaving "those bloggers and those people who write" to make a chart to compare his puffy-chested proclamation to the relatively puny final output. 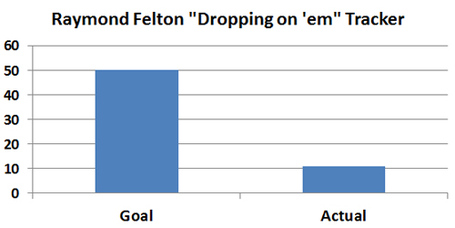 "It was what I expected," Felton said of the crowd reaction. "Some boos. Boos the whole time actually. It made me laugh."

His post-game press conference occurred in front of maybe 20 media members, a true visiting locker room mob, especially by this season's less intense standard. Jamal Crawford's return with the Los Angeles Clippers met with maybe half that number, at most. This crowd, if guilty of rubbernecking, was appropriate because this was news. So very many people took so very much pleasure voicing so very much displeasure at a single person. What did the object of scorn think?

"Oh yeah, it was loud," Felton said, when asked if he could hear the boos while he played. "Of course. Definitely, I definitely could hear that. Like I said, it made me smile."

Was this scene really that funny?

"When you get booed, how else are you supposed to respond to that?", Felton told Blazersedge. "You can't get angry. You can't do anything, all you can do is smile and laugh, that's all you can do."

From there, Felton's response to the crowd was two-fold: try his best to laugh it off and attempt to shift the majority of the responsibility off of his own role.

"It's a lot of stuff written by somebody, it comes with the territory," Felton said, after blowing off one question by a reporter to whom he refused to answer a question. "As something somebody wants to put out there, wants to write, wants to say negative things about a person, that really don't know me. It is what it is, man."

He also tried to take solace in individual conversations he had with fans, as opposed to the voice of the loud majority.

"I still have a lot of good friends here, fans who came up to me and said, look, regardless of the boos, we still love you," Felton said. "Even if one person says that to me, that means more than any of those boos, any of that negativity. You can write it and say it but you can't say it to my face."

The fixation on a media that he believes inaccurately portrayed his locker room presence without addressing him directly is particularly bizarre given the very direct communication he received from the crowd from tip to buzzer. Everything in the world was said straight to his face, it rained down upon him, and, with his play incapable of offering a response, he opted to eject mentally, processing his role as punching bag by attempting to create a punching bag of his own.

The NBA is a league of second, third, fourth and fifth chances, and Felton has found a good landing place, surrounded by teammates with whom he seems to get along well. He's playing on a veteran squad that can make use of his strengths and hide his deficiencies on most nights.

"I'm happy, I'm in a happy place," he said, and there was no reason to doubt him, at least about this. "I love playing ball in New York and the fans love me there."

Shutting out negative feedback is a skill, an art and, sometimes, a necessity. Expecting Felton to dwell on this night is unrealistic and, frankly, naive. But you would think these extraordinary circumstances would lead to at least a moment of self-reflection, a private admission that all of this anger wasn't invented from thin air or from a few keyboards.

Just for a moment, stop laughing, and the fake laughing, and ask a few pertinent questions: "What did I do to make those normally sane people so upset? Why haven't they listened when I've tried to take responsibility for my actions? What else might I do to mend fences, if not today, then a year or two years from now?"

There's value in posing and contemplating the questions, even if the answers wind up being that it's already too late.

I thought that we had a good game. The start was very disappointing defensively. We weren't very alert, we weren't very aggressive. They got a lot of confidence. That was disappointing how we started the game. How we finished the first half, the second quarter with some defense, creating some opportunities. We were able to ride that into the second half. Granted, New York is undermanned but they have a lot of good players and they kept fighting. They've got experience and I think that experience kept them in the game.

Nicolas Batum made an effort to be more aggressive

I think so. I think he had a talk with himself. He's been struggling. I talked with him yesterday, he seemed determined to work his way through this.

Goal of your talk with him?

There wasn't a goal. Just to talk and see how he was doing.

I didn't have a goal, just see how he's doing, talk through what he's going through and he wants to play better. He showed tonight that he wanted to get back to where he was.

Damian Lillard, he got hit at the end, any issues?

No issues with him. He does get hit. He takes the ball strong to the basket, you don't want to lose any of that aggressiveness. He had a terrific game as he usually does.

Say anything to them at halftime to turn the game around?

The main thing I said was, we can't slow down. You saw it last night when Denver played, they're on a road trip, I didn't want us slowing down, when they made their runs, we couldn't slow down. Make or miss, push the tempo, get them on their heels a little bit. That keeps our energy into the game.

Pick and roll defense in first half

They had a spacing line-up. They had four shooters with Camby. That creates a problem. The days of the Phoenix Suns and Nash and Stoudemire. It creates a problem. Sometimes we committed too much to the ball and that gave the roll guy [open looks]. Sometimes the roll guy you're afraid to leave Steve Novak on the weakside. There were probably four or five possessions that we didn't handle very well. That's one of the benefits of playing a shooting lineup.

Adjustments to get run to end second quarter

Basically I went back with our big lineup. Matching up with them small didn't work. I put J.J. and L.A. back in the game and that stemmed the tide a little bit.