Dave makes a couple of big announcements! Be sure to read!

As you probably know Blazer's Edge Night is April 17th this year, the last game of the season versus the Warriors. This is the night when we Blazer's Edge readers step up to help create the next generation of Blazers fans by giving underprivileged kids from around the region a chance to do what we take for granted: watch a Blazers game in person. For most of these kids it's the first and only game they're going to see until they grow up and make it on their own.

You wouldn't think a game would be that important. Maybe it's not in the grand scheme of things. But don't tell those kids and their chaperons that on Blazer's Edge Night. Last year we sent over 700 kids. I sat right in the thick of one of the sections, though we stretched across most of one side of the upper bowl. You would not believe what goes on during these evenings.

I always make sure to come early to the arena and get to my seat. One of the best moments of the evening is just watching groups of kids come in. They're in clumps of a dozen, twenty, thirty. They come in through the section doors and you can almost see their pupils dilate the moment their gaze hits the court. Even from the upper sections that Blazers logo is big. The arena itself is huge. The jumbotron has to be seen to be believed. For so many of these kids life happens between two or three well-defined points: home, school, maybe an after-school thing if they're lucky. Between these well-worn destination lies potential for disappointment, sometimes even peril. One person described it to me as a prison without bars. You know the world is out there, but your space is small. You keep to yourself in class. You look straight ahead when you walk home. Sometimes you even have to keep your head down at home. Staying afloat means staying tight and in control at all times.

Now all of a sudden these kids walk into a space that's BIG and unbounded. It's just the excitement, it's the feeling that it's OK to cheer about it. In this place, on this night, you can just let it go and be like everybody else enjoying something really, really good. You can literally see the change when many of these folks set foot in the arena. After they pause in shocked silence to take it all in, they'll inevitably point at the big screen or, if a player is warming up on the floor, at him. They'll elbow each other and say, "Oh my God! That's Batum, isn't it?" And then one or more of them will get in the spirit and just let it loose, right there in the 300's. They'll yell, "BATUUUUM!" loud enough to be heard in the whole arena. Then everybody lets loose and it's an amazing party as they make their way to their seats.

And that continues all...night...long. Every shot, every dunk, every time out music break these kids are rocking it. You have never heard such cheering. It rolls like a wave over the lower bowl. Many of them have signs which they wave trying to get on camera. When they make the screen the whole section screams and high-fives them. I've seen one of our sections win free Pizza Hut pizza and those rows came unglued. The simplest stuff brings the biggest smiles.

And that's not even counting the teachers and other adults who come with the kids. Most of them will come up to say hello at one time or another. I've had everything from handshakes to high fives to hugs. Once or twice people have had to stop themselves from breaking down when they were saying thanks. Most of these folks are teachers, counselors, principals. They work with these kids every day. Some of them have never heard their students speak more than three words at a time. The ones who are most touched, the ones almost breaking down, usually relay stories about how they've never...ever seen these kids able to be kids. But they got in their cars or took the MAX to the arena tonight and everything changed. The students are talking about players and matchups and things they see out the window and somewhere amid that excitement emerges a hopeful innocence that they'd wondered if their kids would ever be able to display.

Yeah, it's just one game. But to so many people it's a brief glimpse into something more.

When people come up to thank me I always try to relay two things:

1. I didn't make it happen. The readers of Blazer's Edge wanted to give this to you.

2. They did it because you're worth it, the kids are worth it, and you all deserve a night to enjoy yourselves.

A month ago we announced this event. Since then we've received several requests for tickets. They're coming in thicker and faster than ever before...in groups of 20, 40, 50. Those folks don't expect to hear a "Yes" to those requests, but that's exactly what we'd like to give them.

Can you help us? Tickets are only $13 each. You can buy one, a dozen, or even just donate $50 or $100 if you wish. It all goes to send the kids and their chaperons. We take no overhead...nothing. 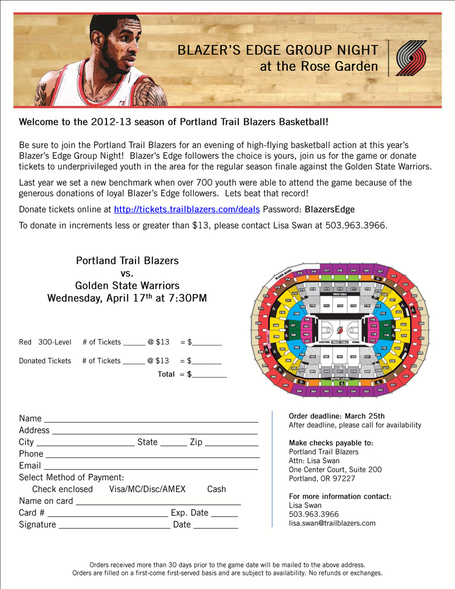 After deadline, please call for availability

Blazer's Edge is looking to add a new staff member. This happens only once in a blue moon so if you're interested in working with us don't miss this opportunity.

We are looking for someone to write Game Previews. I currently do this but I'd like to save more writing time for original work, features, Mailbags, and the like. This is where you would step in.

You will have considerable leeway in formatting the previews but the first qualification is to know the difference between one's own opinion and breaking down a matchup. You need to have a good grasp on the league and its teams, have watched plenty of NBA basketball, understand stats and their significance (or non-significance), understand the ever-changing make-up of the Blazers, and be able to figure out how all of that fits together in the crucible of an individual game. Then you'll need to distill that into an approachable, user-friendly format that informs and entertains.

Indispensable qualities for this position include:

Previous writing experience and basketball experience will be weighed and is certainly an advantage, but lack of prior opportunity will not automatically disqualify you from consideration.

This will be a non-paying position with the opportunity to work yourself into a paying slot with enough time and demonstrated quality. Either way, if money is your main motivator then online may not be for you. Everybody on staff here put in a minimum of a couple years without compensation before seeing dollar one. I even went in the hole with the jersey contest the first few years! That's the kind of love for, and commitment to, the task you need in order to make it in this field.

On the other hand your work will be read by the largest audience in Blazers Nation at a site that's read by everyone to the most causal of fans to the most inside of franchise folks. If you're looking for a foot in the door anywhere in this industry you could hardly get a better start. People who write here don't remain unknown for long.

If you are interested e-mail me at the address below. Let me know a little bit about who you are and I'll let you know about the next steps when appropriate.

Thanks for your consideration on both of these matters.