Dane Carbaugh, who edits the Blazers blog AYoungSabonis.com, will be providing the occasional column for Blazersedge this season. Carbaugh will put together playbook-style video breakdowns to accompany his written observations.

His previous posts can be found at this handy link.

As Ben pointed out in his Media Row Report on Tuesday, LaMarcus Aldridge is shooting 57.9 percent from the left wing, which is better than many players shoot at the rim. It's forcing teams to think about the way they play Aldridge, and teams like Phoenix and Chicago have decided to double him from the opening tip.

Opponents are trying to take away the left baseline turnaround with a trap, usually with another post. Individually, Aldridge will often make two choices.

The first is to move away from pressure and drive to the lane. This collapses the defense for an assist opportunity, or gives Aldridge a shot at the rim where he's shooting 58.5%. 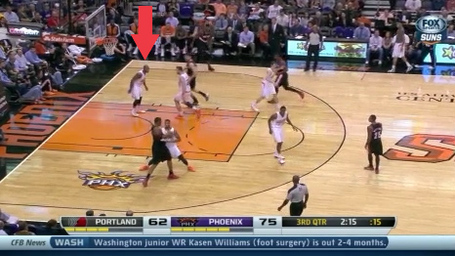 Caption: Aldridge in triple threat stance freezes the help defender into guarding the lane instead of looking to double.

Less common is his faceup move, which puts him in a triple threat position. Aldridge is quick enough to put the ball on the floor in that situation, and he can drive baseline or to the lane. It forces the help defender to stay home and guard the lane, taking away the an opportunity for a baseline trap.

As a team, Portland does a good job of organizing quality shots out of the baseline double team. The most common set involves Robin Lopez or Joel Freeland on the block opposite Aldridge. A wing remains on the arc directly above Aldridge on the left side, while the other two wings setup at the free throw line extended and in the far corner, outside of the three point line. 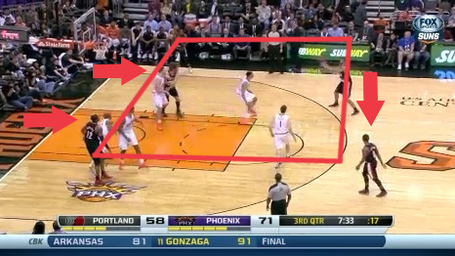 Caption: A two-low set on the double team, with Aldridge and Lopez on the block and the Portland wings squaring the floor.

The key action for Portland on the double team actually happens on the opposite block. As teams use both post players to double Aldridge, it leaves a backside wing defender to play help defense on Robin Lopez and on the Blazer wing standing in the corner.

That's where it gets clever.

When the double comes to Aldridge, Lopez will immediately make a cut to the lane. This forces the wing help defender to engage with Lopez to keep him out of the lane, guarding against an easy layup or position for a possible rebound. This is essentially misdirection. 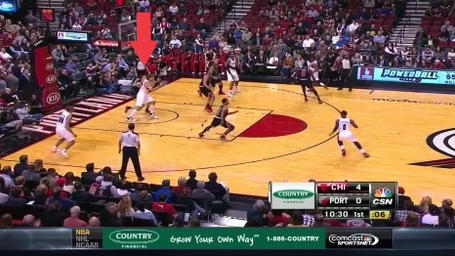 Caption: Robin Lopez essentially screening the help defender out of the play on the backside.

As Lopez pushes for position, Aldridge will swing diagonally to the wing on the opposite elbow, who skip passes to the shooter in the far corner. With the wing defender occupied trying to force Lopez out of the lane, it allows the man in the corner an open look at a three pointer.

The two-low set is not the only way Portland works around the double team. The Blazers will often put their other post at the free throw line instead of the low block in order to stretch the defense. This forces opponents away from doubling on the baseline. Many times, teams will double anyway, and it leads to an easy cut down the lane for a dunk by Lopez or Joel Freeland. 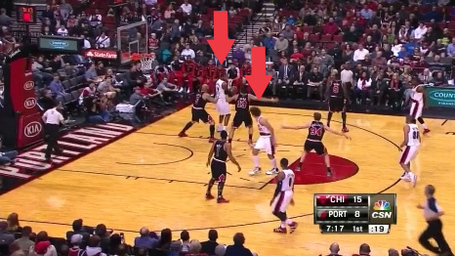 Caption: Chicago doubles with Lopez at the free throw line, leaving the lane wide open for a cut to the basket.

The Blazers are still working on their strategies against teams doubling LaMarcus Aldridge, and Aldridge himself is plotting his adjustments in nearly real time with the help of an iPad when he's on the bench. As the Portland forward continues to put up All-Star numbers, more and more teams will try and deny him a look at the basket. Don't be surprised to see these variations from Portland on offense get more complex as teams gameplan for Aldridge's unstoppable turnaround.

Note: Stats used are through Monday.