Two days, two instant classics. In yet another wild game amongst contenders, Portland held off Oklahoma City for a team-defining victory. Portland solidified the outright #1 position in the Western Conference.

Take a look at the standings, Blazer fans (click for bigger!): 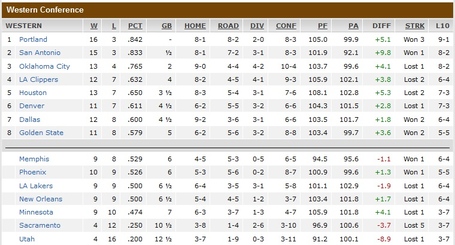 And on top of that, the Blazers now own the NBA Championship Belt!

First Half: Both teams played to a standstill. The Blazers struggled from downtown, but made up for it. Portland struggled with their rebounding, missing opportunities at both ends and giving Oklahoma City second chances. Despite that, The Blazers stayed close through most of the half with some scrappy play. However, OKC pushed the lead from 3 to 12 in the last 54 seconds, thanks in part to a surge from their dynamic duo.

So the Wolves and the Spurs are supposed to play in Mexico City tonight. But apparently their is an electrical fire somewhere and smoke everywhere in the arena and everyone is evacuating. That’s not going to help the NBA play in other international cities, lol
by JP503

Dave was right? Spurs broke the game; no more basketball left to win.
by BlazersMakrReturns

Third Quarter: Aldridge reminded everyone why he's getting all kinds of All-Star talk but coming out of the locker room on fire. Not literally, that sounds bad right after the quote above. OKC was forced to call timeout when their lead shrunk to 4. They tried to hold the Blazers back, but they found their groove. Wesley, Nic and LaMarcus all scored to push the Blazers ahead by 3! Oklahoma City wasted no time calling another timeout. The stopped the run, as the teams played back-and-forth for a stretch, with OKC tying the game with less than 2 minutes left. But Mo Williams sank a beautiful three-pointer keep the lead heading to the fourth.

I think [Westbrook's] more Han Solo-y… ya can’t tell him the odds of whether his 3’s will go in, plus that bounty hunter back in Ord M’ilwaukee maybe changed his mind on whether or not to pass to Durant more.
by Mortimer

And, much to Durant's chagrin,
Westbrook shot first.
by GMan83201

[This was from earlier today, but I enjoyed it too much not to quote it]

Fourth Quarter: Thomas Robinson gave the Blazers an early 5 point lead, but they couldn't keep it, as OKC's bench held strong. Dorell Wright picked up the Blazers with a big three-pointer to keep the lead as the starters continued to rest, then followed it up with a nasty block, leading to Lillard for three.... swish! The Blazers suddenly had a 7 point lead with 8 minutes left, and OKC called timeout!  They quickly brought the big guns back into the game, and the Blazers followed suit shortly after. But in that short gap, OKC quickly scored 5 points to pull back within one possession.

With 6 minutes left, Matthews' free throws kept the Blazers ahead by 4, The teams traded buckets until Westbrook swished a three to make it a one-point Blazer lead. When free throws quickly gave OKC control. Lillard returned to the game. The teams swapped leads over the next minute, but Aldridge swished another shot for a three-point lead! Westbrook got the points right back as the clock ticked under 3. The Blazers went right back to Aldridge, who scored again! The battle was ON. Stotts took a timeout, and set up an Aldridge jumper, swish! The Blazers lef by 5 with 2 minutes left. OKC immediately scored, then Westbrook scored on the break. Batum missed a wide open three, and OKC got the ball with a chance to take the lead. Durant missed a three, and the clock ticked under 1 minute!

Matthews took a three for a four point lead... but missed! As OKC went for a three... Ibaka committed a moving pick and the refs caught it! Blazer all with 37 seconds left, leading by 1! They gave the ball to Batum for three... SWISH! Blazers led by 4 with 29 seconds left! OKC called timeout, and went to Durant... who bricked a three-pointer! Aldridge grabbed the rebound and was fouled with 24 seconds left. OKC missed again, fouled the Blazers again, and OKC Coach Scott Brooks picked up a Technical Foul! Everything fell apart for OKC, as the streamers fell, the crowd celebrated, and the Blazers defeated Indiana and Oklahoma City in consecutive games.

Stay tuned for more later tonight from Ben and Dave. The Blazers now get a day off, and play rare back-to-back home games Friday and Saturday, against Utah and Dallas. -- Tim

Comments of the night!

Thanks to everyone who participates in our nightly Gameday Threads! I always quote a few favorites in the recap, but for a little extra fun, these were the most popular comments of the night based on number of recs: