A video breakdown of Portland Trail Blazers forward Thomas Robinson's role in the offense this season, and why it might have led coach Terry Stotts to replace him in the rotation with Meyers Leonard.

Dane Carbaugh, who edits the Blazers blog AYoungSabonis.com, will be providing the occasional column for Blazersedge this season. Carbaugh will put together playbook-style video breakdowns to accompany his written observations. His previous posts can be found at this handy link.

Here, Carbaugh takes a look at Blazers coach Terry Stotts' decision to move Meyers Leonard into the rotation at the expense of Thomas Robinson, and why Robinson's impact on Portland's offensive spacing likely played a key role in the decision. -- Ben

Portland Trail Blazers center Meyers Leonard has been moved into the rotation at the expense of Thomas Robinson. Coach Terry Stotts said the move was made to stretch the floor, as advanced stats indicates the Blazers' second unit suffers on offense with Robinson on the floor.

The second-year forward is quick to dribble into the heart of the paint on offense, even if he receives a pass on the high post. Opposing defenders will cede the long jumper to him, packing three or four defenders within six feet of the basket. 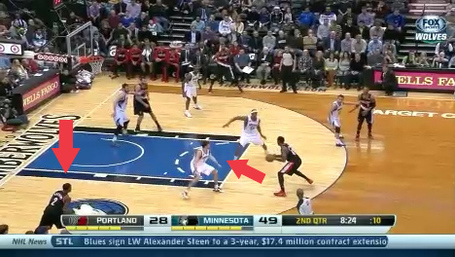 In this example against Minnesota, Dante Cunningham drops down to the lane as Robinson receives the ball on a pick-and-roll. Instead of taking the open jumper or splitting the help defense to open up Wesley Matthews in the near corner, Robinson pushes to the rim and back into the teeth of the defense. 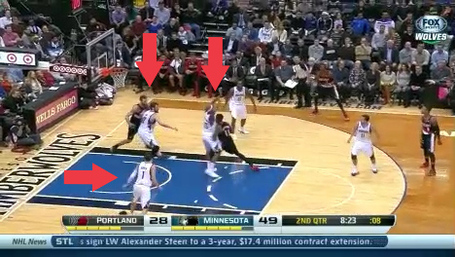 As he goes up for a contested layup, three defenders are jammed around the bucket to stop him from scoring.

The problem is so bad that opposing teams don't even bother to guard him in help situations, instead waiting until Robinson drives to the paint and contesting him at the rim. 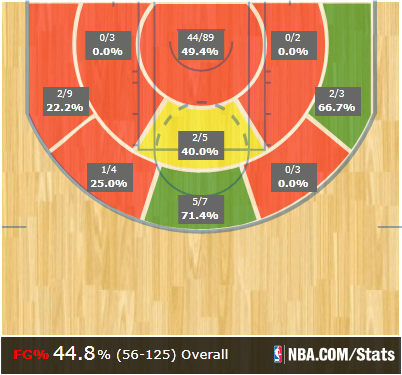 As his shot chart from this season shows, Robinson isn't a particularly good (or eager) shooter from the mid-range. With his offensive play being so predictable, his finishing rate at the rim has suffered. 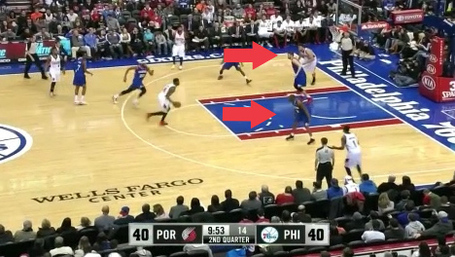 In this play against the Philadelphia 76ers, he receives the ball at the top of the arc on a pick-and-roll. The help defender on the weak side never leaves Dorell Wright, and Spencer Hawes is glued to Joel Freeland. 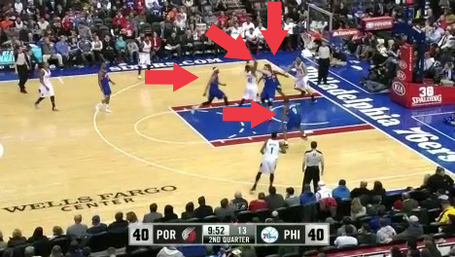 Instead of taking a one-dribble jumper, Robinson drives directly at the rim, which the Sixers have packed with four defenders. The result is a blocked shot, and a change of possession.

Portland has a lot of sets in which curls or backdoor cuts are involved, and they only work if there isn’t a rim defender sagging to the lane to stop them. With Robinson, many of those plays aren’t possible.

With Aldridge and Leonard spacing the floor, there are usually just one or two defenders down low, if any, opening up the paint. 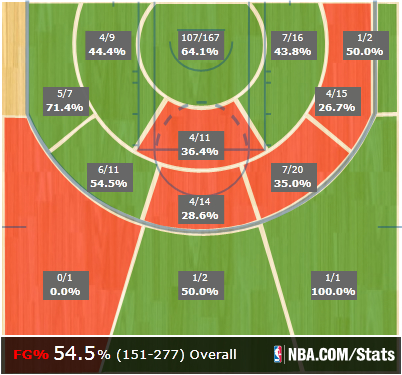 Above is Leonard's shot chart from last year: although he wasn't a guaranteed knockdown shooter, he found a way to be effective on mid-range shots from a number of locations over the course of the season. He will likely play the same role as LaMarcus Aldridge, feeding off the high post.

Finally, there should be some mention of other intangibles between Leonard and Robinson. Looking at per-36 minute statistics from this season, Leonard is a much better shot-blocker, free-throw shooter, and he produces less turnovers. Leonard (10.9) and Robinson (11.5) rebound at a similar rate, although it should be noted that the former Kansas star grabs more contested rebounds.

Comparatively, the two players are a wash on defense. But the Blazers' offense is intricate, and it requires certain production from the high post. With Leonard getting minutes, Stotts is hoping he can boost a lagging second unit on that end of the floor.