Portland writer Mike Acker has written a cover story about the Portland Trail Blazers for the Willamette Week.

The Blazers' past team-building efforts included trading high draft picks on risky players and hoping they'd pan out, like journeymen center Marcus Camby and small forward Gerald Wallace, that came with an attached disclaimer: "He'll be even better when Greg Oden is healthy enough to play 80 games."

Not this season. [Blazers GM Neil] Olshey made a decision that winning in 2013-14 was of the utmost importance. He acquired veteran guard Mo Williams from the Utah Jazz to back up Lillard and brought in 3-point specialist Dorell Wright, instantly improving the Blazers' previously woeful bench. He matched the Minnesota Timberwolves' offer for Nicolas Batum, signing him through 2016. And he traded for Robin Lopez, the first true center the Blazers have had since Oden.

Olshey made a decision that winning now was of the utmost importance, and to reward his diligence, that's exactly what the team is doing.

The full piece is here.

Here's a look at the cover, which includes a photo of Blazers forward Lamarcus Aldridge, via @YucciMane. 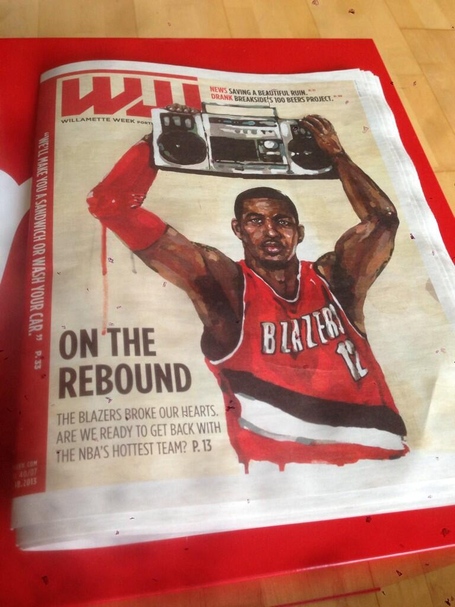 The art is done by Jeremy Okai Davis.

PS Israel Bayer and Street Roots are teaming up with Willamette Week to give away an autographed 2013-14 Blazers basketball. Details here.