A video breakdown of the progress made by Portland Trail Blazers guard Damian Lillard on the defensive end.

Dane Carbaugh, who edits the Blazers blog AYoungSabonis.com, will be providing the occasional column for Blazersedge this season. Carbaugh will put together playbook-style video breakdowns to accompany his written observations. His previous posts can be found at this handy link.

Here, Carbaugh checks in on the progress made by Damian Lillard on the defensive end. -- Ben

Damian Lillard is an electric offensive player, but as the second-year guard continues to log minutes, many are wondering just how good he is on the defensive end of the floor.

We can look at his points per possession allowed (PPP) to get a baseline of where he's at compared to last season. While not an exact indicator of defensive value, PPP gives a general idea comparatively within the context of team defense and success. 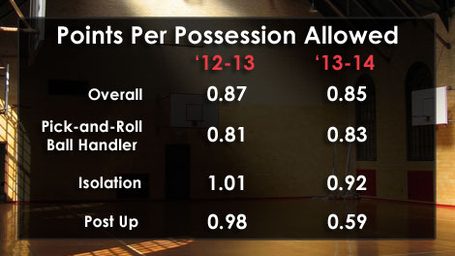 Damian Lillard has improved his PPP numbers in nearly every major category in 2013-2014.

He's made noticeable improvement in almost every major play type this year save for a .02 PPP increase in the pick-and-roll. He's a little better in isolation, and much better in the post. That being said, there are a few areas Lillard needs to work on.

First, he has a tendency to jump plays in isolation. Lillard plays quick and tight, and a simple hesitation move can get him to bite. Because of this, he's often open to the double move as players crossover or give him an in-and-out dribble. His hips end up out of position, and he gives up open lanes.

Consistent effort in transition is something I've already talked about in breakdowns, but it's worth pointing out again. When Lillard is caught underneath the free throw line on offense in transition, he rarely makes an effort to get back on defense. His teammates could use an extra hand, especially against the secondary break as they set up a quick play in transition. The last two weeks we've seen him getting back on defense, and I suspect the coaching staff has stressed the importance of his effort.

The big question with the Blazers point guard is, of course, his pick-and-roll defense.

Portland's opponents have taken a greater number of shots in the pick-and-roll this season. Proportionally, Blazers opponents are involved in 7.9 percent more PNR plays this season than they were in 2012-13. This has led to a 9.1 percent drop in spot up attempts as Portland's ICE pick-and-roll defense and consistent rotations allow less open shots on the extra pass. 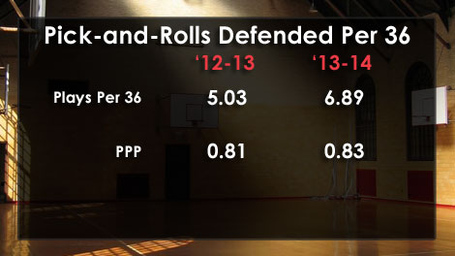 Lillard has seen himself involved in defending the pick-and-roll more often than last year.

In turn, Lillard is defending the pick-and-roll more often. He is involved in almost two additional pick-and-roll plays per 36 minutes than in his rookie season. That his points per possession allowed hasn't spiked with increased responsibility guarding the pick is an indication of some improvement.

However, he does struggle when it comes to fighting over screens. He appears to lack some spatial awareness, and his attacking angle is often incorrect. 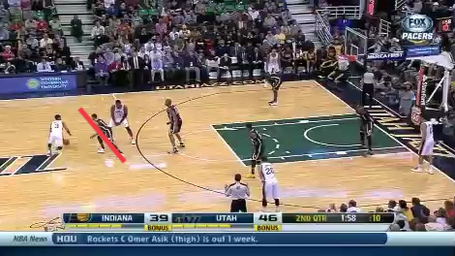 George Hill steps up and away from the oncoming screen.

The league's best point guards step up the court and away from the screen when fighting over the top in the ICE pick-and-roll defense, Portland's chosen system.

Lillard gets caught up on so many screens because he takes a perpendicular angle when trailing the ball-handler. His first step is often lateral instead of up the court. He will try to rub off the hips of the screener in an attempt to stay close to the ball handler, and instead gets trapped in the screen. 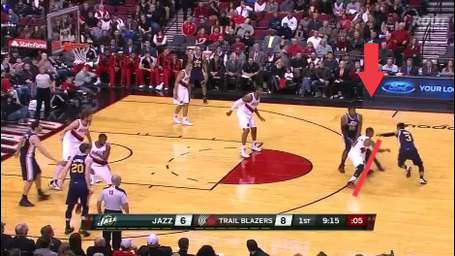 It's possible this is how the Portland coaching staff is instructing him to play these screens. Even if that is the case, he gets stuck out of the play too often, leaving the post defender to cover two offensive players. There needs to be an adjustment in his positioning so he can get up and over screens properly.

Now, it's not all criticism for Lillard. One area which it appears he's made a significant improvement is in his post defense. At 6-foot-3 and 195 pounds, he's not the biggest point guard in the NBA. Teams have tried to post their bigger guards on him, and the results for Portland have been fantastic.

Last year, Lillard struggled down low allowing 0.98 points per possession. He would give opponents too much space, and hedge himself square below their hips. This allowed players a strong move to the inside of the lane for a hook shot. 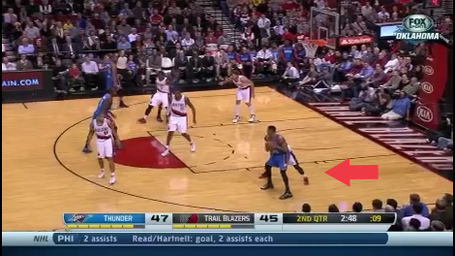 Lillard shades to the lane to force Sefolosha to the baseline.

This season, he is shading himself to the inside hip, allowing space on the baseline for a difficult turnaround jumper. That allows Portland bigs to slide over and provide backside help (Chris Paul baits opponents into easy blocks this way frequently). Lillard has been excellent in the post this season, allowing just 0.59 points per possession.

Despite some issues in his game, Damian Lillard is an average defender for his position. It's early in his career, and he's still learning how to play defense against advanced NBA offenses. If his improvement in the post this season is any indication of how he can further develop the rest of his defensive game, there's no doubt he will get better and better on that end of the floor.

Note: Stats used are through Dec. 6. Video via MySynergySports.com.