In one of the most epically aggravating games of the season, The Portland Trail Blazers quickly opened a 17 point lead on the Los Angeles Lakers, only to give it up, then go back up by 20 points, then give away that lead as well. But the Blazers held on late for a huge win to take over the #1 spot in the Western Conference.

Share All sharing options for: Final: Blazers Hold Off Lakers, 114-108

The Blazers were led by LaMarcus Aldridge's 27 points and 9 rebounds and Damian Lillard's 26 points and 9 assists. They were supported by the other starters, Robin Lopez (12 points, 12 rebounds), Nicolas Batum (a 3x9: 9 points, 9 rebounds, 9 assists), and Wesley Matthews (17 points).

First Quarter: The forecast is for chilly weather in Portland, but the Lakers were already ice cold. They lofted brick after brick to start, and the Blazers took advantage, forcing a timeout after Lillard hit a three-pointer to take an 11-0 lead in the first four minutes. It didn't help; the Lakers scored once, but the Blazers dominated them to take a 17 point lead (19-2!) at the halfway point. Unfortunately it came too easy, as the Blazers started getting cute, with poor three-pointers, saving the ball under the opponent's hoop, and unnecessary behind-the-back passes. Predictably, the Lakers took advantage and Blazers Coach Terry Stotts called timeout. The run was over, as the Lakers started actually hitting their shots, helped by more lazy turnovers by Portland. The Blazers still held the lead despite dumb decision after dumb decision, highlighted by the final 10 seconds, as Dorell Wright grabbed an offensive rebound. Instead of holding for the last shot, he quickly jacked up a three pointer, which missed badly, allowing Steve Blake to swish a three-pointer at the other end.

It was the tale of two quarters: One half brilliance, one half facepalm.

It's not that Lakers are good, rather the Blazers are doing some stupid things.
by mora2

Second Quarter: Portland's bench showed their defensive struggles, immediately allowing a wide open three-pointer and a dunk. Stotts was forced to immediately bring some of his starters back into the game. They were able to score, but were no more successful on defense, allowing more easy Laker points. With the big early lead long gone, the Blazers fought a re-energized Laker team for control. The Blazers stopped doing what got them the lead, with Aldridge still on the bench. The Lakers easily hit layups to tie the game at the halfway point, and another three-pointer gave them the lead. The Blazers regained the lead as Aldridge took over the game, but the Lakers stayed close.

Seems like both teams are scrambling for shots, and the Blazers don’t seem to be as good at it as the Lakers.
by jeremyse

Fourth Quarter: The teams' benches combined for 2 points in the sloppy first three minutes. When the Lakers cut the lead to 16, Stotts took no chances and called a timeout. The sloppy play continued, as Portland didn't score for the first six minutes of the quarter, and the Lakers closed to within 10. After Aldridge made one free throw to finally get the Blazers on the board, the Lakers promptly swished a three. That feeling of deja vu returned.

Mo Williams finally hit a shot to give the Blazers a 10 point lead... then fouled the Lakers on a three-point attempt, leading to a four point play. Lillard was stuffed on a fast break, leading to a Laker fast break to close the gap to 2. After Aldridge stopped the bleeding, the Lakers got free throws. They hit the first and missed the second... only for the Blazers to allow an easy tip-in. With 3:30 left, the Blazer lead was down to 1. Out of a timeout with 2:40 left, Lillard was set up for a three... and swished it to quiet the crowd. As the Lakers struggled to score, Aldridge somehow was called for an offensive foul away from the ball to give them another shot. However, the Lakers promptly turned it over, giving Wes Matthews free throws and a 6 point lead overall. Up by 4 with 1:20 left, Matthews took a contested three-pointer, and swished it for a 7 point lead!

As the clock ticked under a minute, the Lakers scored, and Batum missed a three. Portland fouled on the drive, and found themselves ahead by 3 with 40 seconds left and the ball. They gave it to Lillard, who was fouled on the drive. He hit one of two, to give the Blazers a 4 point lead with 23 seconds left. The Lakers inbounded the ball, and scored a layup in two seconds. Seriously. Mo Williams was fouled in response, with 18 seconds left. He calmly sank both, as the Lakers called timeout. The Lakers attempted a three... only to be blocked by Lillard! They were finally out of comebacks, and the Blazers held on for a victory that was exhausting for everyone, including the fans.

The Blazers are right back in action tomorrow night in Portland, against the top team in the NBA, the Indiana Pacers. Stay tuned later for guaranteed-fascinating analysis from Dave. -- Tim

Top Of The Mountain: 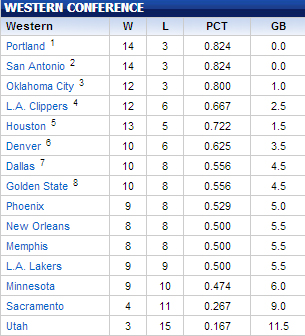 Comments of the night!

Thanks to everyone who participates in our nightly Gameday Threads! I always quote a few favorites in the recap, but for a little extra fun, these were the most popular comments of the night based on number of recs: