A video breakdown of the Portland Trail Blazers' new approach to pick-and-roll defense.

Dane Carbaugh, who edits the Blazers blog AYoungSabonis.com, will be providing the occasional column for Blazersedge this season. Carbaugh will put together playbook-style video breakdowns to accompany his written observations.

His previous posts can be found at this handy link.

The Portland Trail Blazers have talked extensively since Media Day about their new approach to playing pick-and-roll defense. Here, Carbaugh breaks down what's different between their current scheme and the one used during the 2012-13 season. -- Ben

Last year, Portland ran a pick-and-roll defense that hedged high and hard on screens. It was a typical help-and-recover that forced the post player to guard the ball handler from turning the corner on the pick and driving to the lane. LaMarcus Aldridge proved confident and mobile enough in the system, but the weak point was JJ Hickson.

The former Blazers center was often out of position as the final defending post player, late to rotations and unaware on the defensive end. While guarding the roll man, Hickson was too slow to recover and put the onus on his teammates to help defend his mark. 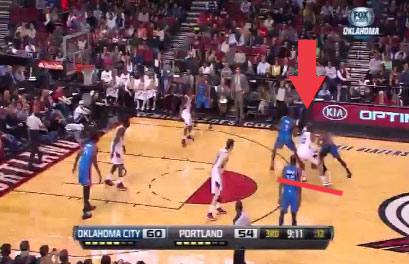 Portland used a hard hedge pick-and-roll defense in 2012-2013 with the post defender at a 90 degree angle facing the sideline to stop the ball handler turning the corner.

The basic strategy is fairly simple. Instead of switching or hedging, the defending guard will try to fight over the top of every screen. As they fight over the screen, they put backside pressure on the ball handler and make quick three-pointers uncomfortable. Meanwhile, the post defender sags back, usually around the free throw line, with the intent to guard the lane and prevent penetration. 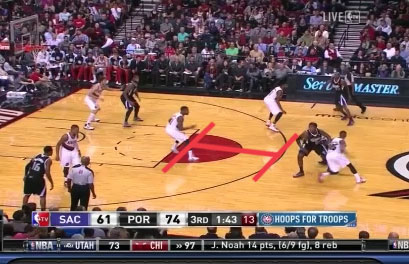 This season Portland is employing a soft ICE pick-and-roll defense, with guards fighting over screens and posts protecting the lane.

This version of the ICE defense allows Portland is to push ball handlers off the three point line, and stave off the easy layups in the paint they gave up last year. The open spot on the floor for opposing offenses becomes the 15-18 foot jumper, one of the most inefficient shots in basketball. The Blazers are trying to get teams to shoot long jumpers and rely on statistical averages to sustain their defense.

The most interesting part about Terry Stotts' switch to the ICE defense of the pick-and-roll is Portland's dedication to it. In Indiana, the Pacers will often cut under screens set high above the three-point arc. And when the play involves their power forwards, they will instead use the hedge technique due to their mobility.

Portland doesn't have that kind of flexibility. They stick to the soft ICE technique on each pick-and-roll. Damian Lillard and Mo Williams play opposing ball-handlers tight, and far from the hoop. Guards are supposed to try to fight over the top on screens, and no matter which Blazer post is guarding the roll man they always stay soft to the lane. It's an important distinction that makes the Blazers defense rather unique.

By ceding open jumpers, Portland is trying to play the odds of advanced analytics. Terry Stotts is often heard talking about things like eFG% and per-36, so the defensive strategy around his soft ICE pick-and-roll defense isn't surprising. Portland is holding opponents to just 42.3% eFG in the pick-and-roll this year compared to 49.7% eFG last year. That's the early-season improvement Stotts was looking for. Time will tell whether the strategy will continue to bear fruit for the Blazers.