Chris Haynes of CSNNW.com has the best quotes yet from Portland Trail Blazers coach Terry Stotts on his team's heavy reliance on three-pointers.

"When Rick Pitino coached the [Knicks], they shot 50 percent more threes than the next team. That amount would have been 29th last year. It's all relative. 25 years ago that was out of the box thinking. Now, it's not shooting enough threes. I think you have to coach your team and play to your strengths. I don't want to apologize for having good shooters."

The season Stotts is referring to is 1988-1989, when the Knicks attempted 1,147 threes to lead the league. The Sacramento Kings finished second with 824 attempts. That's not quite "50 percent more" but it was a massive gulf.

For comparison's sake, the Knicks led the NBA last season with 2,371 attempts and the Houston Rockets were second with 2,369 attempts. As Stotts noted, 29 teams shot more than 1,147 threes (the Memphis Grizzlies were the only exception) in 2012-13.

Here's a chart that reinforces Stotts' point about the changing nature of the game. 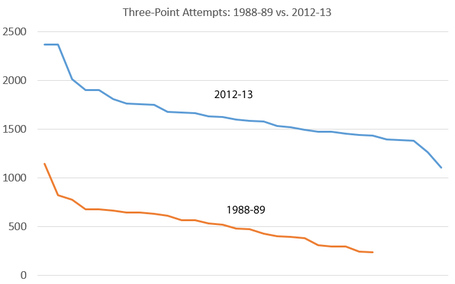 The New York Times created this chart in 2009 to show the rise of three-pointers over the last few decades. 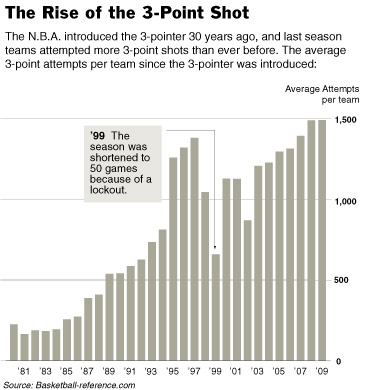 The trend has continued upwards since the chart was published.

Entering Thursday, Portland ranked No. 4 in three-point percentage (41.5 percent), No. 6 in attempts and No. 3 in overall offensive efficiency in the NBA. Wesley Matthews (50.0 percent), Dorell Wright (45.5 percent), Nicolas Batum (40.9) and Damian Lillard (39.1 percent) are all off to nice starts from beyond the arc.

Dane Carbaugh broke down some video on the three-pointers earlier this season.