A video breakdown of Portland Trail Blazers center Robin Lopez making an impact in the paint this season.

Dane Carbaugh, who edits the Blazers blog AYoungSabonis.com, will be providing the occasional column for Blazersedge this season. Carbaugh will put together playbook-style video breakdowns to accompany his written observations. His previous posts -- on three-pointers and on transition defense -- went up last week.

Here, Carbaugh looks at how new Blazers center Robin Lopez is fitting in so far this season. -- Ben

After several double-digit rebounding games, Portland seems to have settled the question mark at the center position in Robin Lopez. He's been putting in serious work on the low block for the Blazers, and game film shows that the acquisition of the young center was another smart off season move for the organization.

Lopez isn't an All-Star caliber center, nor is he a dominant shot blocker. That being said, his size and his length allow him to at least alter shots at the rim when he doesn't get a hand on them. By changing the arc on shots in the paint, Lopez is able to clean up the glass as soft rebounds glance off the bucket. Lopez is able to create changes in possession with his defensive ability without blocking shots.

Watching him move around the court, he's also well-disciplined in the painted area. He's rarely locked under the basket, and he spends most of his time outside of the restricted area. Lopez is a keen observer of the offense, and doesn't rush the rim on plays where he's six or more feet from the basket. The Blazers center has a nose for the ball, fighting through arms and distancing himself where he can't be boxed out properly.

Perhaps most important is Lopez's own dedication to the art of the boxout. As shots go up, game film shows Lopez turning to match up with the biggest player in his area rather than ball-watching or running to the rim. That results in his ability to create early position and out-muscle some of the best rebounders in the game. 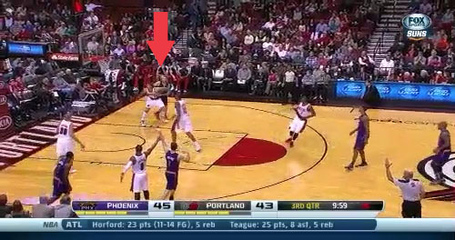 Lopez stays disciplined and gets a clean boxout on Miles Plumlee far away from the basket.

It's his per-36 numbers that tell the real story. 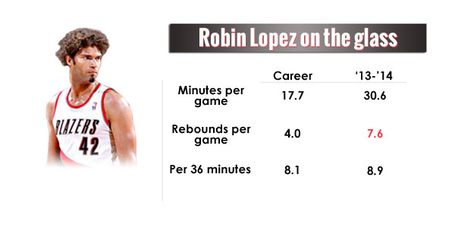 Per-36 stats are a number that helps standardize per-game production for players who may not see the floor as much as a normal starter. In this case, Robin Lopez is a perfect example. The goal of using the per-36 stat is to get a better understanding of who does the most with their time on the court on a per-minute average, extrapolated to starters minutes.

Right now, Robin Lopez looks exactly like what the Blazers were hoping for.

Note: All statistics through Saturday.