A video breakdown of the Portland Trail Blazers' struggles with transition defense and potential areas for improvement.

Dane Carbaugh, who edits the Blazers blog AYoungSabonis.com, will be providing the occasional column for Blazersedge this season. Carbaugh will put together playbook-style video breakdowns to accompany his written observations. His first post on three-pointers went up earlier this week.

Part of the Blazers' issue with conceding a high FG% in the painted area has been turnovers leading to easy fastbreak attempts for opponents. While not awful, Portland is a middle-of-the-pack team as far as points allowed per game in transition. Strategically, stopping the break for Portland means keeping games in reach when they're within single digits, and making sure they can hold off late-game surges from teams as they lead.

Surprisingly, it's Portland's spacing that gets them in trouble against the break. Game tape shows the most effective breaks are coming against Portland when their wings are locked into the corners. They aren't squaring the floor, a basic spacing concept that puts players at even distances from each other around the court that allows for passing lanes and useful positioning when transitioning to defense. 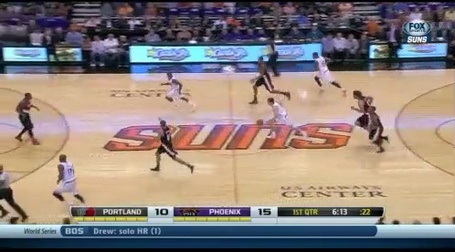 Damian Lillard fails to get back on defense, lagging even behind Robin Lopez

At times, basic effort on defense is fleeting. While Batum will get a trackdown block or two, he tends to give up if he's gone hard for a rebound in the painted area and come up empty. The same can be said for Damian Lillard, who will take a split second to mope after a missed layup attempt instead of using his quickness to get in front of his mark, who is often leading the break the other way.

Portland has a tendency to ball-watch on offense. As shots go up, wing players aren't committing to offensive rebounding or at getting back on defense, instead choosing to hover at the arc hoping for a kickout on an offensive rebound. That kind of inactivity is a recipe for a disaster. 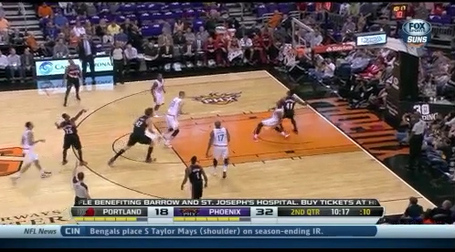 All three backcourt players for Portland are watching Mo Williams' shot attempt as Gerald Green slips past them to the bucket.

The Blazers are leaving themselves open to easy opportunities on the primary break -- an initial play with an advantage to the offense. Portland rarely forces teams into what's called the secondary break, where trailing players setup a quick screen or post play if the initial run has no advantage.judgmen

Most important is that Portland simply doesn't communicate on the break. Players are picking lanes on best judgment, but aren't giving directions or calling out assignments. Portland needs to give a more concerted effort to have a defensive point player guarding the ball and directing players behind him. 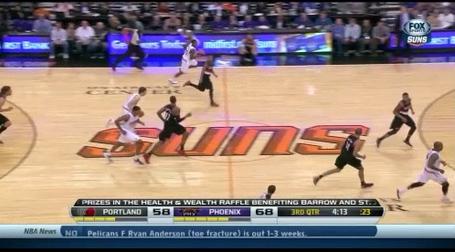 Nic Batum and Damian Lillard fail to give each other any direction despite being just a few feet from each other.

As a gameplan, stopping the fastbreak for Portland is crucial. In their five wins this year they are a combined +11 in fastbreak points. In their two losses they are a combined -25. Portland's high-powered offense is part shooting, part rhythm, and all confidence. When teams string together easy buckets down the floor, they lose their rhythm and put themselves in the position to lose games.