The Portland Trail Blazers defeated the Atlanta Hawks, 84-78, in a Summer League game at the Cox Pavilion in Las Vegas on Thursday afternoon, improving their record to 2-1 during 2012 Summer League play.

Grand openings are a big deal in this city and this game was one or, really, two.

Blazers rookie point guard Damian Lillard played well in his first two games this week but clearly took his game to a higher echelon against the Hawks with Nolan Smith (concussion) and Wesley Matthews (old age) not available to play. Lillard opened up a full bag of tricks on the court and he opened mouths wide with the best of his best, namely a poster dunk over Keith Benson that wound up near the top of SportsCenter's plays of the day.

"It was a gap, that was pretty much it," Lillard explained. "I saw a gap. If I didn't explode it was going to get blocked. These guys in here are athletic and have long arms. I got one of my shots blocked when I didn't explode to the rim so it was only necessary. I had to raise up. I probably caught them off guard, but I've done it plenty of times. Once I took off, I knew what I was doing as soon as I picked the ball up."

As powerful and vicious as that dunk was there is an argument to be made that it was only his second best play of the night. The other contender: an absolutely gorgeous left-handed bounce pass ahead to a streaking Will Barton for a transition lay-up. Lillard has shown a propensity for driving left through Portland's three games but the skill level involved in making that type of pass with your off-hand, at full speed and with the proper tough is extremely uncommon, even at the NBA level.

"Dude, just admit you're ambidextrous." Yes, that qualified as a legitimate post-game question given the circumstances.

"Since I've been younger, my dad made me and my brother play Horse with the left hand just to develop our left hand," Lillard explained. "In college i did a lot of workouts, everything I did with my right I wanted to do with my left. Passing, ball-handling, floaters, sometimes mid-range shooting with my left hand. It's just playing in my favor now."

Lillard's play sparked a late "M-V-P" chant from a true Blazermaniac and it also led a group of fans to scream for his teammates pass him the ball as he stacked up points seemingly at will in the game's closing minutes. The final damage: 31 points, 7 assists, 3 rebounds and 3 turnovers, on 11-for-22 shooting and eight free throw attempts. He finished an excellent and-one late after contact, moved through Atlanta's team defense with ease and, if there was a flaw to be found, it was that he got a little too highlight happy with the game coming so easy, making a few unnecessary turnovers you would (hopefully) never see in a real NBA game).

The gushing that will result over Lillard's play is deserved. Put as many caveats as you want on the importance of Summer League, he's proven that he belongs and he's kept his head about him. He's been pure class off the court, too, remaining patient and staying late to answer every question even though he's being dragged in a lot of different directions as one of the Summer League's stars. Watching it unfold, it's understandable how a dinner interview with him during the pre-Draft process might immediately end a team's pre-Draft debate.

His wasn't the only opening, though. To this point in his coaching career, Blazers interim coach Kaleb Canales has been known for two things: 1) Being the nicest person in the entire world when there are no cameras or microphones around him and 2) wearing a chastity belt on his mouth any time a red light blinks or a tape recorder comes out.

Needless to say, his silence has been frustrating. Having covered his team for five years, understanding his dedication to his craft, and getting a sense for his basketball knowledge and personality, it's been cringe-inducing at times to listen to him after games. That's not an unfair or reckless statement. Canales knows what he's doing when he goes to the blandest bag of cliches out there. He's young but he's very, very bright.

Thursday was an opening for him too and it came at Summer League, his ideal environment: Basketball for eight hours a day, nothing but industry people and diehard fans, no frills, just a lot of raw stones needing polish. That's what excites him. He's the type of coach, I would wager, who would rather work with Bismack Biyombo than LeBron James. He's a life-impacter and a game-improver. That's why every young player that's come through Portland over the last five-plus years swears by him.

Following the game, Canales spoke at length, not only about the victory in general but also about the area that he's been working with Lillard the most: defensive responsibilities. The coach who couldn't go 20 seconds without a "We played [or didn't play] Blazers basketball" even dug into his backpack and broke out a pen and paper to fashion an impromptu diagram of Lillard's off-ball responsibilities and team defensive positioning on a play chart. 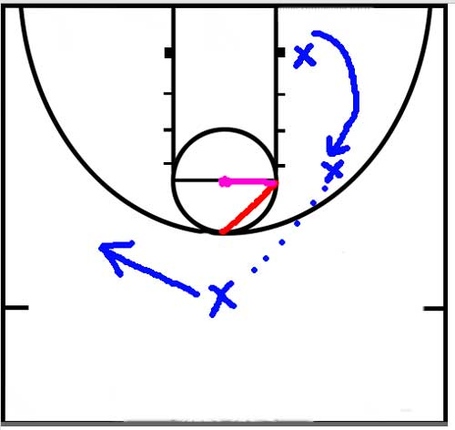 Blue is offense and Lillard's defensive movements are mapped in purple and red. In the diagram, you see blue's point guard passing the ball to a wing who is coming off of a curl screen. Portland wants Lillard to first shade to the ball-side of the free throw line to help protect against the immediate drive (the red line) and then retreat as blue's point guard spaces the floor to the weakside (the magenta line). The key is for Lillard to "get to the nail."

The Blazers feel that provides the right congestion in the lane, the chance for Lillard to dive or gamble for a steal if the wing puts the ball on the floor, while still allowing him enough time to recover and play good defense if the ball reverses to his man. It's easy for young point guards to either get lazy or float in these situations and Canales said that he's been stressing the importance of committing to the exact spacing play after play; In the first two games, Canales felt that Lillard hadn't been consistently following the designed spacing, instead sticking with his mark more tightly on the perimeter than was necessary. If one of Portland's wings got caught up on the curl screen, the middle of the Blazers defense was overly exposed.

"We want to build those game-winning habits right now," he said.

On Thursday, Canales said, he saw better commitment from Lillard on the defensive spacing.

"[Before] he was just kind of guarding [his man]," Canales said. "I think he did [get to the nail] sometimes, but the consistency, that's part of his growth. Us teaching and him learning. Today I thought he did an excellent job with that."

The message sunk all the way in. Lillard mentioned the instruction without direct prompting when discussing his defense after the game.

"Getting to the nail," he said, of what he's been focusing on defensively. "Being help side, when someone else gets beat, so I can be there to be that guy that helps."

This is not rocket science (or I wouldn't be able to explain it). The bigger takeaway here is that this breakdown is coming from a guy who, in recent months, has just started laughing any time a question he feels uncomfortable answering has been put to him, no matter how politely or innocuously. Can you blame him for that silence? When Kevin Pritchard, Tom Penn, Rich Cho and Nate McMillan all are no longer with the team? No, you can joke about it a lot, considering the public role he's been thrust into, but you can't really blame him.

An open Canales has a hell of a lot to offer and, whether or not the ongoing coaching search finds his full-time replacement, it's great to hear him speak comfortably here. He's earned it and we're all better for it.

Team-wise, we talked about our transition defense, cleaning that up from the last game. We gave up too many easy baskets, and our rebounding. Houston really did a good job of pounding us on the boards and I thought today we accepted the challenge, we went through some film and corrections, and I thought we addressed them tonight as a team.

In terms of Damian, more important to us is him going through his progressions and reads. Seeing all the progressions as he comes out of the pick and rolls and just being in attack mode. I think he was doing a good job in attack mode. This is his third game, he's getting his feet under him and he's understanding that now the scouting is so good in our league, now teams are making adjustments and we have to counter-adjustments back. I thought he did a really good job with that tonight.

Meyers Leonard bounce back after sickness

It's part of their process. The growth and development. I thought he answered the challenge, especially on the boards, I think he ended up with 13 rebounds and 9 points, close to another double-double. He's such a good two-way player for us. He's around the rim, he's a threat at the rim offensively and defensively. He's going to be our rim protector and we're excited about his mentality going forward.

What do you want to see in the last two games?

Carry-over, improvement. We've been teaching all week. We want to keep improving and building. I don't think we've put together 40 minutes as a full game. We've had good halves, quarters, the challenge for us is to put together a full game.

Damian said the number one thing you're harping on him about is fighting over screens on the pick-and-rolls.

That's one of the things we're trying to talk about and correct on the way. During the regular season, that's Russell Westbrook and Steve Nash and we want to build those game-winning habits right now. As well as with Meyers and WIll and all the guys we have here. Implementing defensively what we want to accomplish.

What else are you wanting to see from him improvement-wise?

His defense today, he got to the nail. His weakside defense we talked about it. I think he did a good job of it. Continue to build and correct as we go along. Offensively, just keep him in attack mode. It helps our offense, it helps our team. He ends up with seven or eight assists tonight and we didn't shoot the ball that well. He's going ot continue to learn. Next game, the team will scout us and they'll make adjustments on him. It's like a boxing fight, as rounds go on, we have to be ready for adjustments. That's one thing me and him are really focusing on. We're making sure we're in constant communication in what adjustments we see on the floor.