Batum: To Match Or Not To Match? How Does Portland's Team Salary Factor In?

Share All sharing options for: Batum: To Match Or Not To Match? How Does Portland's Team Salary Factor In?

The Trail Blazer front office must consider many factors as they decide whether or not to match the offer sheet that Nicolas Batum received from Minnesota - productivity, chemistry with teammates, potential for improvement, etc. There has already been excellent discussion on these issues here at Blazer's Edge, and I have no intention of duplicating those interactions.

However, now that the trade of Raymond Felton and Kurt Thomas to the Knicks has been completed, it's possible for us to paint a better financial picture of where the team stands and where they would be going forward if the franchise decides either to match or not to match. After the jump, I'll try to do just that.

First of all, here's my best guess as to where the Trail Blazers stand in terms of their Team Salary. My assumptions are that only the first year of Jeffries' deal is guaranteed and that Shawne Williams' contract is being stretched. Additionally, I am not including Dan Gadzuric as his non-guaranteed contract was reportedly waived today: 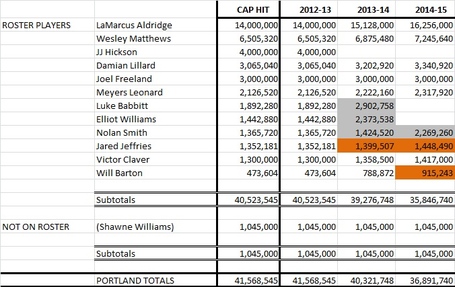 Right now, I calculate that Portland's salary commitments equal just over $41.5 million for 2012-13, meaning that if they were to decide not to match the offer sheet to Nicolas Batum, they could have nearly $16.5 million in cap space. This cap space could be used to sign free agents or to make one or more uneven trades in which Portland could take back significantly more salary than they send out.

Also of note is that if the team decides not to match the offer sheet and then makes no player transactions that adds salary to their 2013-14 figure, they could conceivably carry about the same amount of cap space into next summer (minus the cap hold for their 2013 1st round draft pick, should it not be conveyed to Charlotte) and perhaps even a bit more, depending on where the cap is set for the 2013-14 season..

However, if the team decides to match the offer sheet (and assuming that it is indeed $46.5 million for 4 years with maximum raises each year), their Team Salary would look more like this: 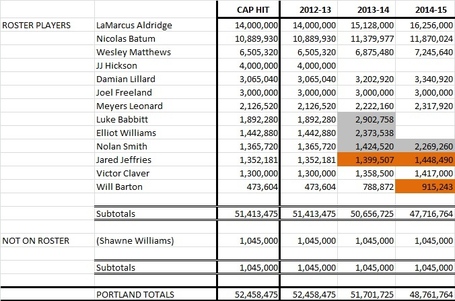 The bottom line here is that the Trail Blazers would have a significantly lower amount of cap space, either for use in 2012-13 or in terms of what they could potentially carry over to use in the 2013-14 season. I estimate that the team would be left with not quite $5.6 million in cap space now, with the potential for a slightly higher amount next summer (again, understanding that if Portland keeps its 2013 1st round pick, that would cut into the amount of potential cap space).

It would seem to me that, from a financial standpoint, the franchise must choose between:

It's one thing to say that Batum is or is not worth a $46.5 million contract offer. However, I believe you have to also make that decision in light of the bigger financial context. Even if you think he's worth that large a contract, it might be better for the team to let him go if that money could be better used in a different transaction. Conversely, you might not think that he's worth that much money, but might still be in favor of the team matching if you believe that the alternatives to matching would be a worse path to take.

So, now having seen the numbers, has your opinion changed as to whether or not the team should match? How can the Trail Blazers best use the financial flexibility that they have today? Sound off in the comments below.