Over the last couple of months, there have been several posts, here at Blazers Edge, designed to paint a picture of Portland's anticipated cap position. I wrote about the subject after the March trade deadline, and more recently, BlazerFanSince1970 provided an excellent analysis of the numbers.

But now that the NBA Lottery has assigned Portland the #6 and #11 picks in next month's draft, we have an even better idea of what the team's cap position will be this summer. After the jump, I'll try to break down the numbers and what options the team will have once the new salary cap season starts on July 1st.

First of all, the numbers. These are based on the following assumptions:

All of that being the case, here is where the team would stand on July 1st: [NOTE: This chart and all others in this post use the same color scheme and basic layout of my salary site, with the first column showing the actual cap hit of each player. Red stands for a free agent cap hold, Yellow stands for a Qualifying Offer amount and Green stands for a cap hold for a 1st round draft pick.] 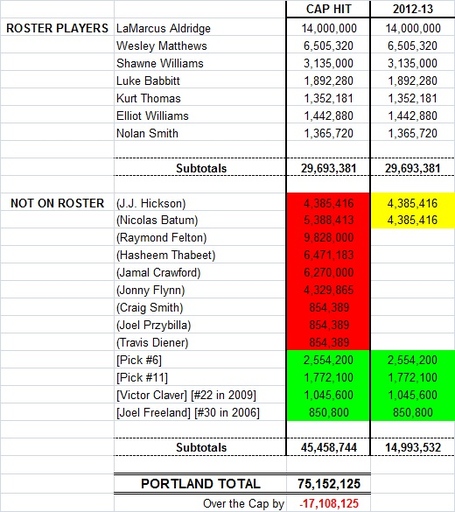 As you can see, including all the free agent cap holds, Portland would be well above the anticipated Salary Cap figure of $58.044 million.

However, it is likely - if not a foregone conclusion - that the team will renounce most of their free agent rights in order to get below the Salary Cap. Once this takes place, the team's cap position will look more like this: 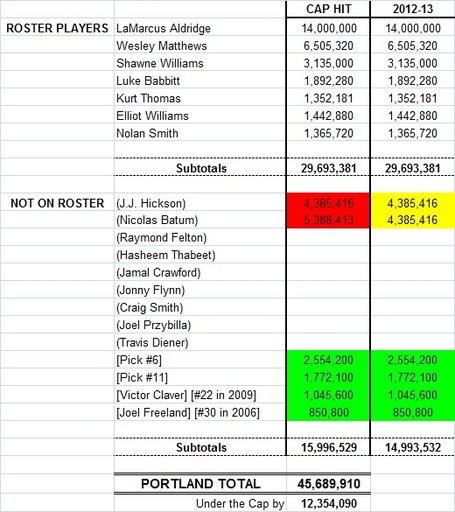 Under this scenario - with the Trail Blazers only keeping rights to free agents Hickson and Batum (and retaining draft rights to all their unsigned 1st round picks), the team would have just more than $12.35 million in cap room. This cap room could then be used to facilitate some combination of the following:

Of course, the team could create even more cap room by renouncing Batum and/or Hickson. Or they could trade the draft rights to one or more of their unsigned 1st round picks for a future pick. This chart is not designed to definitely show exactly what Portland's cap position will be on July 1st as much as give you my 'best guess' with regards to what I see as most probable.

Please remember, too, that Portland is currently above the salary cap, and will remain above the cap through the end of June. Meaning that the team is NOT in a financial position now (nor will they be on Draft Day) to make a trade outside of the 125% + $100,000 rule for teams over the cap. A hugely lopsided trade using cap room could be agreed to during the draft, but it couldn't be enacted until after July 11th.

So, for example, if the team gets a call from Houston offering Kyle Lowry for the #6 pick in the draft, Portland could make that trade but only after July 11th and only after they renounced a number of free agents. Such a trade could not actually occur on/near Draft Day. I say this to remind all of us that even if no trades are announced on Draft Day, it doesn't necessarily mean that Portland will keep all of the players that they take in the draft.

So, if my assumptions are correct and Portland finds itself with $12.35 million in cap room in July, what would you suggest they do with it?