UPDATE: The Blazers will have their own 11th pick, and the Nets' 6th pick in the 2012 NBA Draft. No surprises.

There were no major jumps this year. The top three picks are:

Festivities start at 5pm on ESPN.

Welcome to the 2012 NBA Draft Lottery open thread! Tonight, all non-playoff teams (including our Portland Trail Blazers) get a chance to shape their future in one moment. Let's continue today's ongoing conversation here, what do you expect to happen tonight?

If you're just catching up now, take a minute to look at Dave's Lottery Preview to review all the possible scenarios for the Blazers and Nets tonight. Here's the short version:

There is a 97.1% chance that the Blazers will not reach the top 3. Expectations should be low.

- If we don't see the Nets' name called during #'s 9-6, that means they're top 3. That also means the Blazers don't get their pick. Whether that is good or bad depends on your perspective, but it's clear the Blazers want that pick this year. There is a 25% chance of this happening.

If the Nets name is called from #7-9, that also means a decent team (like Minnesota) has leapfrogged over the Nets into the top 3. This could be bad as well.

Below the jump, Blazersedge reader Lisa (if you're out there, take a bow!) put together a handy chart of all the possible scenarios. 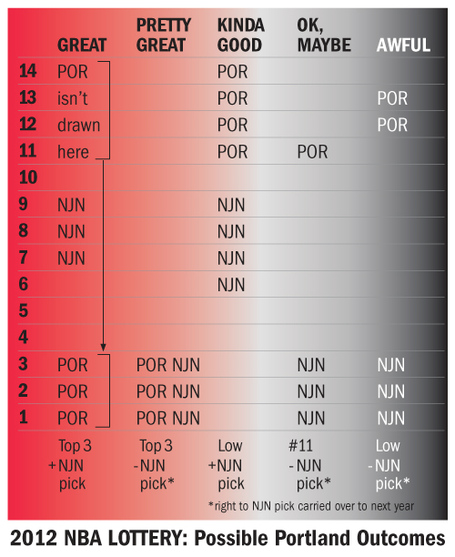