Longtime Blazersedge reader amlmart1 has submitted his own mock draft for 2012, no doubt in response to the plethora of other media folks who are chiming in without having any idea how the actual draft order will fall out. While I'm not necessarily compelled by any of the efforts of my media brethren so far, something about amlmart's intrigued me so I've listed it below the jump and gone into detail on each pick. Hope you find it useful in your own draft preparations. 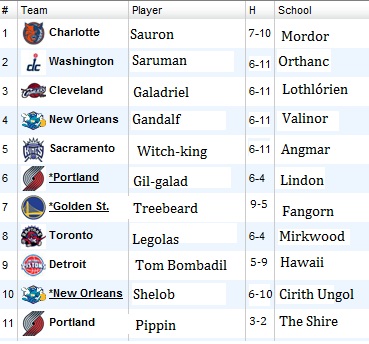 Who else were the Bobcats going to go for here? When you're the worst team in the history of the league you need talent in a big way. This guy has it. When you talk about rings, he practically invented them. Granted they're a long way from thinking about rings at this point, but he might be able to convince free agents to come to his side, by force if necessary. Yes, his character has been called into question but with this kind of ability, they had to go for it.

You know the guy is good when he's already got this many nicknames and he hasn't played a minute in the league yet. He's a natural fit with the Wizards and should lift their talent level immediately. There are long-term concerns about his loyalty as he may want to play for a winner. But at least they've got his rookie contract for the next 3-4 years. The only other concern is that he's the only one of the top five picks without a ring to his credit. Perhaps that'll make him more eager to earn one.

This chick is so good she's known by only one name. She'll be the classic "coach on the floor" for the Cavaliers, though what that will mean for Kyrie Irving remains to be seen. Still, Galadriel has shown some ability to work behind the scenes. She doesn't need the spotlight to be effective, nor is she a "me first" player. Her creativity and ability to anticipate what the opponent will do should make her a force on the floor and raise the IQ of this team. Her only obvious drawback? The tendency to go to the well one too many times.

This guy was speculated about as a potential #1 overall pick so the Hornets got value here. He's a fifth-year senior, one of the oldest draftees in the field. But he's a natural floor general and when he gets on his horse he can outrun anybody up and down the floor. He's been known to disappear for large stretches of games, likely part of the reason he didn't go higher. But he always seems to show up in the crucial moments. He's also 1-0 in championship matches with #1 overall pick Sauron.

Like Saruman, he's a natural fit here. Obviously the Kings coveted Sauron but there's no way the Bobcats were giving up that pick. So they went with the second best guy on the team. He's got great size, he's as good of a floor general as anybody on the list, and people are already predicting he'll not be defeated by any man. If he has a weakness it's arrogance. He tends to trash talk when he should be battling. Pundits also ask why, if his former team had so much talent, they were never able to grab the Big Ring. They were close so many times but always watched it slip away at the last second. He'll need to do better at this level. Rumor has it that he's already best buds with DeMarcus Cousins, so at least that's a fit.

As many scouts suggested, the talent level in this draft fell off severely after the first five picks, leaving the Blazers trying to fish out the best of the rest. Even so, this was a reach. This guy used to be great. He hasn't done anything in years, though. Speculating that he will reclaim his past glory is a serious gamble, especially since he quit on his last team...or more accurately "long ago he rode away, and where he dwelleth none can say, for into darkness fell his star". Rumor has it that Sauron whipped him so badly that he gave up the game, wilting under the final taunt of "Who's your daddy?"

Portland's pick was questionable, but this was just stupid. If you think Andris Biedrins has turned into a stiff, wait until you get a load of Treebeard, a.k.a. Fangorn, a.k.a. God knows what. Yes, he's huge. Yes, those multiple arms could block a ton of shots. But last I checked the rule was three seconds in the lane, not three centuries. If you play Golden State's style why in the WORLD would you select a guy whose motto is, "Let's not be hasty"? Plus they already traded away the store for Andrew Bogut and there's not room for both of them in the key...or on the team bus...or on a plane. Worst of all, as a condition of signing with the team Treebeard is insisting his full name be on the back of his jersey...in Entish. Have fun, P.A. announcers! I know Golden State covets big men right now but this was a mistake. He looks good on paper but his bark is worse than his bite.

Given the players already off the table, this pick made sense for the Raptors. Legolas Greenleaf isn't the biggest or most athletic guy in the field, but boy can he shoot. This makes him a perfect counterpoint for shooting guard DeMar DeRozan, an athletic dynamo who averaged a pitiful 26% from distance last year. Now when DeRozan sits the Raptors can bring in a guy who can hit from anywhere. He should help their anemic field goal percentage.

The New Orleans Hornets, owners of the #10 pick, cursed when Detroit called Bombadil's name at #9. For one thing, he already wears New Orleans colors. Also, though he doesn't look it, he can get around the court with deceptive ease. He'll dazzle you when he gets down among the tall trees. His combination of bulk and agility will make that Pistons backcourt a load to handle when he's paired with Rodney Stuckey. The problem is, Bombadil is something of a 'tweener. He's got point guard height but has been criticized for forgetting plays or simply taking off on his own on the court. This makes him totally unsuitable to run the point. But for a #9 selection he's not bad.

You understand this pick, I suppose. Shelob has great size. She'll certainly eat space in the lane. She has vertical hops and sticky defense too. She's battled chronic weight issues though. Also she's rumored to be locker room poison. 10-to-1 the guy in the mascot suit doesn't make it through the season. But the Hornets had to do something and the risk was probably worth it.

And yes, the Blazers did it AGAIN. For about the 92nd draft in a row the Blazers burned a first-round pick reaching for their prospective Point Guard of the Future. And like all their other attempts, this one is going to end up empty. Look, Pippin is a nice guy, charismatic, great teammate and all. Plus he's got good size for a hobbit, although rumors of performance-enhancing drugs have dogged him ever since he came back from that little forest trip. But let's get serious. The guy was AT BEST the third-best hobbit on his own team, and maybe fourth. I mean, Samwise Gamgee will never be a starter in this league but at least he'll be a solid bench guy, play all the minutes you need him to, and fill in capably any time the guy ahead of him is out. Pippin may be better than Sam in stretches, but his play is nowhere near as solid. He's been known to fumble things down wells, get buried under opponents, and go brain-dead at critical moments. Plus he's already been arrested twice for possession of Longbottom Leaf. If they were going to deal with that kind of headache at least the Blazers could have gone with Merry, who snuck up on the Witch King and gave him a run for his money. Maybe they could have picked up Eowyn in the second round and made sure they stayed ahead of Sacramento at least. But no...they go with the longshot. I know the Portland faithful will kill me for this, call me pessimistic and all that, but seriously...with Aragorn son of Arathorn, Theoden, Elrond, Faramir, and 8 freakin' Ringwraiths still available this was a gamble the Blazers should not have taken. It will not end well.