To put it mildly, it's been an interesting ride this year. It seems like so long ago there was the work stoppage, of course, and we became glued to every meeting between David Stern and Billy Hunter. When training camp finally arrived, Portland was dealt a crippling blow on training camp eve, when Brandon Roy -- The Closer, the face of the franchise -- shocked everyone and retired. Gone were his late-game heroics and his leadership and there was very little time to alter all of the plans that had been made.

LaMarcus Aldridge, to his credit, did the only thing he could do: he put the team on his back and he made the All-Star team for the first time. What a season for L.A. An old friend [Joel Przybilla] turned down offers from Miami and Chicago and returned to Portland. His presence would provide a huge lift but things would quickly start to unravel.

March 15, the team decided to make some major moves. Two trades and a coaching change. Nate McMillan was relieved of his duties, a necessary change but it was difficult to see Nate go. He was classy to the very end, of course. Almost buried in the news that day was the official end of the Greg Oden Era in Portland. So two of the Big 3 saw their Blazers days end this year.

After the change, the team handed the reins to a former unpaid intern. Kaleb Canales, who had worked his way up through the ranks and would now be the youngest head coach in the league. What a start it was, as in his first game, Canales led the Blazers to an upset of the mighty Bulls in Chicago. He simply asked his Blazers to compete every night. One of the bright spots in this final stretch has been J.J. Hickson, who was tossed aside by Sacramento but quickly found himself the focal point of Portland's offense, and now he says he doesn't want to leave.

There were still some dramatic moments and big time wins but the many obstacles this year proved too big to overcome. What now awaits is a summer of change and major opportunity. The potential of two lottery picks and with money to spend in the market, this could easily be a reload and not a rebuild. With pillars to build around, an owner committed to winning and the best fanbase in the NBA, it's easy to see why hopes are high for next season, even as we close this one.

Thank you Rip City for continuing to believe. We'll be back, we'll be better, and it will all be here again before you know it.

Here's a visual. Click here on on the picture to enlarge. 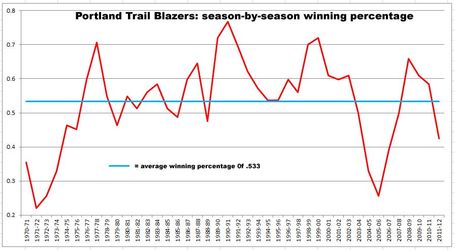