The Milwaukee Bucks defeated the Portland Trail Blazers, 116-87, at the Rose Garden on Tuesday night, dropping Portland's record to 21-25.

That was the best loss of the season for the Blazers.

It was so good I even made a chart to help explain how good it was. We'll get to that in a bit.

Look, Portland got [bleeping] clocked. I'm not going to waste your time putting it any other way. Milwaukee won all four quarters, generating an absurd number of easy baskets and getting into their offense at will. 35 assists on 48 field goals. They didn't need to bother with offensive rebounds because they didn't miss many shots. They won the turnover differential handily despite starting Brandon Jennings and Monta Ellis.

"Too many crooked numbers up here in the stat sheet," Interim coach Kaleb Canales said, referring to the fact that the number "5" started Milwaukee's field goal (58) and 3-point (52) percentages. "We didn't do a good job defensively tonight. You have to give them credit. They're a hot team. They played like they've been playing and we didn't take them out of their game."

"We have to play with more effort," All-Star forward LaMarcus Aldridge said. "We got backdoored four or five times. We've got to fight through screens. Our bigs have to be up on screens. Tonight, our defense wasn't there in the second through fourth [quarters]."

"Our biggest thing tonight is that we didn't play on defense," center Joel Przybilla echoed. "All defense is is a little effort. Effort and concentration."

The defense was bad. So was the offense. Portland's bench was the major culprit there, shooting 0-20 and combining for just one point through three quarters. Despite extensive garbage time, Milwaukee won the bench scoring battle, 45-9.

"We [as the bench] have to do more, no question about it," Blazers reserve guard Jamal Crawford said. "We have to either maintain it or make it grow. We have to get back on track... Our bench could have been better, our effort was missing."

Canales and Aldridge did their best to take the pressure off the new-look bench unit, which now gives regular minutes to Craig Smith, Luke Babbitt and Nolan Smith, all of whom were used sparingly by Nate McMillan.

"We believe in each one of our guys," Canales said. "It's not only the bench tonight. We have to play together as a team. We just didn't get it done tonight."

Craig Smith is a known, limited and relatively enjoyable quantity. The early returns on Babbitt and Nolan Smith are mixed, at best. Struggles are ahead, the only question is the degree.

Meanwhile, starting point guard Raymond Felton was at it again, committing six turnovers and getting booed loudly at the Rose Garden. After the game, he issued a plea to Blazers fans booing the team.

"Just stick with us," Felton said. "The boos is about -- they just want us to win, to succeed. It's not about the boos being a bad thing... They have every right to boo. We got our behinds handed to us in our building. That's not acceptable. I can see why they are upset. I'm upset. Know what I'm saying? To the fans, just stick with us. We're fighting. It's been a crazy season. 66 games in a tight time. Just don't give up on us."

OK, good thought. Wrong message, though. The right message is not one he or anyone in the organization can realistically deliver. Which is why it's time for a rare, extended but completely necessary digression.

Results -- wins and losses -- are the most important thing in the NBA. Without wins, tickets don't sell, coaches get fired, executives get let go, some players get traded, other players get pouty, team-first attitudes give way to me-first attitudes, media members get cranky and fans starting booing their team at home.

I overheard a number of conversations in the Rose Garden concourse on Tuesday night and there was significant frustration with the quality of play. There was -- as mentioned -- extended booing. It makes sense. Season ticket holders paid for one product and are now watching another. That realization process is going to take awhile and will happen at various speeds for different people. Some people will surely vote by not showing up. Others will voice their frustrations. Totally understandable.

Ultimately, the negativity will get you nowhere. Pro-tip: embrace the struggles now (many already have and if you're in this group, congratulations). If you're still raging or on the fence, this one is for you.

Key point: The result of Tuesday night's game has never aligned more closely with proper expectations for the Blazers at any point this season. This was a standing ovation worthy performance from everyone from Paul Allen to Larry Miller to Chad Buchanan to Kaleb Canales to LaMarcus Aldridge to Raymond Felton to whoever the guys are on the bench these days. The Blazers should have been expected to lose, they will benefit by losing and they left no doubt: They lost thoroughly. Mission fully, albeit abysmally, accomplished.

This sucker had to be blown up. There was no other alternative. This team -- as constructed -- was going absolutely nowhere. Somehow Allen came to this realization and/or Buchanan and Miller managed to get that message through to him. How? Why? No idea. But it happened. The only result that matters: the Blazers got what is universally regarded as an excellent pick in exchange for Wallace. The rest of the last week has obviously been window dressing.

Now what do I mean about aligning expectations and results? Well, in the NBA you have four basic situations. Let's use a visual demonstration. 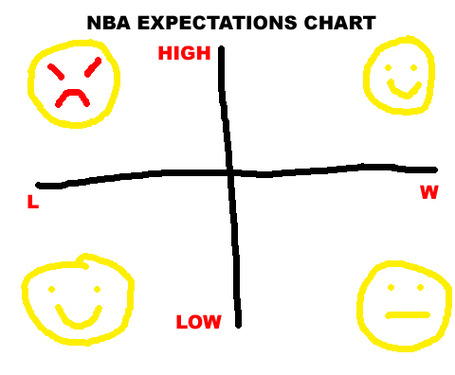 Second, the upper left hand corner. You deliver losses while dealing with high expectations. This is the worst case scenario! This is what the Blazers were doing from January through early March. There's disappointment, frustration, confusion, regret, blood. Lots of bad things. No matter what, you want to avoid this option. The Blazers made drastic changes to avoid being in that corner.

Third, there's the lower right hand corner. You deliver wins while dealing with low expectations. This might sound good at first! You might talk yourself into it! It's fool's gold. If your roster does not have the pieces necessary to create big expectations, overachieving to reach mediocrity is self-defeating in the NBA. It will end in emptiness and cyclical frustration. This is where the Blazers could potentially be.

Finally, there's the lower left hand corner. You deliver losses while dealing with low expectations. This sounds horrible but, as the smiley face indicates, it's actually a really good thing. The NBA rewards its worst teams with the Draft lottery system. There is an incentive to lose if you're not good enough to create high expectations. You want to lose without losing face, of course, but the concept of losing is not the same as it was when there were big expectations. This is where the Blazers and their fans should want the team to be.

Life changed for the Blazers on March 15. Any lingering expectations flew out the door with Gerald Wallace and Marcus Camby. Portland's rotation was not deep with Wallace and Camby. Guess what it looks like without them? Even less deep. Imagine that.

To put this bluntly: If you're going to suck you need to suck like Amazon Ashley Adair a Hoover vacuum, not like a McDonald's straw. Big Daddy Kane once said that there ain't no half-stepping. Surely he was discussing tanking in the NBA. Jump in the deep end of the pool and freeze your [bleep] off. Leave the whole "test the water with your foot, ease in the ankle, shiver when the water hits your thigh" thing is for the short-sighted. You're going the same place and you might as well be in the left lane to get there.

Buchanan's actions make it clear that he gets this reality, even if the words in the press conferences have expressed the "We're still trying to win" sentiment. He sold off players without hesitation. His biggest apparent regret? That he wasn't able to sell off more players. Good!

Canales' actions make it clear that he gets this reality too, even if his words have expressed the "We're still trying to win" sentiment. He's playing a 10-player rotation when he has maybe 7 legit NBA players available to him. He's doing it knowingly and repeatedly. Good!

Why boo that? Every time Craig Smith accidentally nutmegs a player while inexplicably running a fast break, every time Wesley Matthews blows a lay-up in transition, every time Raymond Felton dishes out turnovers like a Lazy Susan, every time 7-foot-3 Hasheem Thabeet gets rim-checked, every time Luke Babbitt involuntarily trembles in fear while shooting a jumper: Cheer. You don't have to do it out loud. But at least do it inside.

When expectations were high, these on-court behaviors were grating. But expectations are now non-existent. The franchise has an Acting General Manager, an Interim Head Coach and a High School Seniors In Spring roster. Failing is the new goal. Applaud the failure. Encourage the failure. Lighten up and enjoy the funny moments that are sure to develop over the next month.

The good man who was going to lose his job if the failure continued has now been sacked. That bridge has been crossed. Any success that is produced during the rest of this season will only serve to flatten out the smiley face as you move from the bottom left corner to the bottom right corner of the chart. That's bad. It might be tempting. But it's bad. Stay in the lower left corner.

There are five weeks and one day until the end of the regular season. Close your eyes and be that yellow face in the lower left hand corner for those 36 days. After that, who knows where the expectations will wind up.

If all goes well, it shouldn't be anything but Taco Bell jokes, enjoying rare flashes of youthful potential and DraftExpress.com research from here on out. Life could be worse. 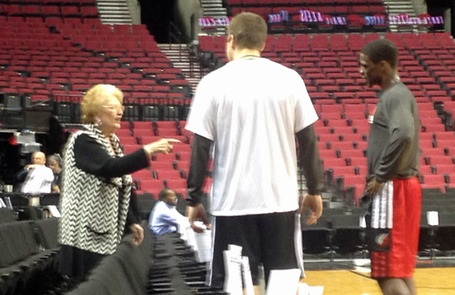 [A 40 oz. bottle of Olde English gets tipped to the sidewalk, liquid draining slowly. The bottle clanks to rest on the cement and rolls down the road into a drainage pipe.]

Too many crooked numbers up here in the stat sheet. We didn't do a good job defensively tonight. You have to give them credit. They're a hot team. They played like they've been playing and we didn't take them out of their game.

Was your bench disrupted?

I felt they pressured us and we struggle with that early. After we made in-game adjustments, they did a good job defensively. Not only against the second unit but against the first.

Couldn't take them out of their game?

I think it's a combination of things. There's too many -- 57 percent from the field, 52 from the three, 35 assists. You have to give them credit, they're playing good basketball. They came in tonight and did the same thing they've been doing to a lot of teams.

Did the result catch you by surprise?

Our commitment has been to competing and to playing together. I felt we competed for the majority of 48 minutes tonight and we're going to stick together and we're focusing on practice tomorrow.

Talent gap on the bench?

We believe in each one of our guys. It's not only the bench tonight. We have to play together as a team. We just didn't get it done tonight.