If you're anything like me, this Blazer season has you thoroughly confused. There are times when Portland plays a beautiful brand of basketball that is exciting to behold. But there are also times where the team appears flat-footed and somnambulant. While previous seasons have had their fair share of ups and downs, this season may just outdo them all. How else to explain a team with the 6th highest SRS and 5th highest Pythagorean W/L ratio sitting at 18-18?

I decided to see if I could identify any trends that are developing that might explain Portland's recent downward spiral to .500. I have examined basketball-reference's 4 factor stats from this season to tease out such trends that may dispel some myths and illuminate areas that may be addressed.

I'll present a series of graphs that have the same structure:

Game data is presented in solid dots connected with a black line. Red dots signify wins while black dots signify losses.
The league average for the given statistic is plotted in a gray dashed line.
To reduce the noise in the game data, I've applied a weighted moving average incorporating 5 games on either side of the each game and plotted this in blue.

The first statistic I looked at was pace. There was much ado at the beginning of the season about Portland pushing the tempo and letting Felton run loose with the young guns to get easy buckets. The data does indicate that the Blazers indeed played at a faster pace than the league average to start the season, but as the season has progressed, Portland's pace has fallen off to the point where they have played below the league average for about 10 games now. 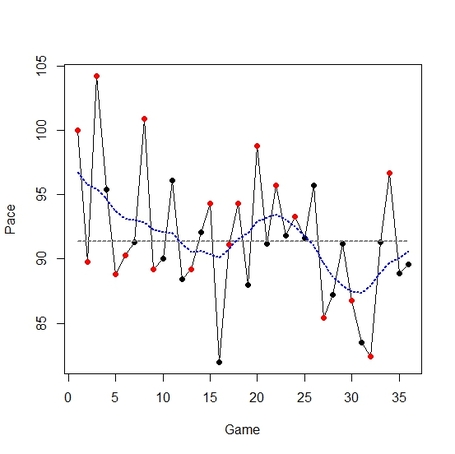 Related to this are turnover rates. As you may expect, Portland's forced turnover rate has more or less plummeted along with the pace. 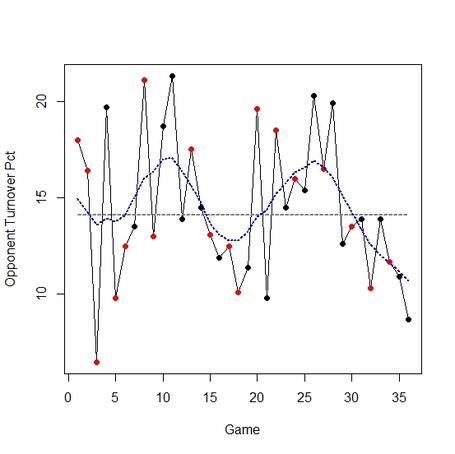 However, the Blazer turnover rate has held fairly constant despite the change in pace. Portland has consistently taken care of the ball slightly better than average throughout the course of the season. And no, I did not remove any Felton or Crawford turnovers - as bad as they may have performed, turnover numbers do not appear to be hurting (or helping) the Blazer cause. 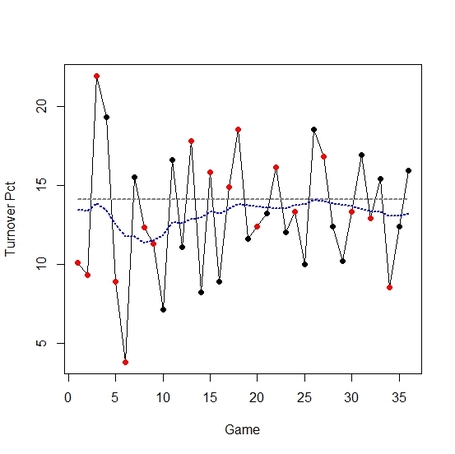 Another proclaimed weakness of the Blazers is shooting. Andre Miller was cast aside in favor of Raymond Felton in part due to Felton's perceived shooting advantage providing better spacing. Wesley Matthews and Jamal Crawford have struggled overall as well, and it seems that only Nicolas Batum is a consistent threat from deep. Let's see what the graph says about Portland's effective field goal percentage: 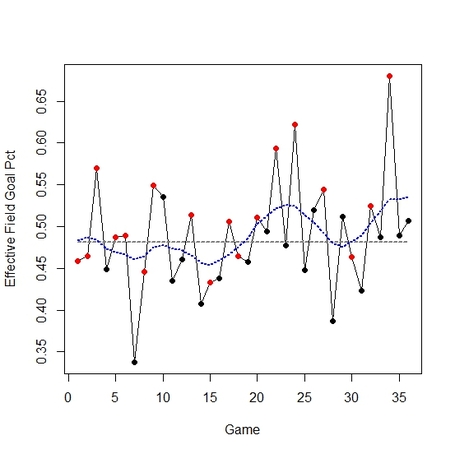 Contrary to popular belief, Portland's shooting has not been significantly worse than league average at any point in the season. Not only that, it appears to be slowly improving despite the dwindling winning percentage! What about opponents' shooting? Nate McMillan is renowned by some in the media as a defensive wizard and a clueless switch-happy numbskull by many here. Which side will the graph find more valid? 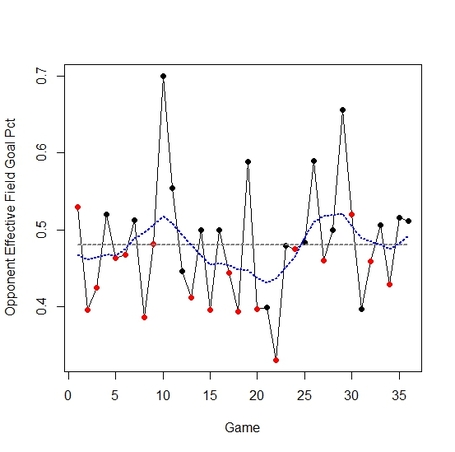 Neither, I suppose. Portland's opponents have fluctuated around league average throughout the season.

Well, if shooting is not a major problem, what has caused Portland's slide over recent months? I think one answer is rebounding. On the offensive side, Portland once again comes out right around league average for most of the season. Perhaps a slight downward trend is evident, but it is hard to say definitively: 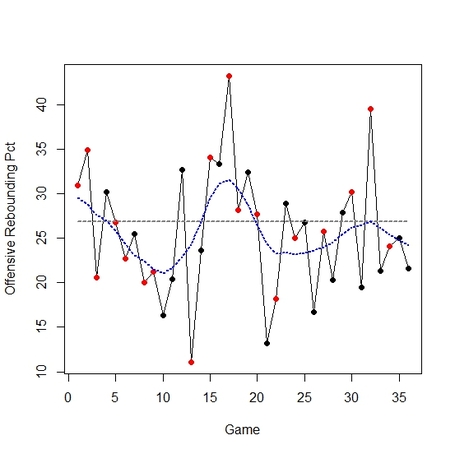 The real problem in my eyes lies in the defensive boards. As with the Denver game and last night against Miami, Portland has allowed undersized and undermanned teams free reign on the glass, and this is really hurting their prospects in my view. 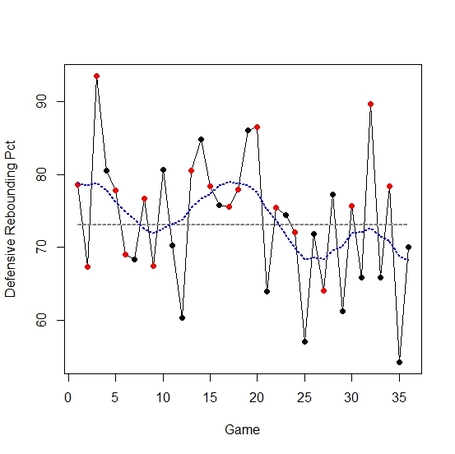 They started the season strong protecting the defensive boards but have gradually become a poor defensive rebounding team. Whether this is due to lack of effort or the age/conditioning of many of Portland's bigs is up for debate, but the graph tells a pretty damning tale. 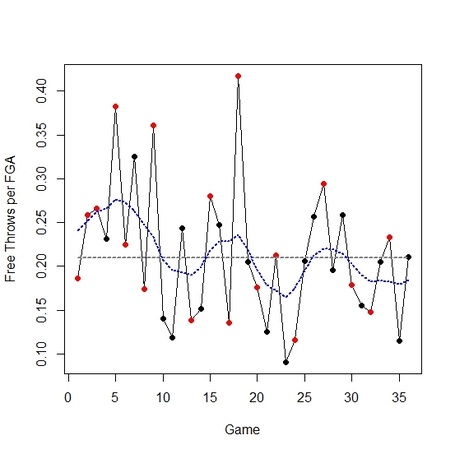 Simply put, Portland is not getting to the line, which is a real area of concern, because Portland's 78.6% conversion rate from the stripe ranks 4th in the league and suggests both that this graph would look even worse if they were an average free throw shooting team and that the Blazers are not taking advantage of one of the few areas where they rank among the elite. The flip side of this coin reveals a fairly constant league average rate for Portland's opponents: 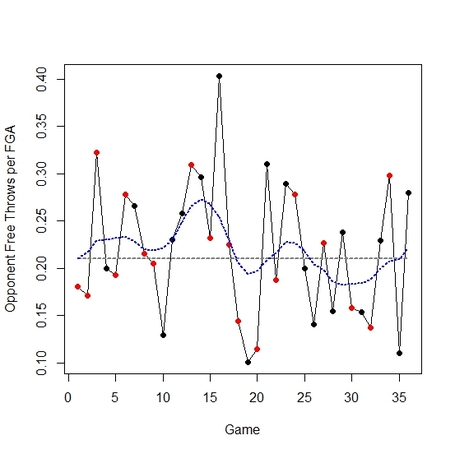 When you add up the pieces, Portland's offensive rating has been pretty consistent throughout the season despite the change in pace, with improved shooting offsetting fewer trips to the free throw line: 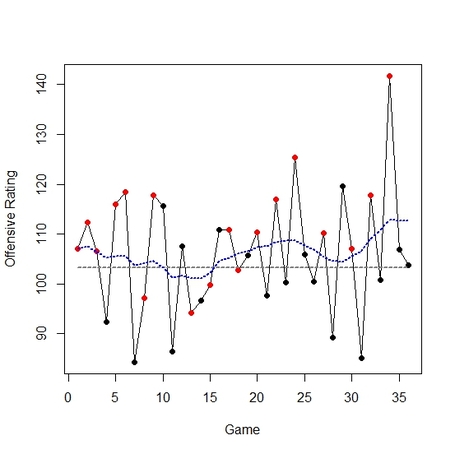 The picture isn't so rosy when we look at defensive rating, as a rising trend (which is bad for this statistic) is suggested, due mostly to poor defensive rebounding and perhaps Portland not nabbing as many turnovers. 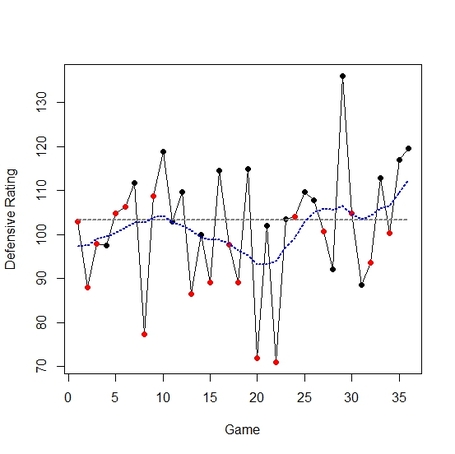 While the guards have taken their fair share of blame for turnovers and shooting, these graphs suggest that Portland is not performing at a rate below the league average. That is not to say that these aren't areas of concern - I shudder at the thought of how Portland would have fared recently without improved shooting! In my opinion, a general malaise has caught on throughout the team and it shows up here mostly in the form of rebounding and getting to the free throw line.

If you've made it through this post, thank you for reading! I hope this has been insightful!