Of all the questions that I've been asked over the past four days, none has been asked more than this one: Do the Trail Blazers look to have more cap room as a result of the personnel moves they made last Thursday? Did trading Gerald Wallace provide the franchise with greater cap flexibility? Did the trade of Marcus Camby give Portland more money to spend in free agency this summer? My answer is a very definitive "maybe". A strong and powerful "it depends". An unshakable "perhaps". I'll try to walk you through it after the jump...

Since the flury of activity by the Trail Blazers last Thursday, Blazersedge has been a cornucopia of great posts, ranging from Dave's evaluations of the Gerald Wallace deal, the Marcus Camby deal and the release of Greg Oden to posts by BlazerFanSince1970 and Comments (how's that for a user name that's sure to be mentioned in every post?) about the financial implications. It's not my intention to duplicate what's already been discussed in those threads, but I'm afraid some crossover will occur due to the nature of this question about potential cap space.

It's an important question to ask. Has all of the maneuvering by the franchise over the last few days really resulted in more cap room this summer? Well, in order to answer that question, we have to be able to identify the following:

So I'll try my best to answer them in that order.

WHAT WILL THE SALARY CAP BE NEXT SEASON?

In order to make an educated guess as to how much cap room the time might/will have in July, we have to be able to make an educated guess as to what the salary cap will be set at. Of course, we won't know for certain what the number will be until it's officially announced at the end of the July Moratorium, but given the state of the league and the new rules of the Collective Bargaining Agreement, I think I can make a pretty good guess.

Yep, even accounting for a very healthy increase in BRI over two years, this estimate would put next season's salary cap at about $0.4 million less than this year's $58.044 million. However, the new CBA does guarantee that the 2012-13 Salary Cap will be no less than $58.044 million, so we know that it won't go down. However, I think I can say with great certainty that it won't be higher, either. After all, the numbers I used above don't even account for a lockout-shortened 2011-12 season which will certainly impact the final BRI numbers negatively. Does anyone really believe that in a 66 game season, league revenue is going to jump more than the 4.78% that it did last year? And yet, even the very liberal use of that 4.78% figure does not translate into a new Salary Cap larger than $58.044 million.

It is for this reason that I feel very good in guessing that next year's Salary Cap will be $58.044 million.

WHAT WAS THE TEAM'S PROJECTED CAP POSITION BEFORE THURSDAY?

Before all the trades and waivers of the last few days, here's where the Trail Blazers looked to stand come July 1st: 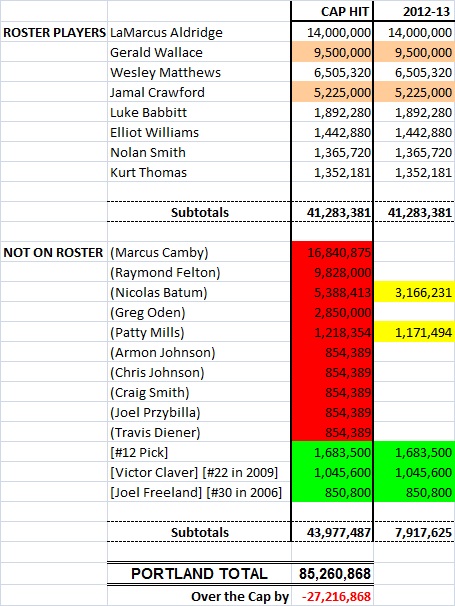 The above chart uses the same color scheme (and basic layout) of my salary site with the first column showing the actual cap hit of each player. Peach stands for a Player Option, Red stands for a free agent cap hold, Yellow stands for a Qualifying Offer amount and Green stands for a cap hold for a 1st round draft pick.

[Note: for purposes of this projection, I'm assuming that Portland's 1st round pick in 2012 is #12. If it's actually higher or lower than that, of course these numbers will have to be adjusted accordingly]

However, we can take this projection and adjust it to make a more "probable" cap position. If we assume the following:

we arrive at the following projection of Portland's cap position: 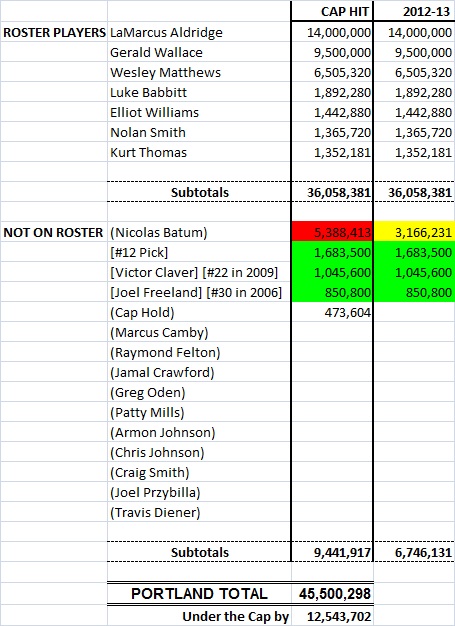 This combination of moves would have left Portland with just over $12.5 million in cap space (after accounting for a minimum cap hold of $473,604 for having fewer than 12 players on the books).

The one wildcard in this projection is Gerald Wallace, though. What if he decided not to pick up his Player Option for 2012-13 and the team renounced his free agent rights? Then the projection would have looked like this: 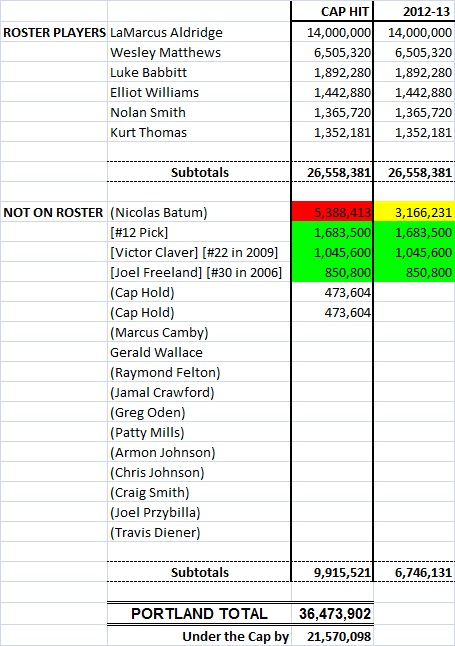 In this scenario, Portland would have had just over $21.5 million in cap space.

But you'll notice I've used the phrases "would have" and "could have" in this section. This is where the franchise was. The next step is to analyze where Portland stands now, in order to be able to compare the two. Then we can finally get around to answering the original question. (I'll bet you never thought it was going to be this complex when you first started reading, did you?)

WHAT IS THE TEAM'S PROJECTED CAP POSITION NOW?

So, now that we've seen the Trail Blazers trade two of their players and waive others, here's a full picture of where the team looks to stand in July: 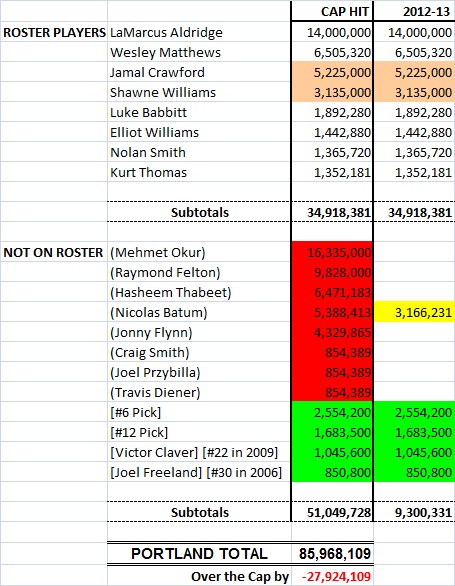 [Note: Again, having to make a choice, I'm assuming that the pick received from New Jersey gets conveyed this summer and ends up being #6. And, again, if it ends up being higher or lower than that - or if the Nets get to keep the pick - then the numbers of this projection will change accordingly]

However, as with the previous projection, several assumptions can be made to create a more "optimal" and perhaps more "probable" picture, including the following:

In this scenario, Portland's cap position would look like this: 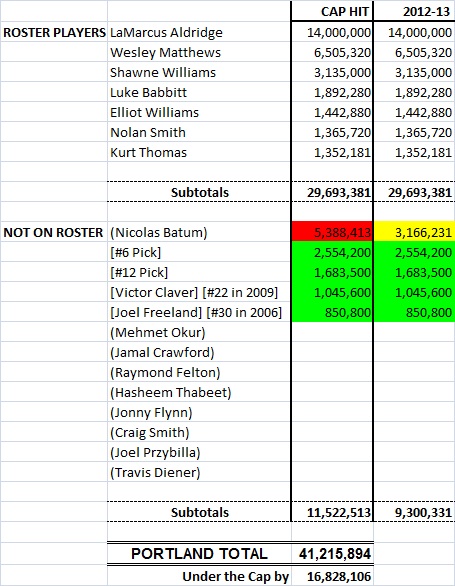 Which would leave the Trail Blazers with about $16.8 million in cap room.

Of course, this number could be changed by any number of factors:

All of this leads me to the following

2) Interim GM Chad Buchanan's statement during Thursday's press conference that the team could have "anywhere from $15 to $20 million in cap room" seems to be a valid one.

3) The trade of Marcus Camby will probably only have a significant impact on this summer's cap position if the Trail Blazers decide to retain Flynn and/or Thabeet. Otherwise, it was trading one expiring contract for two expiring contracts and a 2nd round pick (which might or might not count against this year's cap).

Which, as I mentioned earlier, allows me to answer the question of whether Thursday's transactions brought Portland more cap room only with this response:

I wish I could answer the question more definitively, but I hope you now understand why I have to answer it the way that I do.

Feel free to offer your own conclusions and/or analysis in the comments below.