Aldridge, 26 and in his sixth season with the Blazers, now has 7,200 career points. He is currently No. 5 in the NBA in scoring this season, averaging 23.3 points per game. His future as a scorer is clearly bright. But how bright? Let's explore that question by comparing him to the Blazers that have preceded him.

Portland's franchise scoring record is held by Naismith Hall of Fame guard Clyde Drexler, with 18,040 points. Drexler made a mockery of the competition, holding a 6,710 point lead (more than four seasons worth of quality scoring) over the nearest competition, his former backcourt mate Terry Porter. 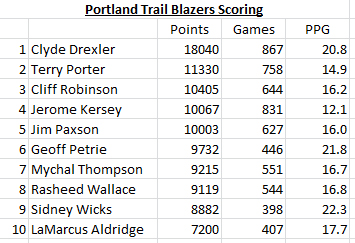 Drexler's total incorporates virtually every helpful circumstance that could go into compiling a lofty franchise scoring record. He entered the NBA early (after three years at the University of Houston), he was drafted by the team that he spent the majority of his years with (he spent the first 11.5 years of a 15-year career in Portland), he got minutes and shots early in his career (he appeared in every game as a rookie and was taking more than 14 shots per game by his second season), he hit elite scoring levels in his prime (he averaged more than 27 points per game twice and 25 points per game once), he displayed very good durability for his first eight seasons (he never missed 10 games in a season until he was 30) and he was deemed by his team as untradeable throughout his big-number years (the late-career trade to the Houston Rockets eventually made at his request).

To recap: the simplest formula for a franchise scoring record: Score early, score big, score for an extended period time and score while avoiding injuries and staying in the organization's good graces.

What happens when you hit every single criteria in that formula? Well, this chart happens. It's Drexler... and everyone else. Click the image to enlarge. 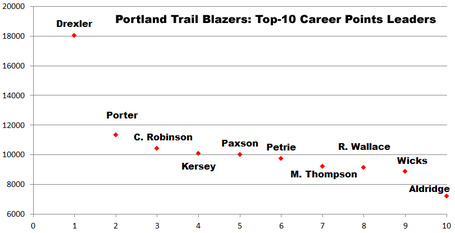 To this point, there have really been only two challengers to the throne in the post-Drexler era: All-Star forward Rasheed Wallace and All-Star guard Brandon Roy.

Wallace was not drafted by the Blazers, but he entered the NBA after two seasons in college and was on Portland's roster by his second season, meaning that he began his chase on roughly equal footing with Drexler. While Wallace's single-season point totals approached Drexler's on a few occasions, he never topped Drexler in points at the same age. His bid was going to be based on consistency and out-of-this-world longevity if it was going to pan out.

Of course with Wallace there was a laundry list of extenuating circumstances and off-court considerations that muddied the water. No need to rehash (zing) all of that here. Suffice it to say, Wallace's bid to unseat Drexler came to a swift end with the 2004 trade to the Atlanta Hawks (and then Detroit Pistons). Still, his consistency over 7+ years landed him at No. 8 on the Blazers' all-time list, nothing to be ashamed of.

Here's Drexler vs. Wallace season-by-season point totals as Blazers (Drexler in black, Wallace in red). Click on the image to enlarge.

Sidenote: It's probably worth mentioning that off-court circumstances also cut short forward Zach Randolph's bid in a similar manner after just six seasons in Portland. Dozens of missed games due to injury early in his career probably killed his bid before it ever really got off the ground though.

Roy looked to be a more serious challenger, even though he spent four years at the University of Washington. He made three All-Star games in his first four seasons and averaged 22.6 points per game by the age of 24. Roy's bid was almost the anti-Wallace. Whereas Wallace was undone by a failure to score at elite levels and keep his ish together, Roy was a high-volume scorer and model citizen. His age-23 scoring actually topped Drexler's and he was close again at 24.

That injuries limited Roy's total scoring output in a Rookie of the Year campaign was a signal of things to come, and a fast decline in production and an abrupt amnesty clause cut short his career before it blossomed. Drexler famously said that he wanted to see Roy produce for an extended period of time before placing him among the all-time greats, and the injuries kept Roy from attaining even top-10 franchise scorer status. He now sits on 6,107 career points.

Here's Drexler vs. Roy season-by-season point totals (Drexler in black, Roy in red). Click on the image to enlarge.

Wallace, Randolph and Roy wind up serving as great background for Aldridge, who is now far and away the best contender to steal Drexler's crown that the franchise has seen. Even this year, his best per-game scoring campaign, Aldridge is not the truly top-shelf scorer that Drexler was, but he has avoided the off-court issues of Wallace and Randolph and also avoided the injuries that stunted Randolph and Roy. Given his consistency and growing scoring volume, those factors could very well combine to send Aldridge past Drexler when all is said and done.

Like Wallace, Aldridge has stayed on the court, and he has already surpassed Wallace as a per-game scorer as a member of the Blazers.

Like Roy, Aldridge has fashioned an uber-responsible, franchise player reputation that should endear him to the city and franchise for as long as he desires and can physically perform.

Indeed, if we go back to the formula for franchise scoring success put forth earlier, Aldridge, like Drexler, is hitting every criteria on the list. He entered the NBA early (after two seasons at Texas), he began his Portland career as a rookie (a 2006 Draft Day trade meant no head start for Drexler), he ramped up quickly (getting 15 shots per game by his second season), he has hit big scoring numbers as he has entered his prime (21.8 points per game last season and 23.3 so far this season), he has displayed excellent durability (Aldridge has missed just six regular season games in the last four seasons) and he is currently as untradeable as virtually any player in the league, with no off-court missteps to speak of. Aldridge is also locked into a contract extension that should keep him in Portland through 2014-2015, his age-29 year, ensuring another 3-plus seasons of scoring production to add to his current tally.

Aldridge projects to be No. 2 on Portland's all-time charts by the end of his current contract, barring a significant injury. In one somewhat conservative scenario that allows for games missed due to injury, Aldridge would pass Wicks, Wallace and Thompson in 2012-2013, Petrie, Paxson, Kersey and Robinson in 2013-2014 and catch Porter early in 2014-2015. If Aldridge maintains a 22 points per game average and misses less than 14 combined games over the balance of this season and the next two seasons, he could actually reach the No. 2 spot by the end of 2013-2014 season.

Here's Drexler vs. Aldridge season-by-season point totals (Drexler in black, Aldridge in red). Click on the image to enlarge.

Note that Aldridge's lighter red bar is an extrapolation of Aldridge's current scoring over the rest of the season (23.3 points per game times 66 games).

Visually, you get a real feel for how special Aldridge's scoring has been. Remember, Drexler is the franchise's gold standard and a Hall of Famer. Aldridge came close to topping Drexler at 22, topped Drexler at 23 and has a solid chance to top him again over the next two seasons, once the NBA is back to playing 82 games. It's not fair to characterize Aldridge as being neck-and-neck with Drexler but there's no question even with Drexler's three massive scoring seasons (ages 25, 26 and 29) that he has produced enough in his first six seasons to indicate that this chase will likely be determined by circumstances (health, contract situation) rather than ability.

Baseball statistics pioneer Bill James has a career projection tool which allows you to plug in a player's age, current total and recent season totals to calculate the odds that the player will pass a certain mark.

Of course, this is just a projection, and it is projecting total career points, not necessarily points with the Blazers. Nobody can know whether Aldridge will be able to remain healthy and happy with the Blazers (and the Blazers happy with him). Eight or nine years is an eternity in the NBA; Hell, fortunes have changed dramatically in eight or nine months for this franchise more than once since 2007. But given how this is playing out to date, it's possible that just one contract negotiation stands between Aldridge and the franchise's scoring record. That's big in the modern NBA.

To sum this up in one sentence: Franchise scoring leader is a compiler's record, and Aldridge has so far shown all the necessary tools -- and none of the obvious red flags -- to get it done.

Of course, he's still not yet at the halfway mark.

Update: An excellent follow-up FanPost from BlazersMakr offers an advanced statistics comparison between Aldridge and Drexler.