One writer takes Portland Trail Blazers forward LaMarcus Aldridge to task for his heavy emphasis on perimeter shooting this season.

Joe Kaiser of ESPN.com (Insider) is on board with Aldridge getting back into the paint.

That's especially true considering the lack of other frontcourt options on the Blazers, who are relying on young journeyman J.J. Hickson and rookie Meyers Leonard to man the center position.

As recently as two seasons ago, Aldridge attempted 10 shots a game inside of 10 feet and, not surprisingly, he notched a career-best 21.8 points a game that season. But that number fell to 7.7 shots inside of 10 feet last season, and it continues to fall (5.4) in the early going this year.

How big of a problem is it? Consider this for a moment: in none of Aldridge's first six NBA seasons has he taken, on average, more than 6.4 shots a game outside of 15 feet away from the basket. This year, 11.6 shots a game are coming from 16 feet and out, hurting his shooting percentage (43.6) and preventing him from getting to the free throw line (3.0 attempts a game), where he's a career 77.8 percent shooter. The guy is transforming from a post presence with range to a glorified wing shooter right in front of our eyes. That could be a bad thing for the Blazers.

I was looking at Aldridge's distribution a little bit on Sunday. His 11.2 long twos per game (through five games, not six) were far and away leading the NBA; Boston Celtics forward Kevin Garnett is second at just 7.0 per game and only one other player, Chicago Bulls guard Rip Hamilton, was above 5.5 per game, per HoopData.com here. Aside from two guys, Aldridge is taking more than double the number of long twos, the least efficient shots in basketball, than everyone else in the league so far.

Also, check out this chart that really make it easy to see what a shift in shot distribution Aldridge is undergoing this season. Remember, Aldridge's shot attempts have ramped up considerably as he's evolved into a No. 1 scoring option over the last few years. What didn't change, at least not much, under former coach Nate McMillan was the ratio of shots that he took from the perimeter. Throughout his first six seasons, Aldridge's 16+ foot jumpers made up between 29 percent and 40 percent of his total attempts, right on 36 or 37 percent in three of his six years. Remember, that covers a range of scenarios: when he was taking seven shots as a rookie, 15 shots as a second option behind Brandon Roy and 17 shots as a No. 1 option the last two seasons.

Under new coach Terry Stotts, though, 59 percent of Aldridge's 19+ attempts per game are coming from the perimeter. Yes, he's shooting more overall. But he's also launching at a much greater rate from outside. In simple terms: Aldridge is now taking three out of every five shots instead of his career-standard two out of every five from the outside. Right now, the Blazers are No. 10 in the NBA in offensive efficiency, so this hasn't been crippling. It will add up if it continues, though, because he is currently No. 1 in the NBA in field goal attempts and not getting to the free throw line nearly as often, as mentioned above. A drag on efficiency will result. 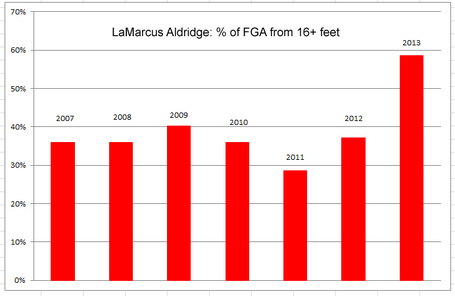 There are reasons for this. Aldridge is being used on the perimeter a ton as rookie point guard Damian Lillard gets acclimated to the NBA in his preferred method, playing lots of high pick-and-roll. Also, Stotts prefers to move Aldridge around to avoid an over-reliance on ball-stopping low-block isolation. Keeping Aldridge outside also lowers his injury risk, at least theoretically.

The key takeaway is that this is a massive shift, one that shouldn't be written off as "not a big deal." It's worth tracking as the season unfolds to see if/how Stotts adjusts his use of Aldridge and/or if Aldridge changes his game, by attacking more off the dribble or setting up closer to the the hoop.