Irreverent Reflections from Media Day: Who Said What and What it All Means

A look at the good, bad, and ugly of the Portland Trail Blazers 2012 Media Day event.

Share All sharing options for: Irreverent Reflections from Media Day: Who Said What and What it All Means

Media Day 2012 has come and gone. You can read transcripts and the latest news all over the front page right now, including full transcripts of interviews with Head Coach Terry Stotts and General Manager Neil Olshey. If you haven't scoured those you need to, pronto! They're fascinating. But just in case you're having a hard time reading tea leaves and translating quotes into real life, we're here to help with analysis. Here's a list of important developments from the day, with suggested soundtrack music for each interview in order to get the correct feel as you evaluate.

This interview started with Portland's new head coach being "excited about the possibilities", followed immediately by the proclamation that Training Camp would be all about defense early. This caused Damian Lillard to break into a cold sweat. Adam Morrison immediately began to text the Detroit Pistons front office while J.J. Hickson stuck his hands behind his back, looked up at the ceiling, and began whistling softly. Nolan Smith ran into the bathroom and hurled which caused Will Barton to pity puke in response. Luke Babbitt just stood there looking confused at Stotts' proclamation until Smith whispered something in his ear, then Luke dived for the nearest garbage can and lost his lunch as well. Wesley Matthews just shook his head at his young teammates then calmly put five large on "3rd week in December" in the annual Center Injury pool.

Stotts cleared his throat and continued, explaining that LaMarcus Aldridge had plenty of ceiling left and Stotts intended to use him more around the free throw line, including opening up more driving possibilities. LaMarcus immediately fumbled the ball he was holding for promo pictures while six guys in fedoras ran for pay phones to buy up futures on steals and offensive fouls.

Lillard provided the next topic for Stotts, who compared the young point guard's arc and capabilities to scoring point guards Gary Payton and Jason Kidd. Blazers fans listening at a crack in the window nodded sagely.

Next came Stotts' promise to speed up the offense, a contractual obligation for all NBA coaches in pre-season. He cleverly hedged, saying the Blazers wouldn't fast break outright as much as get the ball up the court in 2-3 seconds, leaving the rest for halfcourt probing. A blind, bearded man in a filthy robe seated at a corner table was seen to scribble the following on a napkin:

2-3 seconds upcourt, 21-22 seconds of exterior passing to see who will take the jumper.

The napkin was scooped up by a waiter and deposited atop a pile of half-eaten cream cheese crackers.

Stotts offered that he expects Nicolas Batum to become a decent pick-and-roll player with the ball in his hands. Looking puzzled, Batum whipped out an English-to-French dictionary. Stotts added that Batum was under no pressure to justify his new contract, at which point Batum sighed in relief and pocketed the dictionary again.

When asked whether the Blazers would compete for a playoff spot, Stotts invoked their current 0-0 record and asserted that "wins take care of themselves". The rest of his reply was drowned out by a gaggle of wins in a back corner, diapered up and wailing because they were hungry.

When asked about his bench Stotts termed it, "deep, deep" and name checked Jarred Jeffries, Sasha Pavlovic, and Ronnie Price. Veteran Jeffries, ever helpful, said, "Coach, I think they mean your bench regulars." An assistant coach whispered something in the ear of Jeffries, to which the forward responded, "Oh."

The inevitable follow-up about most people's perception that his team is not deep elicited this response:

This league is a struggle. I've been on 60 win teams and we had blow-ups. There's always moments in the season that are struggling, depending on how the season goes. Like I said earlier, as long as this team competes and comes out every night, I think the fans will enjoy, whether we win or lose, everybody wants to win, I'm not taking that out of the equation, but we're going to compete. When you compete, there's always struggles. That takes care of a lot of the questions in that area.

Which, of course, it didn't. Not even the original one.

Where Stotts waxed enthusiastic about the present, General Manager Neil Olshey deflected every question into a discussion of Portland's future. The proceedings began with an inquiry about Olshey's biggest concerns, which he turned into a discussion of head starts, how much of his roster is already in town, learning curves, and being ahead of where they thought but not yet where they want.

When asked about his message to fans, Olshey began by crying, "Get on board!", detoured through "fight and scrap", pegged Will Barton as an NBA rotation player (causing Barton to dart for the restroom again), and finished by crowing about long-term cap flexibility and all the good players the Blazers didn't sign this off-season in order to preserve it.

Cliché Meter: 8 Non-Sequitur Meter: 5 (but only because they asked for "his" message, which technically means anything Olshey said would qualify, even "Zebra Monkey Pilgrim Doodle")

Who are the Trail Blazers today?

At this point Batum once again pulled out the English-to-French dictionary until Matthews laid a gentle hand on his wrist and told him to put it away.

The media then rephrased thusly: "Hooowwwww do yoouuuuuu describe the Traaiiillll Blazerrrrrs toooooo-daaaaayyyy?" Olshey put an earpiece to his ear while 62 translators from the United Nations ran through the question in their native tongues. The old, bearded man in the corner helpfully added it in Esperanto. Olshey then launched into a speech about emerging, about young players, about sustainability, about long futures with this group. 62 translators and one old coot shouted "TODAY!" in various languages. Olshey just shook the earpiece like it was broken and tossed it onto a plate of neglected brie sandwiches.

At this point the media threw up their hands and signed a collective agreement not to ask Olshey any question that would have bearing before March 22nd, 2017. They then inquired about using cap space to build for the future. Olshey began, "My job is to generate deal flow." The rest of his reply got cut off by the managing editor, head feature writer, and cover photographer for Buzzword Magazine. We actually got a sneak peek at next month's cover headline which reads, "Is 'Deal Flow' the New Paradigm Shift? Can Neil Olshey Leverage the Benchmarking on this Action Item?"

Sticking to their word, the media then went for, "How long until you're a title contender?" Olshey responded with his most honest reply of the day: "I don't know." He proceeded to count down the known quantities of the team (Hickson, Batum, Matthews) and the unknown (Freeland, Smith, Babbitt). He wondered if Babbitt could step up and be the player he was drafted to be. Babbitt was seen whispering, "I thought I was?"

The next question concerned whether or not the Blazers would pick up the option on Elliot Williams. Olshey replied:

We've got multiple guys we have to make decisions on. We've got to make decisions on Nolan and Luke and Elliot. We'll make those later in the month. Right now, based on the roster composition, we're going to evaluate it based on where we are today. We have to take our cap flexibility into consideration. Anybody that's a part of our core going forward is a valued asset and whatever impact they may have on our cap going forward is a non-issue. If there's an opportunity cost to picking up those options, we've got to evaluate that as well.

18 of the 20 media members present went, "Huh?" One reached for Batum's English-to-French dictionary. The final observer said, "Doesn't, 'Right now, based on the roster composition, we're going to evaluate it based on where we are today' mean you should have an answer to give us?" But Olshey's mouth was full of slightly warm Brie sandwiches and he couldn't answer.

When asked about Adam Morrison, Olshey allowed that Morrison was a "good kid" but that he was going to be held to a higher standard including defense, moving the ball well, and more defense. Morrison blanched and began texting Golden State.

Olshey was asked to compare Meyers Leonard to existing NBA players and offered Tyson Chandler. Leonard sat oblivious, listening to the new No Doubt album through his 'buds. Price tapped him on the shoulder and whispered in his ear. Leonard then smiled and gave Olshey a big Double Thumbs Up.

The next question involved specific metrics to judge this season's success. Olshey replied that it's not just winning, it's how you play. Some 40- or 41- win teams are hard to watch. The Blazers want guys who want to be here. A media member muttered, "But they could want to be here because nobody else would have them." This was overshadowed by the flashes for the Buzzword Magazine layout. The cameraman said, "Say cheese!" Olshey replied, "Future Cheese!" and smiled broadly.

Olshey's final question involved his perception of Portland's GM job. He claimed to love the media members, buttered up owner Paul Allen and his webcam watching skills, talked about babies and bath water, cap flexibility, and Euro players. At that point the Non-Sequitur Meter exploded. Olshey then jumped into a silver DeLorean, cried, "See you later guys...MUCH later!", and exited at 88 mph, leaving everyone dumbfounded except Meyers Leonard, who still had a goofy grin on his face. 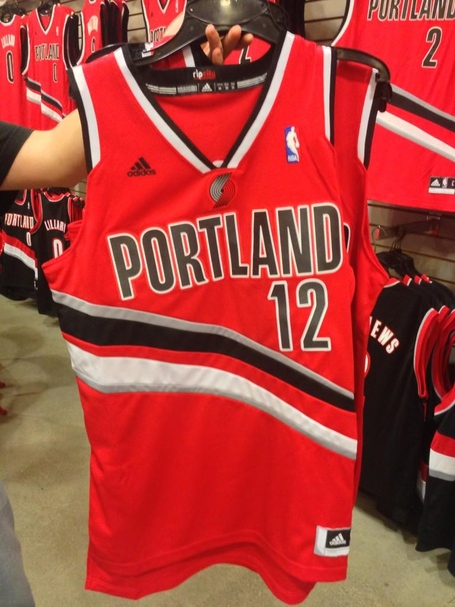