Portland Trail Blazers forward J.J. Hickson uploaded to Twitter this photo of himself with teammates Jared Jeffries and Wesley Matthews after the trio received cryotherapy treatment. The players are wearing headbands, surgical masks and heavy gloves to protect themselves during the treatments. Nicolas Batum (here) and Will Barton (here) also reported receiving the treatment. (via @Chold)

Just came from CryotherapyUSA. Athletes you haven't experienced cold until you do that. Cold tub ain't got nothing on it. Feels great after.

Cryotherapy has picked up some steam in the NBA over the last few years. By the looks of the sign in the background, the Blazers visited US Cryotherapy in Roseville, Calif. The company is located just outside Sacramento, where the Blazers will face the Kings in a preseason game on Monday night.

Whole-body cryotherapy was introduced in Japan in 1980 and subsequently worldwide. Cryotherapy is the whole-body or localized use of extremely cold temperatures in therapy (-76° to-166°F). The term "cryotherapy" comes from the Greek words cryo meaning cold and therapy meaning cure. The goal of cryotherapy treatment is to offer you better health and a faster recovery from injury. These benefits start with the reduction of inflammation, pain relief, and improved mobility. The cryotherapy process decreases cellular metabolism, increases cellular survival, decreases inflammation, decreases pain and spasm, and promotes vasoconstriction and vasodilatation which leads to increased levels of oxygenated blood delivered to damaged tissue. In the cold temperatures, the blood vessels quickly constrict forming a protective layer while the core body temperature is maintained. The process naturally stimulates blood circulation as the body's hormone, immune, and nervous systems are activated. Benefits of cryotherapy treatment have been widely publicized.

Here's a promotional video for the company.

Bryant also visited the Bayer 04 soccer club's new rehab center in early June to try out whole body cryotherapy, sitting in a chamber that dropped to minus-166 degrees Fahrenheit. The goal is for the body to fight inflammation and feel invigorated by the process, which is somewhat like a fuller scale ice bath - and the device is currently not available in the United States.

Ric Bucher of ESPN The Magazine wrote about the veteran-laden 2011 Dallas Mavericks using the treatment as well.

From late April right through to their final championship-clinching victory over the Heat, a sextet of Mavs -- Jason Kidd, Dirk Nowitzki, Jason Terry, Shawn Marion, Tyson Chandler and Brian Cardinal -- made the 20-minute trek from American Airlines Center to a wellness facility in Plano, Texas, two times a week. The grizzled NBA vets, all of whom are 33 or older except for the 28-year-old Chandler, would head to an upstairs room that had all the warmth of a no-frills clinic. They would strip to their underwear and socks, don fleece gloves and, one at a time, step inside a six-foot-tall, padded blue-green silo that encased them up to their necks (or, in the case of the seven-footers, Nowitzki and Chandler, up to their chests). A large metal bin next to the silo would begin to whir, and smoky vapor would swirl out of the chamber, as if the players were being cooked in a cauldron.

Actually, they were being frozen. For two and a half minutes -- at a cost of $75 per person, billed to Mavs owner Mark Cuban -- blasts of nitrogen-chilled air emanated from the walls, quickly dropping the air temperature to as low as -320 degrees Fahrenheit. By the last 30 to 45 seconds, their bodies would be shaking uncontrollably.

"The first time Shawn did it, I thought he was going to jump out after 30 seconds," Terry says. "He was yelling, 'My nipples are about to fall off!'"

The regimen is known as cryotherapy, and its devotees say it's an upgrade over the more traditional 15-minute ice bath athletes have long relied on to treat aching joints and muscles. There are, it seems, two problems with ice baths: No. 1, the coldest temperature a person can endure in a bath is 41 degrees; No. 2, when a body is immersed in cold water, it reacts by sending blood to its chilled extremities. But chilling the skin to extreme levels in less than a minute with cryotherapy prompts a different response: The body withdraws the blood to its core in an act of self-preservation. 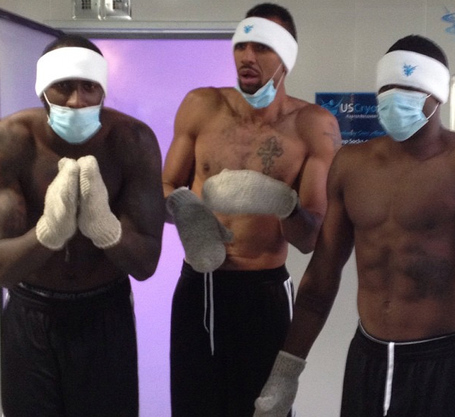