With Deadline One Week Away, Still No Meetings Set For Nicolas Batum Extension Talks

Share All sharing options for: With Deadline One Week Away, Still No Meetings Set For Nicolas Batum Extension Talks

Wednesday marks one week until the Portland Trail Blazers and forward Nicolas Batum face a Jan. 25 deadline for a contract extension.

Blazers Acting GM Chad Buchanan declined to comment on whether the negotiations with agent Bouna Ndiaye -- which included a face-to-face meeting in San Antonio last week -- have made progress over the last week. He said that "daily" communication continues between the two sides even though they have not met since last Friday and have no set plans to meet prior to the deadline.

"At this point we're still conversing and deciding whether it makes sense to meet again before the deadline," Buchanan said on Wednesday. "We haven't made a decision either way at this point, but we're still talking with Bouna, corresponding with him on almost a daily basis."

While the two sides left the negotiating table in San Antonio "very far apart," according to one report, Batum has played his best basketball of the season in the two games since the discussions thanks, in part, to increased playing time created by the absence of starting center Marcus Camby. Batum scored 29 points, grabbed 8 rebounds and blocked 4 shots in a Saturday overtime loss to the Houston Rockets and scored 19 points and added 6 rebounds in a Monday win against the New Orleans Hornets.

So what's up with no scheduled meetings?

"We signed three free agents without meeting face-to-face with anybody," Buchanan said, making reference to the December additions of Kurt Thomas, Jamal Crawford and Craig Smith. "It's not something that has to be done face-to-face. You can make a lot of progress talking on the phone and corresponding with an agent on something like this. If we get down close to the deadline and feel like a face-to-face meeting is important for us to do, and both sides are open to it, we'll do it at that point. I wouldn't read too much into the face-to-face meeting being crucial to making progress towards a deal."

Under the new Collective Bargaining Agreement, the Blazers are only able to offer Batum a 4-year contract prior to next week's deadline.

Below is a list of second contracts signed by twos, threes and fours, including when it was signed, the contract details and how old the player was at the time of the deal. All salary data via StoryTellersContracts.com. 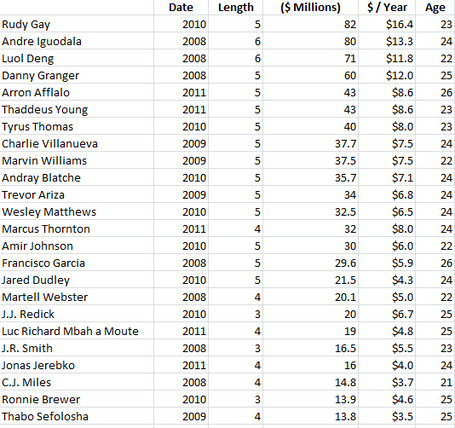 Batum, 23, would seem to fit fairly neatly into the $7-$9 million per year group. That group includes the likes of Trevor Ariza, Marvin Williams and Charlie Villanueva, signed under the previous Collective Bargaining Agreement, and Marcus Thornton, Thaddeus Young and Arron Afflalo, who all re-signed for between $8 and $8.6 million per year during the December signing period.

The 2011 deals do not appear to reflect any major discounting because of the new CBA. If anything, those deals, especially Thornton's, appear to be slightly inflated. Here's how Batum's 2010-2011 and 2011-2012 seasons compare to the seasons Thornton, Young and Afflalo had prior to signing their extensions.

Sizing up the contract landscape, it's difficult to imagine there's that much separating the two sides. There don't appear to be any major red flags that would prevent either side from agreeing to a 4-year deal and the market seems very well set for someone with Batum's production when it comes to dollars per year. Batum seems committed to Portland long-term and vice versa. The lure of a 5-year deal is a potential wild card but immediate long-term certainty would seem to have value for both player and team.

The reasonable window for negotiations right now would seem to be a 4-year deal worth between $28 and $34 million. The two sides should be able to work this one out.

Sean Highkin of Portland Roundball Society posted a great breakdown of Batum's season and the ongoing negotiations this past weekend.