Share All sharing options for: Blazers G Raymond Felton Has Been Terrible But It Will (Probably) Get Better

New Portland Trail Blazers point guard Raymond Felton has gotten off to a terrible start during the 2011-2012 season. That hasn't been a secret since opening night. A Monday win over the New Orleans Hornets typified the struggles: 1-for-8 from the floor, 0-for-3 from deep, 2 points, 8 turnovers.

The Blazer point guards are a continuing train wreck. Raymond Felton turned the ball over eight times in 37 minutes and Jamal Crawford had four in 23 minutes. Neither guy can consistently hit shots. Long-term, this will not work.

Jason Quick of The Oregonian writes...

On the list of concerns, none are more alarming and obvious than the poor play at guard, where newcomers Raymond Felton and Jamal Crawford are still getting acclimated.

So far this season, if Felton and Crawford aren't turning the ball over in bunches, they are missing shots like a fan during a timeout promotion. And if they are protecting the ball during the first three quarters of the game, they are coughing it up in crunch time.

As of Tuesday, Felton ranks as the No. 50 point guard in the NBA when it comes to PER; he's currently squeezed between Earl Watson and Mike Bibby on that efficiency leaderboard. Last year, Felton was No. 17. For his career, he's generally been in the mid-to-low 20s, with one season at No. 35.

For comparison's sake, last year's No. 50 point guard was Gilbert Arenas. Felton is being blown out of the water by both Ty Lawson (No. 6) and Andre Miller (No. 28). He's the ninth best point guard in the Northwest Division. Let that one sink in.

Indeed, if you run a side-by-side comparison between Felton and Miller -- the two point guards were traded for each other on the night of the 2011 NBA Draft -- there's no comparison. Miller's raw scoring and assist numbers are slightly lower because he's coming off the bench in Denver, but he's shooting better, he's shooting better from deep, he's turning the ball over way less, he has a significantly better assist to turnover ratio and all of the advanced statistics (PER, Value Added, Estimated Wins Added) are heavily in his favor. Numbers via HoopData.com.

How did we get there? Well, there has already been a highlight tape worth of blunders for Felton in Portland's first 13 games, starting on opening night against Philadelphia. He's lost the ball while crashing to the floor on critical possessions; he's tried and failed to complete an unnecessary behind-the-back pass on a critical possession; he's lost the ball off his leg on a critical possession; he's thrown the ball away for uncontested lay-ups the other way on the first possession of a game multiple times; he's missed free throws in key moments; he's zipped passes off his teammates' hands and, more than anything, he has bricked shot after shot to the tune of 14 percent from deep.

Monday's performance also typified just how unusually bad Felton has been this season compared to previous years. Why? Felton has played 487 NBA games and has accumulated 8 or more turnovers on just three occasions -- the last time being October 31, 2009 -- before Monday. The 27-year-old veteran is currently shooting worse than he did as a 21-year-old rookie and he is currently converting just half as many three-pointers as his previous career-low. This from a player whose overall shooting percentage hasn't moved much in the last four seasons, even if his three-point shooting has hit peaks and valleys. 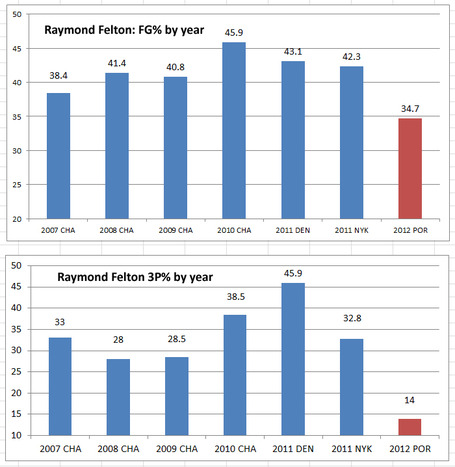 His turnover rate, also virtually unchanged over five NBA seasons, is significantly higher than ever before. 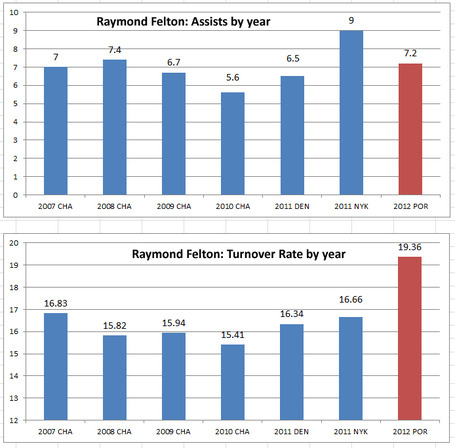 As Kevin Pelton of Basketball Prospectus and other Felton defenders are quick to point out, there is one element of his game that's proven to be stable: his distributing. Felton's 7.2 assists per game are in line with his previous production. You could argue -- and certainly those who traded for him would -- that Felton is therefore accomplishing his primary objective, despite the major early-season funk. That's small consolation if incompetent ball-control is one of your pet peeves, but it does need to be acknowledged.

Like pretty much everyone else on Portland's roster, Felton is in a contract year. He's in a prototypical situation where a player stands to earn tens of millions of dollars: The Blazers have no other readily-available, starting-quality options, he is a theoretical fit on paper given his skillset, he's about to enter his prime years, he's remained extremely durable and avoided major injuries as a pro, and he has the opportunity to play as many minutes as he likes with the ball in his hands.

It's surprising, to this point, that this equation is adding up to his worst year as a pro. Felton's raw numbers took a hit during his 2009-2010 contract year in Charlotte, too, but he at least shot the ball well and limited his turnovers.

Thanks to the shortened season, hopes for a career year from Felton are probably already out the window. But, given Portland's 8-5 record to date in spite of Felton's struggles, the Blazers don't really need a career year. At this point, a slightly below average version of his previous production would more than suffice. Maybe it's time to start bringing "Strive For Average!" signs to the Rose Garden.

You might be wondering why Felton gets the microscope treatment here and not Crawford. After all, Crawford, too, is turning over the ball at nearly a career-high rate and is shooting at career-low marks from the field and from deep so far this season. The answer should be obvious. Felton is a 27-year-old starting point guard whose future in Portland is a key plot line; Crawford is a 31-year-old reserve scorer whose short-term impact far outweighs his long-term impact. Crawford, also, is playing as a slightly worse version of himself and he's always been known as a streak shooter, that's his key identifying characteristic. His reputation is formed.

Felton, as shown above, is off his own charts bad through the first 13 games. Yes, he's a bit of a used car, but he hasn't been a true lemon during his NBA career, at least not until this season. It doesn't really matter which excuse you use to explain his struggles -- conditioning, the lockout, new teammates, new coach, putting too much pressure on himsef, etc. -- the safe money says that if Monday wasn't the absolute bottom, it was close.