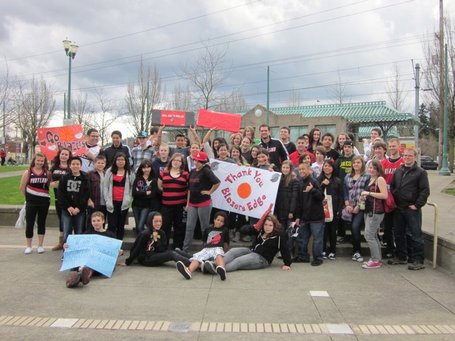 In a world of instant news access, a week can make a sensational event turn into been-there-heard-that. BUT NOT THIS EVENT! What happened last week at Blazersedge night was so special. Dave and all you BE Fans that bought a ticket made so many lasting memories. As a teacher who took 60 of my students, I am still surrounded by the Blazer buzz of this experience. My students feel so proud, so special to have been chosen to attend this event. And what event it was.Dave was even sitting in our section! It didn't totally sink in until I laid my head on my pillow that night. I was overcome with that unique, deep feeling of joy that doesn't happen everyday - the feeling that causes sensational events to become been-there-gonna-remember-that-forever.

Dear Blazeredge,
The Blazer game on Friday, April 1st, 2011 was an amazing experience for me. It was my first time going to a Blazer game, and I am a big basketball fan. I have been playing basketball for about six years now and I’ve just come to be in love with the sport. Before switching to basketball, I played baseball for about 3-4 years and I decided I felt like a change and decided to switch sports. While in the store with my mom, I saw basketball items and pictures and I set my mind on to try basketball. During the basketball game on Friday, I did not stop yelling. My attention was intently on the game, I was yelling with the crowd when the Blazer’s scored a basket, especially when they made a 3-pointer or even made a spectacular dunk. I think the highlight of the baskets made that game was the amazing dunk Rudy Fernandez pulled off after a missed 3-pointer. It was amazing to see all the free giveaways they held and it was really fun when they shot free t-shirts out to the crowd and even some audience members got to be on TV. Luckily, my school, Clear Creek Middle School, got the chance to be on TV twice. The first time was when the Blazer Cheerleaders came up to our section and handed out free pizzas, and the second time was when they were cameras filmed signs and our school got our signs on TV.
Before the game, I was quite excited, so excited it was pretty hard for me to sit still. When we were waiting to get our tickets right outside the Rose Garden, I could hardly contain my excitement. To see an official NBA team with my favorite team playing was better than I expected. It was exciting to see the half-time show with the archer and the amazing 12 year old who sang the National Anthem. It’s pretty extraordinary to see a girl almost my age sing the National Anthem at a professional basketball game that is being aired on TV. It must be quite an honor. The cheerleaders also put on an amazing performance when they came out. All throughout the game, I was yelling and cheering on the Trail Blazers. I got to say though, the game was quite intense. The Blazers were losing in the 1st quarter and some of the 2nd quarter. Then, they came back and put a spectacular finish to the game. It was pretty cool to go to a game where the Blazer’s won, especially when it was my first time.
The only down part was how expensive everything was. I was expecting such high prices, but when you’re going to be at the Rose Garden for quite a long time, you get hungry and thirsty and you have to pay so much money to quench your thirst and satisfy your hunger. But that didn’t really ruin my experience because I had so much fun! I’m really excited to go again sometime to experience the thrill and excitement of a sport that I love. It was kind of bad that I was practically the only person in my chaperone group on the field trip that knew about basketball. My group kept asking me if the fouls were good or they were waiting for me to start yelling when something good happened. It kind of felt weird to be the expert out of my group. I was really into the game though. When fouls got called against the Blazers, I was right with the crowd booing. Also yelling DEFENSE! When the Blazers were playing defense. Another thing I did with the crowd was make a lot of noise when the Thunders were shooting free throws to hopefully make them miss.
I’ve seen a lot of NBA games on TV, especially Trail Blazer games, and this was an amazing experience. Thank you for giving tickets to the AVID classes at my school! I really appreciate the fact that you gave tickets to us for free! Thank you so much! I had such a wonderful time and the game will probably be a memorable event for me for awhile. Once again, thank you so much!
Thanks,
Cheyenne Gordon – 7th Grade AVID class, Clear Creek Middle School