The Golden State Warriors loosely waltzed into the Rose Garden and drop-kicked the Portland Trail Blazers, 108-87, dealing the home team its largest margin of defeat (21 points) at the Rose Garden this season.

The Blazers shot 3-21 from three-point land tonight and guess what? Coach Nate McMillan bemoaned his team's inability to make shots after the game. Stop me if you've heard this before: "Tonight was bad. It was just one of those nights where we started off bad. Six turnovers in the first quarter which is one of the things you cannot do against this team. Shooting never came around. A bad game. One of those games where you burn the tape and move on."

"Tonight was one of our worst nights shooting," Blazers forward LaMarcus Aldridge added. "A lot of open looks, guys had a lot of open shots and we just didn't make them tonight. Just one of those nights."

Aldridge was right: Only once this season have the Blazers shot worse from deep than they did tonight. That was all the way back in November when they went 0-14 against the Bulls in Chicago. But don't let that fool you. Tonight was not an anomaly by any stretch. If McMillan really burned all the ugly game tape created this season, he would be forever compromising his organization's reputation as a foremost advocate of environmental causes. It wouldn't be a controlled burn; it would be a wildfire.

Let me throw a few numbers and a chart at you. Stick with me because this is going to have playoff implications.

To illustrate the valleys, take a look at this chart which shows Portland's season progressing from left to right. The team's collective three-point percentage is represented by the blue line. The league's average three point percentage (35.9%) in represented in red to serve as a reference point. 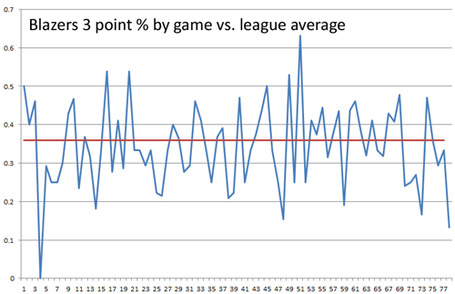 They're entering that series -- against either the Los Angeles Lakers, San Antonio Spurs or Dallas Mavericks -- with a giant, glaring weakness with no known remedy. This is the team this year, a group that can look anywhere from solid to spectacular on three out of four night but looks absolutely atrocious on the fourth, leaving their coach speechless and without the ability to explain what happened.

It all begs an uncomfortable but necessary question: how many times will McMillan be left speechless in late-April?

Aside from a major, major night from David Lee -- who went off for 29 points, 20 rebounds, two assists, two steals and a block in 31 minutes, outdoing Aldridge's 17 points and 12 boards -- Portland's biggest culprits on Tuesday night were reserve guards Brandon Roy (2-11) and Rudy Fernandez (1-9).

An extremely disengaged Roy took responsibility afterwards. "I thought we got off to a slow start and then we came off the bench and me and Rudy didn't do much tonight to help us," Roy admitted.

Roy and Fernandez's combined 3-20 made an ugly game worse but it wasn't solely their responsibility. The Blazers were unable to exploit their backcourt size advantage -- a topic McMillan didn't want to touch in any detail -- and Wesley Matthews and Nicolas Batum combined to shoot 2-11 from deep on the same night they combined to shoot 11-14 on two-pointers. "I think we got caught up in jump shooting a little bit," Andre Miller said, delivering a hefty understatement.

To this point, everything's been about Portland's offense, which was bad. The defense wasn't much better, as the Warriors got pretty much anything they wanted and never bothered to seriously venture outside their top three guys: Lee, Monta Ellis and Stephen Curry. The trio combined for 87 of Golden State's 108 points and they did it shooting a combined 34-57. The fun-and-gun Warriors play well without any weight on their shoulders and they play even better when the team defense and alertness of their opponents is lacking.

"We've got to come to play or we can get our butt kicked," Roy said.

Tonight was bad. It was just one of those nights where we started off bad. Six turnovers in the first quarter which is one of the things you cannot do against this team. Shooting never came around. A bad game. One of those games where you burn the tape and move on.

How do you explain that second half?

3-21 from the three-point line. We didn't turn the ball over the second half. They were just -- I thought we looked a little tired the whole game. Just not reacting. We looked a little winded early in the first quarter and they pretty much had their rhythm, their tempo. It was one of those games we can't explain that, I can't explain it.

Did team find out they were in playoffs at halftime?

We haven't talked about that.

Basically snapped his neck back. Whiplash. We don't think it's anything serious but I kept him out the rest of the game.

Read into this loss?

It's a loss. We played bad. We've played better. We've been doing some good things and tonight was one of those nights that it was bad. Simple as that. Didn't play well. They came out -- Monta Ellis was Monta Ellis, pretty much couldn't stop him. But we never established that we could execute an offense tonight or defensively we could stop them.

Message to the team

What I just told you. This is one of those games. We've got to put this behind us and get ourselves ready for Utah.

No posting up small guards with Miller?