Another Look At Portland's Outside Shooting Woes

Share All sharing options for: Another Look At Portland's Outside Shooting Woes

About three weeks back, after watching another brickfest in the Rose Garden, I went on a bit of a rant about Portland's outside shooting.

The Blazers shot 3-21 from three-point land tonight and guess what? Coach Nate McMillan bemoaned his team's inability to make shots after the game. Stop me if you've heard this before: "Tonight was bad. It was just one of those nights where we started off bad. Six turnovers in the first quarter which is one of the things you cannot do against this team. Shooting never came around. A bad game. One of those games where you burn the tape and move on."

Tonight was not an anomaly by any stretch. If McMillan really burned all the ugly game tape created this season, he would be forever compromising his organization's reputation as a foremost advocate of environmental causes. It wouldn't be a controlled burn; it would be a wildfire.

It all begs an uncomfortable but necessary question: how many times will McMillan be left speechless in late-April?

Well, five games into the series we have a pretty solid answer. And, much to my dismay, it was worse than expected.

On the season, Portland shot 34.5% from deep. That was good for 21st in the league in terms of percentage. Through five games against Dallas, Portland is shooting 31.6% and currently ranks 11th out of the 16 playoff teams in terms of three-point percentage. (It's worth noting that league average has also slipped during the playoffs: from 35.8% to 34.2%). A critical weakness has gotten worse.

During the regular season, Portland managed to shoot above 25% from deep in roughly three out of every four games. In other words, putrid outside shooting was a regular occurrence but at least it wasn't the norm. Unfortunately, during the playoffs, Portland has already shot at or below the 25% threshold three times in five games. Twice (Games 1 and 5) it resulted in a loss. Only a miracle 12.5 minutes from Brandon Roy prevented the third time (Game 4) from being a loss as well.

That puts Portland at 6-17 on the season when they shoot 25% or less from deep. What's more: Portland is now 0-10 on the road this year when they can't shoot above 25% from downtown.

Here's the updated chart -- which compares Portland's three-point shooting percentage by game to regular season league average (the red line) and the 25% mark (green line). The chart runs from the beginning of the season to the end of the season left-to-right. Click on it to enlarge. 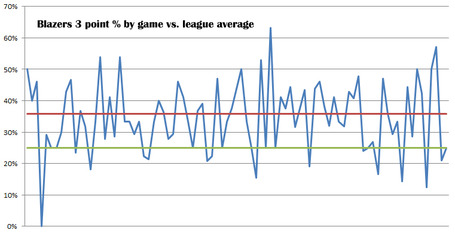 The most troubling issue for Portland is the team's collective inability to shoot the basketball, which happens to be a key factor in NBA games. The Blazers' three-point shooting, a weakness during the regular season, has been further compromised by Rudy Fernandez's disappearing act during this series. Fernandez did make one triple for his first field goal in four games, but that was the exception on a night where Portland shot just 4-of-16 beyond the arc. Yet the team's troubles go beyond long-range jumpers. On two-point shots outside the paint, the Blazers were 6 of 22 (27.3 percent).

Shoot like that and eventually the opposing defense will simply sit in the paint and dare you to make shots. Increasingly in this series, that's exactly what the Mavericks have done. On Monday, we saw extended zone defense from Dallas for the first time. Portland had some success against the zone in the first half, largely because Andre Miller attacked off the dribble and was able to drain a rare three, but after halftime the Blazers were stifled against both man and zone.