I never really mix Blazersedge stuff with real life stuff, but I'm making a small exception here for the benefit of any readers in the Palouse area of Idaho/Washington, including students at Washington State, the University of Idaho, Lewis and Clark State, and residents of Moscow, Pullman, Lewiston, Clarkston, and even Spokane or Coeur d'Alene.  The Trail Blazers won't be playing yet on Friday, April 15th but your friendly neighborhood blog host will be.  The band Barely Gifted is putting on a special benefit concert for Alternatives to Violence of the Palouse, our local organization that helps victims of domestic violence.  ATVP offers counseling, shelter, education, legal assistance...you name it, they do it.  This work (properly in some ways) goes unheralded and un-thanked by the general public.  So we decided to put on a concert to herald and say, "Thank You".

The concert will be 7:00 p.m. this Friday at the Kenworthy Performing Arts Center at 508 S. Main in Moscow, Idaho.  It's not exactly Carnegie Hall but it's one of the better venues in this corner of the world.  Admission is free!  The primary purpose is to enjoy some great music and to show everyone that yes, people do know about and care about this issue.  If you bring a couple bucks to drop in a jar on the way out the door after a night of good music, that's cool, but even showing up would be great!  The band is cool and the music is all original, so you'll want to give it a listen even if you have to drive the hour or so south from Spokane to do it!  (Or, you know, take a private helicopter in from Seattle if you know what I mean.  We might even let you sit in if you do that!)

I know our reader density isn't massive in this corner of the world but I figure there might be some folks out there who'd like to see another side of their blogger.  If you do come, stop by the stage after and let me know you're from Blazersedge.  I'll be happy to say hello! 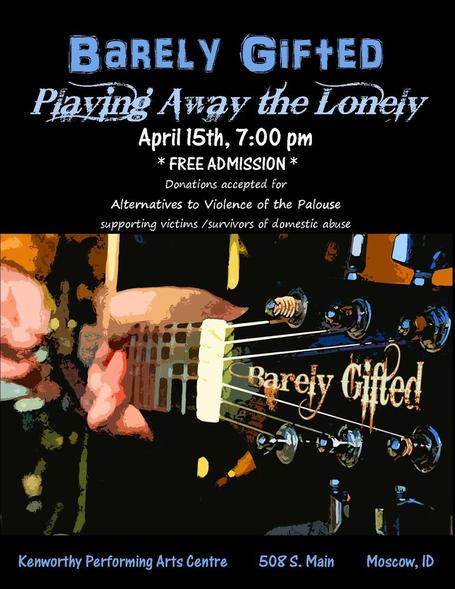 We now return you to your regularly scheduled blog posts.