The Portland Trail Blazers put a monumental beating on the Cleveland Cavaliers, racing ahead to a ridiculous early lead and winning so easily that it was boring, 111-70, in the Rose Garden on Thursday night.

The only fun or productive thing to do during this game was to play the great parlor game of extrapolating the current score to create an imaginary final score at the most ridiculous moments possible. For example, six and a half minutes into the game, the Blazers were on pace to win 155-17. Yes, you read that correctly.

How quickly the Blazers jumped out on the Cavaliers was rivaled only by how quickly their coach jumped on them in his post-game press conference. After an extended time in the locker room after the game, Byron Scott addressed reporters and came right out with it in his very first sentence.

"Our team is just so soft mentally, it's unbelievable."

"I think last night, winning that game [against the Sacramento Kings], we come in here and forget we've got to play a team that's much better. I think our guys don't understand that the team we beat the other night had 15 [or] 16 wins. This team that we played [tonight] is fighting for something and they came out and played like it."

Brutal. Enough of that, it reads like the coach-on-team equivalent of Ronnie disparaging Sammi on Jersey Shore.

Anyway, back to the extrapolations. After one quarter: 148-48. After two quarters: 128-68. Just ridiculous. You get the picture. And now, you'll get some picture charts.

I conceived of these sometime during the third quarter when my brain sent a text message to my iPhone which read, "The Cavaliers are so pathetic that I will go on strike if you don't figure out a way to use me in the next 10 minutes."

First, here's a chart of the game by minute, with Portland's extrapolated point total in red and Cleveland's in blue. Yes, the numbers on the Y axis are accurate, but you're excused if you did a double-take or adjusted your three goggles. 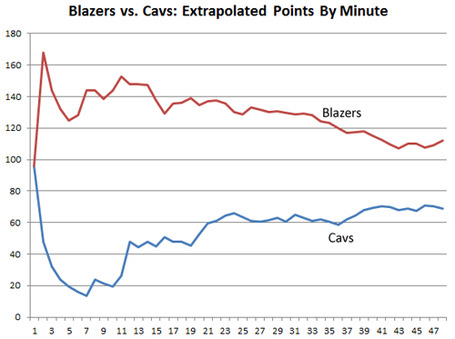 The Blazers were projecting to score 140+ points as late as the early second quarter and 120+ as late as the late third quarter. This for a team that plays the slowest pace in the league and whose season high point total is 113 points.

Meanwhile, the Cavaliers hit their low-water mark when they were down 21-2 seven minutes into the game, as they were on pace to score just 14 points. That's just... I don't even know. They didn't project to pass 60 points until 21 minutes into the game. At no point during the game (after the opening minute) did they project to score more than 71 points. By comparison, the Blazers never (after the opening minute) projected to score less than 107.

So, now, let's put those two charts together to extrapolate Portland's margin of victory by minute. Again, take a look at the Y axis. 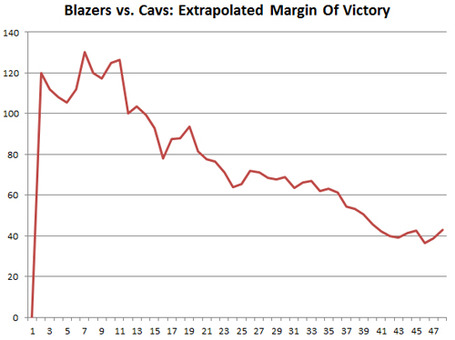 Yes, you read that correctly. The Blazers were projecting to win by 100+ points into the second quarter, projecting to win by 80+ points when the game was almost at halftime and projecting to win by 60+ points as late as the end of the third quarter. The final margin of victory, 41 points, smashed Portland's previous season high of 26 against the Milwaukee Bucks in December. No other time in Basketball-Reference's database (dating back to 1986) have the Blazers scored 111+ points and held an opponent to < 70 points.

If you're looking for a deep meaning or life lesson from these charts there isn't one. Other than: They help me feel completely comfortable calling this the single worst performance by a professional team that I have ever witnessed in my life. I know I get worked up and am prone to hyperbole, but I make that statement as frankly and emotionlessly as possible.

If Dan Gilbert wasn't involved, I would be overwhelmed with sympathy right now.

Blazers didn't play down to competition

No, I thought they were professional about their approach. We wanted to use this game to continue to work, to get better. To work on some things. I thought the defense was really good, the pressure was really good on the ball, we wanted to, since putting Wallace in the starting lineup, we wanted to look to extend our defense and trap a little bit and had an opportunity to work on that. Offensively we didn't get too sloppy. Good execution and good ball movement. It's always good to knock down shots.

Easy win at this time of the season

For us, we needed one. We haven't really had a lot of games like this, from start to finish. Stayed focused. Wasn't trying to embarrass Cleveland or anything like that. Work on our game and try to get better. We know we are going to need to get better and we had a gameplan, I thought they guys went out and executed it tonight.

Good ball movement. We're knocking down shots. But I thought it started from the defensive end of the floor. I thought we got ourselves in the game with pressure, traps were good. Forcing turnovers and everybody shared the ball.

What can you take from that game?

Hey, stay focused. Our approach, don't play Cleveland's record. It's a game and we need to stay focused and play a good game tonight. Philly is coming in next, they've beaten us, I think, four out of five times. They're playing well, a back-to-back with the Lakers. We need to work on a rhythm, getting a rhythm and trying to keep that rhythm. So, yeah, a good game, a good win, and now we get prepared for Philly.

What factored into when you took rotation guys out in the fourth quarter?

I was working on rotations. We got to a point where I thought we needed to get those guys out.

The game was in hand?

That game, it's a whole quarter, I mean, play the game. We're not ... guys can get minutes. We're playing that game to work on our rhythm and how soon do you take them out?

Sooner than you did.

I'm coaching here. I'll get them out when I want to.

Armon gets up shots. I think he played three minutes and had five attempts. He had two attempts on one. He works. He's very aggressive pressuring and attacking.