The Portland Trail Blazers announced on Tuesday morning that they have signed veteran big man Jarron Collins to a 10-day contract, confirming Monday's chatter. The signing brings Portland's roster to 14 players, leaving one spot open. Collins will be available for tonight's game against the Houston Rockets. 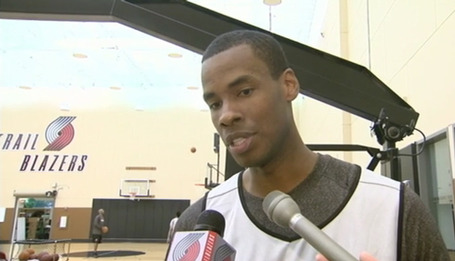 As noted last night, if Collins' name sounds familiar it's because he was a 2009 training camp invite and was one of three players - along with Ime Udoka and Blazers guard Patty Mills - in competition for the team's 15th roster spot. Mills won out and Collins eventually found a spot with the Phoenix Suns before signing with the Los Angeles Clippers this season.

Because Alvin Gentry wanted to keep Channing Frye in a sixth man role when Robin Lopez was sidelined, Jarron Collins earned the distinction of being one of the worst players to start playoff games in league history. Lopez's return to the lineup pushed Collins back to the end of the bench, a more appropriate role at this stage of his career.

In fairness to Collins, our individual metrics fail to pick up his biggest strengths. He's excellent at defending the post and very good at taking charges. Still, the rest of Collins' game is so weak that he is a liability. He rarely shoots the basketball yet is still an inaccurate shooter. Collins is also a poor rebounder; last year's rebound percentage was the best of his career. As a result, Phoenix was 7.0 points worse per 100 possessions with Collins on the floor. If basketball offered a platoon system, he would have value, but it is too difficult to score playing 4-on-5 at the NBA level. Collins will attend training camp with the Los Angeles Clippers, where he will battle Jake Voskuhl for a possible spot for a third center.

A 10-day contract carries Collins through tonight's game plus games against the Sacramento Kings (March 2), Charlotte Bobcats (March 5), Orlando Magic (March 7) and Miami Heat (March 8). Collins would then be eligible for a second 10-day contract.

Collins helps shore up a front line that lost centers Joel Przybilla and Sean Marks and forward Dante Cunningham to the Charlotte Bobcats in the Gerald Wallace trade.

The Trail Blazers roster stands at 14 players with today's signing.

Picture via this Blazers.com video.