Once the Portland Trail Blazers completed their call with the league office to finalize their trade for Charlotte Bobcats forward Gerald Wallce, President Larry Miller and GM Rich Cho held a press conference at the Rose Garden to discuss the trade. The Blazers sent reserve center Joel Przybilla, reserve center Sean Marks and reserve forward Dante Cunningham to the Bobcats along with two future first round draft picks.

The two first round picks the Blazers sent to the Bobcats included: a first round pick they received from the New Orleans Hornets in exchange for guard Jerryd Bayless earlier this season and their own, future first round pick. Here are the pick protections. 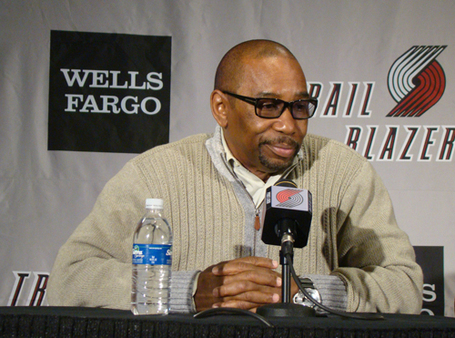 Blazers President Larry Miller may have spent hours involved in the trade process, but he couldn't have spent more than a few seconds coming up with his lead statement this afternoon. "It's a great day to be a Trail Blazer," Miller said, before going to to praise owner Paul Allen's commitment to winning and GM Rich Cho's work ethic. "I want to thank Mr. Allen for providing the resources and the support to this organization and to the staff here to allow us to do the things to build this championship organization. I just want to thank him. I want to thank Rich and his team for all of the effort they've put out, the calls they made, the time they put in, trying to find the best deals for us out there."

Miller said he sees the Wallace trade as another example of the organization's drive to win and as a method for improving its stake in the Western Conference playoff picture. "Today we continued the commitment this organization has to build a championship team here," Miller said. "The move we made today definitely we feel helps us in terms of our positioning in the Western Conference and we've been impressed with the team that we have here. With the current team under [Coach] Nate [McMillan] and the things they've been able to do. The fact that they've made no excuses, they've continued to play hard and deliver on the court.Finally, Miller made a point of calling the completed trade a team effort. "Mr. Allen, Rich, Nate, myself, the entire team, really worked together to get this deal done. This was really an effort that we all were involved in the process, we all worked closely together and were able to make this happen by working together as a unit, as a team." 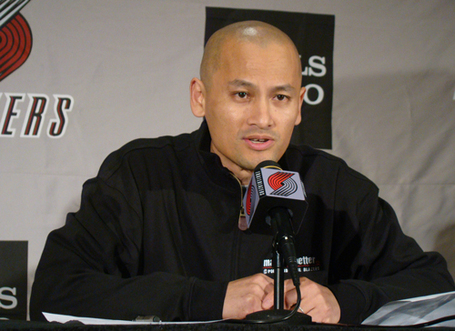 Blazers GM Rich Cho fielded a number of questions about the trade process and about Gerald Wallace the player, the person and the roster component.

"When we looked at a lot of different trades during the trade deadline, acquiring Gerald Wallace was at the top of the list," Cho said. "He exemplifies everything we are looking for in a player. He plays both ends of the floor, his work ethic is tremendous. All the intel and background work we did on him came out great, he has great, high character and we think he'll be a great complement to the team. He has a lot of toughness, his nickname is 'Crash' for a reason. He just plays really hard."

Cho said the process to trade for Wallace started "a few months ago" and went through multiple iterations. As recently as this morning, Cho said he wasn't sure the Blazers would complete a trade, let alone this one. "This morning we thought would stand pat," Cho said. "We were sitting in my office, me and my staff, and thinking 'well, it doesn't look like anything is going to happen.' All of a sudden we had about five deals we could have done."

The trade didn't go official until seven minutes before today's noon deadline. "The trade did not get consummated in principle until 11:53 AM this morning," Cho said. "All the variables in the trade, the terms and conditions, we didn't come to an agreement until the very end. We're thrilled to death to have him."

Cho envisions Wallace playing a number of roles for the Blazers, saying that he could either start or come off the bench at both forward positions, playing alongside or behind LaMarcus Aldridge. "If we're playing New Orleans he can match up and guard David West, he can match up and guard Trevor Ariza," Cho said. "If we're playing the Lakers he can guard [Ron] Artest, he can guard Lamar Odom."

He would not commit one way or another whether Wallace will be used as a starter or a reserve. "As far as starting that's going to be up to Nate," Cho said. "He will play significant minutes. He will play starter-type minutes."

Wallace's addition will also free up Nicolas Batum to defend point guards more often, Cho noted. This could perhaps lead Portland to play a lineup that includes Brandon Roy, Wesley Matthews, Batum, Wallace and Aldridge, with Roy initiating offense and hiding out on the weakside on defense.

As far as logistics, Wallace will wear jersey No. 3 and will arrive in Portland on a flight that departs Charlotte at 6 AM. His availability for Friday night's game against the Denver Nuggets is not yet known but is possible assuming all the players involved in the trade pass their physicals.

The move -- which sent out two backup centers -- leaves the Blazers with thirteen players and a lack of frontcourt depth. "LaMarcus has played a lot of center," Cho said. "We might go out and find a center as well, or another position. We have a couple of roster spots open. We might add to the team that way."  Cho later said it is "very possible" that the Blazers will add to their roster.

While it's always difficult to read Cho's mood, he seemed happy and satisfied, although not giddy by any stretch. "One thing I really believe in is accumulating assets, acquiring picks and young players," Cho said. "It's for this very reason -- to acquire better players to improve the team. If you look at some of the deals that were made recently, like the Deron Williams trade that Utah made. One of the big reasons they were able to make that trade is because they had those two picks and that was really attractive to Utah. I really believe in accumulating assets and turning those assets into players to improve the team."

In follow-up interviews, Cho was asked whether the Blazers might try to re-acquire Przybilla if he was given a buyout by the Bobcats. A similar situation allowed then-Cleveland center Zydrunas Ilgauskas to return to the Cavaliers after a thirty day waiting period last year. "I don't want to get into that because he's their property now and they want to keep him, they like him," Cho said, appearing to nix the possibility.

The trade pushes Portland's payroll -- which was already above the luxury tax line -- up slightly. Cho said that the financial implications of the deal did not cause any hesitancy. "Mr. Allen has made a commitment to winning. He showed it today. With the caliber of player that Gerald is, we are thrilled to get him. After this trade we're in the tax a little more, but you have to give up something to get something."