Wesley Matthews: "Maybe I'll Be An All-Star One Day"

Share All sharing options for: Wesley Matthews: "Maybe I'll Be An All-Star One Day"

Deep in the bowels of the sprawling Los Angeles Convention Center, Portland Trail Blazers guard Wesley Matthews went through practice on Friday morning in preparation for tonight's Rookie / Sophomore challenge. To find him, I rode in the largest freight elevator I've ever seen, wandered through hallway after hallway, concourse after concourse, negotiated a trade agreement with the Phillipines and then finally stumbled upon a court surrounded with hundreds of members of the global media, extra-bright lighting and 20 or so of the NBA's best young players.

You won't be surprised to find out that, even given the weird basketball setting and media overload, Matthews was the same old Matthews, grinning from ear to ear, throwing up his three goggles, playing harder than everyone else, icing his ankle afterwards, and thanking his mom for her support.

"I didn’t have a goal or mission to make this game," Matthews told me, as he's told dozens of others before me. "My goal is to just get better every day, God blessed me with the ability to be a part of this."

Although he's just a few hours flight from Portland, Matthews nodded when I asked whether it all felt a long way from home, what with Hall of Famers rolling around in packs and the collection of future stars: Matthews took reps with Stephen Curry, Brandon Jennings and DeJuan Blair before the rookies, led by John Wall and DeMarcus Cousins, took the court.

"It’s different," Matthews said looking around as television crews from Russia and Japan milled nearby. "It’s different. It’s an amazing feeling. It’s great to be a part of ... I trained hard during the offseason, worked hard during the season, but our team is having success. Hence why I’m here. My success is my team’s success and I can’t really stress that enough."

The experience won't be complete, he said, without a win, a three-pointer and the goggles, his way to give back to Blazers fans. "To complete the experience? A win and I've got to hit a three," Matthews said laughing. "A couple of them. They’re waiting for me [back in Portland] to throw them up.  "When  I throw [the goggles] up, it’s for everybody. It’s for Portland, it’s for Milwaukee, it’s for Madison. Oh yeah, I gotta represent tonight ... I appreciate the Blazers fans more than they know. Fans don’t know the kind of support and emotion they give players, athletes on the field. The fans have your back, to know that they support you, it means everything." 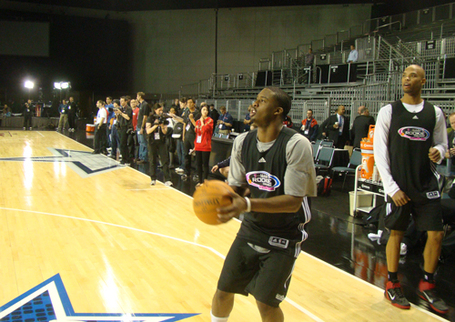 Matthews came across content rather than "happy to be here." He knows he belongs and he's looking to savor the moment. He brought his family out to Los Angeles for the weekend and smiled when asked how his mother is enjoying the trip. "She’s just excited," Matthews said. "She’s being a mom right now. Rather than being a coach for 21 years, now she’s sitting back and being a mom."

As I wound my way to the next event, I ran smack dab into Clyde Drexler and David Robinson, and then turned a corner and almost tripped over a crawling baby, only to have an attentive Chris Paul scoop up the child as smoothly as he dishes assists. Later, Charles Barkley got in line behind me to enjoy a quiet lunch, photo-bombing my self-portrait in a major way.

Like Matthews said, the entirety of the experience is just different. A bit surreal, and very inspiring.

"If I can get 1% better each day, maybe I’ll be an All-Star one day," Matthews said as the morning media session wrapped, smiling as always.