Joe Freeman of The Oregonian reports that the Blazers have confirmed the signing.

Update: The Blazers have confirmed the signing in a text message to the media and issued a press release (see below). Thomas is expected in Blazers training camp on Monday.

In response to an inquiry, the team has refused to answer whether the second year of the deal is a team option, citing team policy. The team has also refused to answer whether it retains access to its mini-Mid-Level-Exception, again citing team policy.
For comparison's sake, the Bulls reportedly signed Thomas to a 1-year deal worth "slightly more than the veteran's minimum" in July 2010 according to Sam Smith of Bulls.com. The only way for the Blazers to go above the veteran's minimum would be to use their mini-Mid-Level Exception -- worth up to $3 million per year for up to three years -- which they could have used all or part of to sign Thomas. Including guard Brandon Roy, who is pursuing a medical retirement but could still be waived via the amnesty clause, Portland's expected roster is now full at 15 players.
Update: Jason Quick of The Oregonian reports that Blazers Acting GM Chad Buchanan said the move "did not exhaust team's free agent money and he expects to sign another player before season." That wording still leaves open the possibility that Thomas was signed at either the veteran's minimum or using a portion (or all) of the Mini-MLE. To add another player, the Blazers would need to either waive Roy or part ways with another member of the roster. Both Earl Barron and Chris Johnson are on non-guaranteed deals for 2011-2012 according to StoryTellersContracts.com.

Thomas played for the Chicago Bulls last season, averaging 4.1 points and 5.8 rebounds in 22.7 minutes per game. He stepped in to start when center Joakim Noah went down with an injury midseason and power forward Carlos Boozer was out with a broken hand. He has played an average of 65 games over the last six seasons.

He brings a specialty in hard fouling and drew praise last year for his solid low-post defense. The Bulls were the NBA's best defense last season.

Buchanan told Blazersedge on Monday that his priority was the center position but positional versatility was also valued. Thomas, listed at 6-foot-9 and 230 pounds, can play both the four and the five if necessary.

Kurt Thomas remains one of the best screeners in the league. Really helps offensive spacing with that and ability to pick-and-pop.

Kevin Pelton provides this rundown of Thomas for the forthcoming edition of the Basketball Prospectus preview written by colleague Bradford Doolittle.

"With Shaquille O'Neal settling into retirement, Kurt Thomas and Grant Hill are now engaged in a Bobby Bowden versus Joe Paterno battle. The latter pair seemingly hung onto figurehead coaching jobs way past their expiration date, battling for the right to be called college football's all-time leader in coaching wins. In the case of Thomas and Hill, they are now the league's oldest players. Thomas will always have the edge on Hill as long as they play--he was born one day before the former Duke star. Thomas is one of the marvels of the NBA.

Not only is he nearing 40 years of age, he can still play. Thomas gave the Bulls a month of key performances after Joakim Noah was injured in December. He continues to be a top-tier defender, using strength and savvy to offset his declines in lateral movement and leaping ability. He still rebounds at a rate better than 10 per 40 minutes, and will seemingly use his 15-footer to make teams pay for helping off him until the end of time. It really seems like Thomas can play as long as he wants. His game depends little on athleticism and he provides a valuable skill set that teams will continue to employ. When Thomas decides to leave, it will be because he doesn't want to play anymore. There aren't a lot of players that can say that.

Aggrey Sam of CSNChicago.com first linked Thomas to the Blazers last week. Jason Quick of The Oregonian listed him as one of three free agent targets on Saturday, along with Reggie Evans and Josh McRoberts. Quick also reported on Sunday that the Chicago Bulls, Boston Celtics, Memphis Grizzlies and Miami Heat were also interested in Thomas.

Here's a visualization of the 2011-2012 training camp Blazers and their career games played. (Roy and Oden left out.) Click to enlarge. 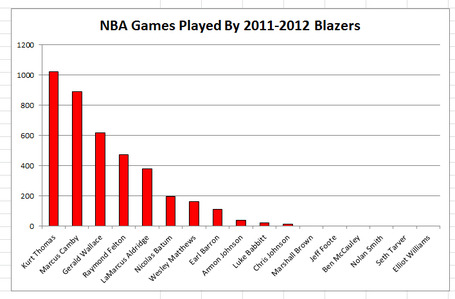 "We're excited to be adding the experience, toughness and veteran leadership that Kurt will provide for our team," said Acting General Manager Chad Buchanan. "We've long respected Kurt and expect him to make a strong contribution to our organization."

Chris Haynes of CSNNW.com has quotes from Thomas.

"I'm excited. I haven't spent any large amount of time in Portland but I know they have great fans and it's a great organization," Thomas told CSNNW.com. It's a great opportunity for me to retire a Trail Blazer."

"I feel great," Thomas said. "I make sure that I take care of my body and do what I need to stay on the court. I'm in good shape and ready to go."