The Trail Blazers And The New Luxury Tax Rules

Share All sharing options for: The Trail Blazers And The New Luxury Tax Rules

A few days ago, Howard Beck of the NY Times and Sam Amick of SI.com each reported that the details for a new luxury tax system have been agreed to by the NBA and the Players' Union.  The new system has rightly been called more 'punitive' than the previous system, as the tax rate increases the further that a team is above the tax threshold.   Under the previous Collective Bargaining Agreement, teams were taxed $1 for every dollar that their Team Salary total was above that threshold.   However, this new system reportedly creates 'tiers' of taxation.   Teams will now be taxed $1.50 for each of the first $5 million that they are over the threshold, $1.75 for each of the next $5 million, $2.50 for each of the next $5 million and $3.25 for every dollar that their Team Salary is more than $15 million over the threshold.

The previous tax system had a significant impact on the Trail Blazers and this new system could impact them even more.   I'll try to break it down after the jump....

Also included in the chart are the amounts that the teams would have paid last season under the systems proposed by the NBA and by the Players' Union last month.  The final column shows what each team would have paid under the rules that have now been agreed upon by both sides (click to enlarge).

As you can see, if these new rules had been part of the previous CBA, the amount of total tax paid would have more than doubled to $152.3 million.   The higher paying teams would have been the hardest hit, however, and the Trail Blazers would only have paid slightly more in tax ($3.5 million vs. $2.3 million).

Looking forward, this new tax system could potentially have a huge impact on the financial position of the Trail Blazers.   Consider first the news that the salary cap for 2011-12 is expected to be set at the same $58 million level that it was at last season.   Larry Coon also reported in a recent chat that "The best info I have right now is that the cap will be frozen at $58 million and the luxury tax threshold will be frozen at $70 million for two years."   If this is true, we can start to make some concrete analysis about where Portland stands going into the (hopefully) upcoming season and even into 2012-13.   With this information in hand, educated guesses about what the team could/should do in regards to personnel, making free agent signings and even making trades.

First of all, let's consider where the franchise stands today.   Here, to the best of my knowledge, are the current financial obligations held by the team (click to enlarge): 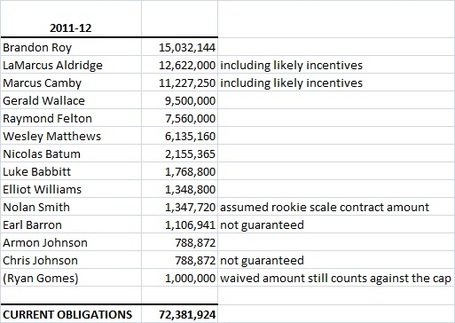 A note about Nolan Smith's number - in actuality, he is not currently under contract.   However, for purposes of simplicity, I am assuming that he will sign for the maximum amount allowable under the previous CBA, which is 120% of the rookie scale amount that was set in the previous CBA.   Of course, if the amount he actually signs for differs from this amount, the figures below will be revised by the difference.   But rather than add yet another variable below, I decided to add Smith into Portland's 'current obligations', knowing that even if this number turns out to be off, the difference won't significantly impact either the numbers below or any decisions that the franchise has to make.

It's important to note that, right now, the team's current obligations puts them above the expected tax threshold of $70.3 million.   That not only puts them on track to pay tax at the end of the season, but it also could limit their choices regarding personnel decisions in the months ahead.   If, as reported as being possible, the next CBA limits use of certain exceptions such as the MLE to teams under the tax threshold, Portland might not be in a position to use these exceptions to finalize their roster.

Other major decisions that seem to be looming for the Trail Blazers include:

I've tried to outline the financial implications of some of these choices below.   Each scenario listed includes the tax payment that the team could face under the new tax rules if they pursue that course of action.   Note that I haven't listed every possible scenario, as that list would be many, many pages long.   However, I've tried to present a number of likely scenarios, including potentially signing Oden to a contract other than the Qualifying Offer (set at $11 million just because I had to choose a number) and potentially using the full MLE (which will reportedly be set at $5 million).   You can click on the image to enlarge it for easier reading: 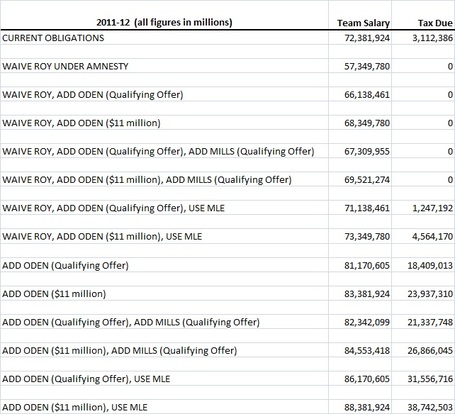 The last option speaks volumes - if the Trail Blazers choose to keep Roy on the team and re-signed Greg Oden for a contract paying him $11 million in 2010-11 and used the entire $5 million MLE, they would be looking at paying nearly $40 million in luxury tax at the end of the year.   A very hefty cost indeed.

Trying to project a similar list of scenarios for Portland in 2012-13 is even trickier, even with the knowledge that the salary cap and tax threshold are likely to remain at $58 million and $70 million, respectively.  Not only are there a new set of personnel decisions that the franchise will face, but any decisions that Portland makes this year could, of course, have implications in future seasons.   However, I enjoy a challenge.....

Again, let's begin by looking at the current financial obligations for 2012-13 (with Nolan Smith's salary set under the terms listed above):

Note that this list not only assumes that Roy doesn't become a casualty of any amnesty program in 2011-12 and that Gerald Wallace exercises his player option for 2012-13, it doesn't include any 2012 1st round draft picks that the team might have rights to.   This might add $1 million to the total, it might add $2 million or even more.  But rather than spending too much time on trying to speculate on what financial cost such picks might bring, let's move forward with the understanding that any scenarios listed below will be impacted by the possible presence of draft picks.  That being said, I believe we can begin to make some educated guesses as to what the potential financial implications would be as the franchise faces a new set of personnel decisions in 2012-13, including

Again, any list of possible scenarios that is not several pages long is bound to be incomplete.   However, I've tried to provide some of the possibilities, using some assumed contract numbers (such as $6 million for Batum and $7 million for Felton), in an attempt to see what tax implications Portland might face if they make certain decisions. For the sake of simplicity (and brevity), I've made a number of assumptions to shorten the list of possible scenarios.   Included in these assumptions?   That Marcus Camby is neither re-signed by the team after his contract expires nor traded for a non-expiring contract in 2011-12.  That players such as Patty Mills, Armon Johnson, Chris Johnson and Earl Barron are allowed to become free agents after the upcoming season.    Etc., etc.   Trying to account for every possible scenario would leave us all confused and bored, so I've decided to limit myself to the major ones I've listed below.  You can again click on the list to enlarge it: 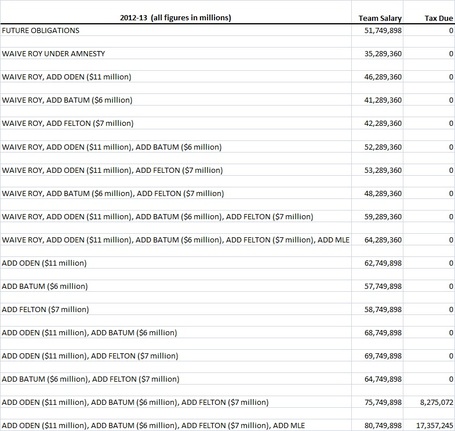 Again, looking at last scenario, if Portland decided to retain Roy + re-sign Oden, Batum and Felton + make one $5 million free agent signing using the MLE, they would be looking at a tax bill exceeding $17 million.   This with only a roster of 11 players, so further signings (even minimum contract players) would only serve to increase this amount.

Discussing Portland and the luxury tax in the same sentence is nothing new.   But having a tax system that is more punitive than in years past raises the stakes.   Over the next two years, at least, the decisions we will see the team make with regards to personnel will help us understand the financial philosophy that the organization has:

What we don't know is this - now that the stakes of being above the tax threshold will be much higher, what choices will Portland make in regards to personnel in the next two years?   That will only be known - and evaluated - as time passes.   Purely as a fan, I would hope that the team would be willing to do whatever they could to win, even if it means staying above the threshold.   But we'll see....

Feel free to share your thoughts and opinions - or even bravely make predictions about what you think the team will do.