Yesterday I unveiled the Shake Ratings for the 2010-2011 Portland Trail Blazers, to date, and provided some first-look analysis.

Click through to check out the Shake Charts, which help visualize a player's consistency and/or inconsistency in scoring.

How To Read A Shake Chart

Here's last year's explanation on how to read Shake Charts, condensed a bit for clarity. Click on any of the images below to expand them to full-size.

I've set up the Shake Charts like seismographs.  The X axis represents a player's point production in a game.  The y axis represents the games played during the season: the top is opening night and you work down through the course of the season.

A final, important note on the charts themselves: for maximum visual impact, the X axis on each chart is individually calibrated based on each player's minimum and maximum point totals.  Using the same X scale for each player made it difficult to see the scoring inconsistencies of the role players who haven't produced the same high-end individual game scoring totals. So be sure to take note of the X axis domain when you look at each chart.

Last year's chart serves as a great reminder of exactly how consistent Roy was. Especially down the stretch, Roy was hitting practically every single night he was out there. As mentioned yesterday, Roy's scoring was way down: This year's chart practically chops off a third of last year's chart when you're looking at the X-axis. His consistency was down as well (more blue back and forth). He actually started the season with a fairly close approximation of last year, but things started to go sideways about game eight. Another obvious feature: Roy's top-end (to the right of purple) scoring is non-existent. His best efforts this year would have been merely routine efforts last year. 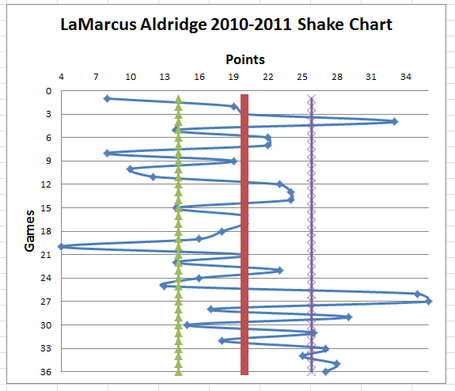 Yesterday, I noted that Aldridge is Portland's most consistent scorer this year, and you can visualize that by looking at how many of the blue dots find themselves between green and purple. He had a few stinkers, all early in the season, but his play has recovered very nicely. Looking at the bottom third of the chart, you can see Aldridge's torrid stretch over the last three weeks or so, when he's been averaging 25/10. He has dipped below the green just once in the last 13 games and has pushed his scoring average up with eight different scoring nights hovering around or to the right of the purple line.

What's more, the consistency is improved markedly in the bottom half of the graph compared to the top half, which is no surprise because it coincides roughly with the shift to featuring him as the go-to offensive option. Last year, Kevin Durant went on an absurd streak netting 25+ points per game, and Aldridge's last 10 games look quite a bit like what Durant's streak looked like.

The question: how long can Aldridge keep it up? If Aldridge were to maintain close to his current pace since the middle of December, he will more than make up for his slowish start, and will finish with a better Shake Rating than any other Blazer during the last three seasons, including Roy. 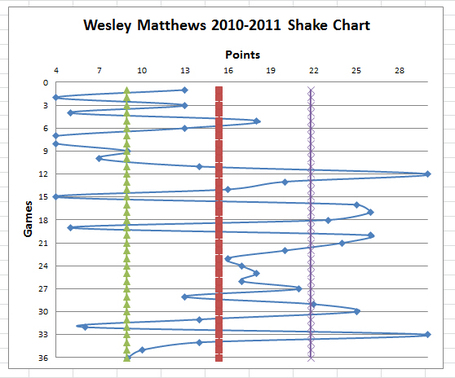 This year's Shake Charts are probably best implemented to get a true sense of Matthews' offensive contribution. Given his exceptional work ethic, he brings energy and effort every night. Unfortunately, he jumper doesn't always come along for the ride, as you can see how many nights he has performed to the left of the green line. You'll notice, though, that most were concentrated at the beginning of the season, and that he, like Aldridge, has stabilized during the second half. Given the second-half trend during his starts and Roy's absence, his Shake Rating should improve by season end. The key to his consistency will be his shooting percentage, which has been up and down.

Compare Matthews' chart to Roy's from last year, however, and you can get a sense for exactly how much ground Portland is trying to make up. 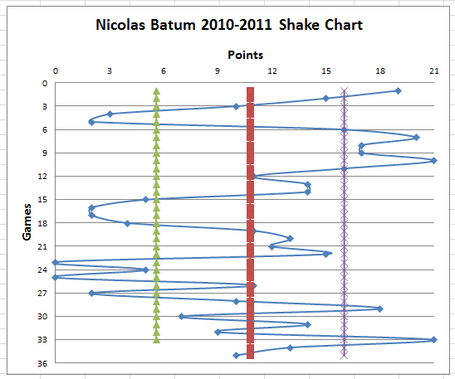 Batum's chart looks like that of many role players, as roughly half of his performances come to the left of the green or to the right of the purple, meaning he often shows up huge or does't show up at all. (It also almost looks like an inverse of Matthews' chart.) Batum had a hot start when he was starting at the small forward, but his consistency tanked when he moved to the reserve role to make way for Matthews.

He has bounced back, though, and has shown improved in the last eight games or so, although it started a bit later than that of Aldridge and Matthews. As I noted yesterday, there is obviously huge room for improvement for Batum when it comes to consistency. The last stretch is fairly promising.