Last February, I debuted Shake Charts so that we could visualize and hopefully better understand scoring consistency and inconsistency. The timing of the investigation was no accident, as the Portland Trail Blazers were coming off one of the most ridiculous runs of injuries in recent memory, and lineups and depth charts were being juggled like crazy.

For the last two years, Portland's identity was as an offensive efficiency machine, largely because of the extremely efficient, consistent and voluminous scoring of all-star Brandon Roy. The Blazers ranked No. 2 overall in 2008-2009 and No. 7 overall in 2009-2010. This season, with Roy out indefinitely, Portland's efficiency has dropped off to No. 15 in the league, and the Blazers have struggled to find a consistent offensive identity, although they have started to show some flashes of brilliance in recent weeks as players settle into their roles during the post-Roy portion of this season.

If there's been a standout aspect of this Blazers season so far, it's been that, besides Roy (and Greg Oden), the vast majority of the rotation has played in a vast, vast majority of Portland's games. LaMarcus Aldridge, Andre Miller, Nicolas Batum, Wesley Matthews, and Dante Cunningham have all missed one game or less (Miller's missed game, of course, wasn't by choice). Marcus Camby and Rudy Fernandez, too, have missed only a small handful.

What affect has the stability of the roster had upon scoring consistency? How do this year's Blazers compare to the two previous incarnations when it comes to the consistency of their offensive attack? What needs to change from a consistency standpoint to bring about a return to Portland's elite offensive efficiency? Let's take a look.

As a quick refresher, here's the definition of Shake that I posted last year.

"Shake" is a term I made up to refer to a player's scoring (in)consistency.  It is essentially a measure of a player's variance in scoring.  For those interested, here's how I calculate it.

I grabbed the top eight players (by minutes played on the season) and calculated their Shake ratings.
Here's a chart that displays the number of games, minutes per game, points per game and Shake rating for each of the last three Blazers teams. 2010-2011 numbers are current as of today. Each group of data is sorted by most consistent to least consistent (lowest Shake to highest Shake). 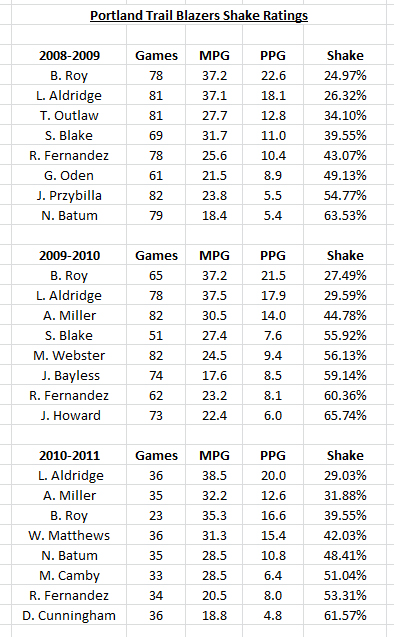 Brandon Roy: Before making the shut it down decision, Roy's scoring took a big hit, as did his scoring consistency, as his Shake rating dipped from 24.97% two years ago, to 27.49% last season, to 39.55% this season.

What are the implications of this fall? Well, a 40% Shake is not nearly good enough for a No. 1 scoring option, in almost every case, because you're talking about huge swings in scoring output from game to game. How do you build a consistently winning game plan if your main scorer is vacillating that wildly? That Roy was taking 14.6 field goal attempts per game this season and registering this inconsistency leads to the drain on overall team efficiency that we've talked about multiple times.

Nothing about this rating suggests the Blazers were wrong to shut down Roy and it reaffirms that his shooting/scoring role should be more limited upon his return.

LaMarcus Aldridge: Aldridge has not only raised his scoring average a few points per game so far this season, his Shake rating has also improved ever so slightly. Despite getting knocked for not always showing up over the last few years, in retrospect, Aldridge has solidified himself as easily the most durable, reliable and consistent Blazer over the last three seasons.

The big question these days, of course, is whether Aldridge can become a true No. 1 scoring option. Shake would suggest that he still has not yet fully reached that level in terms of consistency, but he is on the outer fringes. This chart from last year shows the Shake ratings (X axis) of many elite No. 1 scorers. Roughly 20 players posted better Shake ratings than Aldridge's current mark, including the usual suspects at his position like Tim Duncan, Dirk Nowitzki, Amar'e Stoudemire, Chris Bosh, David Lee and Carlos Boozer.

Given his increased output and consistency over the last month, there's good reason to believe his Shake rating will improve by the end of the season, but it's no guarantee. The verdict is still out.

Here we have an excellent case study of what a consistent role can do for a player's scoring output consistency. Think back to last year and remember all of the different ways Miller was and wasn't used: off the bench, in a three-guard lineup, sitting during the fourth quarter, etc. This year, he's playing heavy minutes regularly, with just a few exceptions, such as when McMillan has turned to Patty Mills late in games. Miller's Shake has correspondingly improved from 44.78% to 31.88%, a very large jump.

Clearly, however, it has not been enough to make up for Roy's absence, as Miller's scoring output isn't as large and his consistency does't match the levels posted by Roy over the last two seasons.

On the whole, then, we can conclude that a major reason that Portland's offense has taken a step back from an efficiency standpoint because its top two options this season are noticeably less consistent and voluminous than the team's top two options each of the last two seasons. That is fairly self-evident, but whatever.

I hate to pick on Matthews because he has been the single best story of this season for the Blazers, but his last three shooting nights (3-12, 3-11, 4-12) aren't simply a cold stretch. Matthews finds his season Shake rating at 42%, which by comparison, is better than Miller's last season but not as good as both Steve Blake's and Travis Outlaw's two years ago. His rating is due, in part, to his changing role (bench player, starter, playing multiple positions), but also in large part due to the streakiness of his shooting. He can get really, really hot, but he can also get pretty cold.

Going forward, Portland will need three (four would be ideal) consistent scorers to return to its excellent offensive efficiency days. Presumably Matthews will be one of those core players this year and in the future; Right now, you can take either a half-full or half-empty approach to that thought. The half-full side says that he's just now getting into a major starting and scoring role and is still developing chemistry with his teammates. The half-empty side might look at the fact that teams will scout against him and force him to his weaknesses more effectively as this season and next season progress, making his track to improved consistency more difficult. The jury is still out.

Another player that Portland would like to pencil in as one of those consistent scorers is Batum, and he's already shown the ability to hit three-pointers and manage his shot selection well enough to make himself a very efficient auxiliary option. While he didn't play enough minutes last season (due to injury) to crack Portland's top eight, it's no surprise that his scoring consistency is much improved from his rookie year (from 63% to 48%), when his offensive game and responsibilities were quite limited.

Still, there is much work to be done. Ideally, the next step for Batum would be to solidify into the No. 3 role that Outlaw filled so efficiently in 2009, but doing so will require a greater scoring output as well as a big step forward in consistency from his current mark (he's at 48%, Outlaw was at 34%). As I hinted at earlier this week, Batum's potential emergence in Roy's absence is one of the biggest developments to keep an eye on over the next 2-3 months. It's conceivable that his Shake rating improves significantly by the end of the season given that his role and minutes figure to be stabilized from here on out after he dealt with the same inconsistency in minutes, role and position as Matthews did. But Batum will need to continue to perform with a high-activity, assertive game to make it happen.

OK, with the major players dissected, let's take a look at this year's squad compared to the last two seasons. Click on the image for the full size. 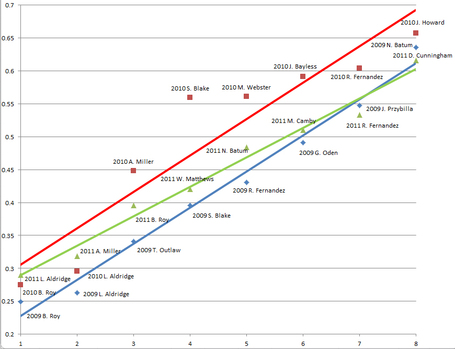 If there's a standout aspect about the 2010-2011 Blazers, it's that, despite being less efficient than their earlier counterparts, their top eight is more consistent than last season's top eight. In 2009-2010, Portland only had three guys under 55% Shake. This season, seven different Blazers are under that mark.

This speaks to the relative health and regular minutes the guys are playing compared to last year's tornado of injuries, lineup changes, and major mid-season trade (Outlaw and Blake for Camby). But you can also get a sense for the balanced approach we've seen this year compared to last year, as the drop off from Roy and Aldridge to the rest of the players in terms of consistency was very pronounced in 2010, while the drop off 1 through 8 so far this season is not as steep. In the consistency marks of scorers 3-6 this year compared to last year, you're also starting to see evidence of the team-based attack rather than Roy/Aldridge ball dominance last season.

If you're looking for an offensive efficiency and consistency prescription going forward, there are really three points of emphasis, none of which should be all that surprising.

1. Aldridge needs to improve his game-to-game consistency to an elite level. It's very good overall, it's even gotten slightly better this season, and his scoring output is noticeably greater, but even more is required for this team to make real noise with him as the lead option.

2. Wesley Matthews needs to take a fairly significant leap forward in his scoring consistency, as his off-nights will continue to add up over the course of an 82-game season and, given his current large role, will drag down the team's offensive efficiency number and compromise Portland's ability to win games.

3. Nicolas Batum needs to continue to progress as he has this season, but also embrace the opportunity to do even more offensively now that Roy is out indefinitely. Of Portland's auxiliary players, he's the most likely to be able to take that step forward and transform into a truly consistent scoring option. If Rudy Fernandez returned to his rookie year form, he's also a possibility to fill that role, however 2011 Batum has so far been a closer approximation to 2009 Fernandez than 2011 Fernandez has been, and he's set to continue to play heavier minutes from here on out.

Tomorrow, I'll post some individual player Shake Charts so we can visualize the changes described.