In a sparkling two-way performance that was enough to render a nit-picker speechless, the Portland Trail Blazers downed the Houston Rockets, 100-85, at the Rose Garden on Sunday night.

Summarizing this game is akin to how The Ohio State University decorates the football helmets of its best players or how a third-grade teacher hands out a report card to the hall monitor. Sticker after sticker after sticker recognizing outstanding achievement. Gold stars for everyone.

Portland's team defense was excellent, and was aided by cold-shooting nights from two of Houston's major weapons, as Kevin Martin and Aaron Brooks combined to make just 1 of 10 three-point attempts. Luis Scola, who has given Portland trouble in the past, was neutralized fairly well, and the Rockets, who played deep into their bench in both halves, never found a hot hand to open things up. The Blazers limited the Rockets to 11 offensive rebounds and just 11 second chance points, and also matched the league's fourth fastest pace team point for point (14 each) in transition.

Offensively, for the second game in a row, the Blazers passed the ball exceptionally well, making the correct reads, at the correct times, and in the correct spot time after time. 29 assists on 38 field goals is an absurd ratio, and it reflects the quality of the looks as well as the proximity to the basket. With Yao Ming injured, Houston isn't exactly known for defending the rim, and the Blazers picked at that weakness mercilessly, running lobs off curls and changing the point of attack swiftly when feeding LaMarcus Aldridge. They also finished many layups and dunks in transition.

"Chemistry has gotten better," Aldridge explained afterwards. "Guys are figuring out their roles, guys are making shots, guys are looking for shots, we're being more consistent offensively and defensively." So consistent, in fact, that Aldridge, who put up 25 points and 11 rebounds, was able to rest for most of the fourth quarter with the game decided.

Houston heads were often spinning, and a hot-shooting night from Patty Mills made sure there was no respite when the Blazers hit their second unit. Mills nailed a three pointer practically as soon as he stepped on the court, and hit for a new career-high 14 points in 22 minutes, shooting 6-12. "I was asking [Mills] if Brooks did something to him," Aldridge joked. "Because I had never seen him look that hungry offensively before, trying to get to the basket, looking for his shot."
Not to be lost in the shuffle was an extremely efficient night (21 points on 12 shots) for Nicolas Batum, a player who appears to be embracing the increased minutes, touches, and offensive motion in Brandon Roy's absence. Batum was a major player offensively throughout -- starting early with a nice pull-up jumper near the foul line off of a well-designed curl  -- but he was also a key component in a run near the end of the third quarter that put the game away for good. Batum leaked out and finished a gliding lay-up at full speed, Aldridge finished a chippie after Martin missed a three, and then Batum finished off another runner in transition following a Scola turnover to cap a 12-0 Portland run at 75-58. The Rockets finally called timeout to stop the bleeding, but the patient was dead.
"We played defense first," Batum told me after the game. "When you play defense, you get easy baskets, fast break, transition, that's what we tried to do tonight. We know that Houston has a good offensive set, and I think Coach did a good job to set the game plan. We tried to stop them first on defense, that's what we did tonight. Before they scored in the last five minutes, we held them under 70 points, we did a great job tonight."
Blazers coach Nate McMillan stressed the same theme. "They average 104 or 105 points and we held this team to 85. They can score, they have a lot of shooters, one of the top three-point shooting teams in the league, they have an inside presence with Scola. Hill had been playing well for them. We had to defend both. It starts defensively for us ... I thought we started to play this style of basketball in the Utah game, at Utah."
To McMillan's point, the Blazers have allowed an average of 94.6 points per game so far this season. In the last four games, three wins plus a loss to Denver, Portland has allowed just 90 points per game. Opponent field goal percentage during the four game stretch is also down to 44.4% percent from 45.9% on the season. Better numbers as the starting lineup continues to gel, numbers that will be difficult to keep up as Portland heads out on a three-game road trip this week, before welcoming evil to the Rose Garden next Sunday night.
Random Game Notes 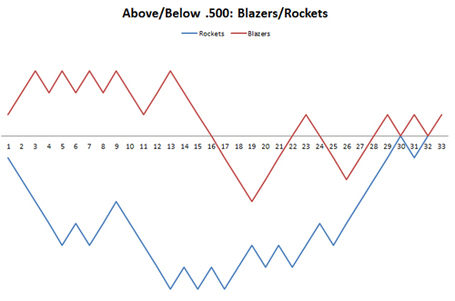 I thought we did a good job executing the game plan. Defensively, nice job of being physical with Houston and disrupting their cuts. Offensively, great ball movement tonight, getting the ball from side to side. 29 assists. That is what you want to see as far as execution.

34 points, and we need both units to play well, we've been saying that all season long. I thought tonight Patty came in and was aggressive, knocked down some shots. Rudy finally got it going. Dante gave us some scoring. When those are scoring, it certainly helps. But I thought the defense was good with that group. Patty picking up Brooks and not allowing them to get into transition.

This has been the group we've played with for awhile now. I think everybody is somewhat adjusting to their roles and rotation, and plays that we can call. We're going to have to. This is a team, as far as Joel, we'll have him coming back, that will be an adjustment getting him back in the lineup, and getting him some minutes, offensively we've added a few things. I thought they did a nice job tonight executing, setting screens, making hard cuts.

I thought he was good. The first half he was knocking down shots and then defensively I thought he did a really good job of making Brooks stop. Not allowing him to get going. He has been a guy that we've had trouble with, keeping him in front of us. Stopping him.

That's where it starts. Defensively, they average 104 or 105 points and we held this team to 85. They can score, they have a lot of shooters, one of the top three-point shooting teams in the league, they have an inside presence with Scola. Hill had been playing well for them. We had to defend both. It starts defensively for us.

It doesn't really matter who you play, we've been saying this all season long. I thought we started to play this style of basketball in the Utah game, at Utah. Being physical, as far as cutting, bodying guys, we just need to be consistent, tweak your adjustments, as far as how you play the pick and roll. But some things should not change.

One thing that stands out?

It's not one thing. Both ends of the floor. You've got to defend, you've got to score. Tonight we defended  a team that can put up points. We scored. We were pretty consistent, around 22 or 23 points each quarter. And 29 assists, so it's not one thing, I thought both the first and the second unit did a good job. Both ends of the floor we were pretty sharp.

Rebounding is a big key to the defensive end of the floor. He's also had to draw the assignment of guarding the best low-post player. He's been doing it all season long. Even in the game he got hurt, he played half the game and had 13 boards. That is huge. We've always been a team that needed to rebound better. We know that he's going to go to the boards and control the boards for us. You can get out into your transition, he's a big part, a very important part to our defense as well as our offense. He's doing a good job of connecting with LaMarcus. They've had that working pretty much all season long.

Until you win on the road, does this mean much?

Of course. This win means a lot. We know we've got to do better on the road. We'll get that opportunity against Dallas.

Aldridge was able to be pulled in the fourth

Yeah. Both he and Dre. And Camby, you can let him play a few more minutes down the stretch. Any time we can rest our guys it certainly helps.