A few weeks ago, right before Rich Cho started to lower expectations, we took a look at how John Hollinger's computer wants to get frisky with Greg Oden in the back of a drive-in movie theater.

Hollinger's statistical projections expected big things from Portland's oft-injured center this season and I joked that Basketball Prospectus's Kevin Pelton - who has spent the entire summer writing his second book and taking breaks from writing to hype the Blazers on google chat - had his work cut out for him if he wanted to be Greg Oden's No. 1 Hype Man heading into training camp.

Never one to shy away from a challenge, Pelton pulled the levers on his laptop and cranked out his SCHOENE per 40 minute statistical projections for Portland's starting five.

As you can see, he didn't disappoint.

Pelton's numbers for Oden are pretty close to Hollinger's. Indeed, across the board there aren't many differences between the two systems. With that, I sensed an opening.

Stroking the fur of one of the 37 cats he now lives with, Pelton responded, feigning disinterest. "I've shown you my three-year WARP projections based on similar players that show Oden having the most future value of any Blazer, right? "

"HERE YOU GO," he typed in capital letters so that he could be heard over the sound of an electric can opener going to town on some Purina. 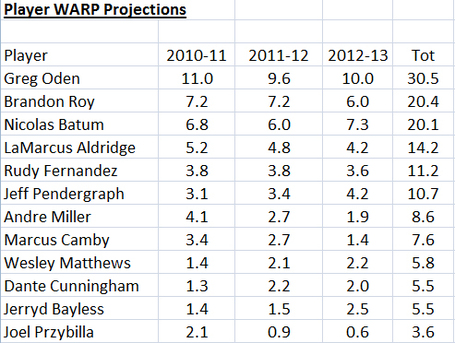 WARP, you'll remember, stands for Wins Above Replacement Player. WARP is one of the most accurate and proven aggregate statistics that aims to measure an individual player's overall worth. Basketball Prospectus defines the term...

Wins Above Replacement Player. Based on performance and playing time, the wins a player has created as compared to a replacement-level player seeing the same minutes.

The chart above, therefore, ranks members of the current Blazers in order of their projected distance above an average replacement player over the next three seasons.  The column on the far right sums these distances to magnify the overall impact.  In the rough draft version of this chart there was actually another column even further to the right that just read "Od-en! Od-en! Od-en!" over and over and over but I had to cut that out because of space constraints.

Pelton wasn't done however. His feline now properly fed, KP2 had a moment to send over a final flourish. "Because my three-year WARP projections are looking so far into the future, they aren't quite as reliable. Still, check out SCHOENE's current comps for Oden. I think you'll be impressed."

A "comp" is dork shorthand for comparable and refers to other players from recent NBA history that produced similar statistical profiles.  Way back in 2009, I explained how KP2 derives his comps using similarity scores that take into account a range of factors like age, experience, height, weight, minutes played, usage rate and a whole bunch of other statistics.

His similarity scores and the resulting comps are always fascinating.  This year, for example, Nicolas Batum's comps include Rashard Lewis and Mike Miller. Brandon Roy's include Michael Finley and Kobe Bryant. Jerryd Bayless's include Sebastian Telfair while LaMarcus Aldridge's include Antawn Jamison.

As for Oden's? His comps remain, despite three injury-plagued NBA seasons and scant production as a pro, in a class of their own. I've decided to place them in a grey box for emphasis.

With that, Pelton adjusted the championship belt he purchased from Rasheed Wallace on eBay and went quietly into the night, confident that his computer had secured the title as Most Devout Greg Oden Supporter On The Planet.

As he crested the horizon, heading to the Seattle Storm Western Conference Championship victory parade with his 37 cats in tow, Pelton looked back over his shoulder and muttered...