Day three of Portland Trail Blazers training camp featured the media's first look at live five-on-five full-court action. Although the lineups were mixed and matched and Marcus Camby (sitting due to a minor groin injury), Greg Oden and Joel Przybilla all were not participating, there was still a first day excitement about the event.  Brandon Roy was jawing at an official (Buck Williams), Nicolas Batum was closing out hard with his massive wingspan on defense, all 3,234 combo guards took their turn pushing the tempo and handling the rock and Portland's young bigs hit the glass hard on both ends of the floor.

Like last year, the Blazers' deep roster packs a "wow" factor to it this year. The athleticism, the length and the work ethic are all there in spades once again. But the biggest positive difference between this year's squad and last year's squad, at first look, is easy to pinpoint: perimeter versatility.

When people get down on Portland's predictable and relatively boring offensive system last year, one thing that gets overlooked is that the routine nature on offense was driven in part by personnel that was not capable of playing multiple positions.  Rudy Fernandez is a two. Martell Webster is a three. Nicolas Batum, working his way back from shoulder surgery, was mostly a three. Brandon Roy, hampered by injuries himself, was a ball-handling two. Andre Miller is obviously a one. Steve Blake plays well off the ball but his lack of explosiveness, size or athleticism limits him on offense. Jerryd Bayless was arguably the only player that could contribute at two perimeter positions last season, and his detractors would argue that he actually contributed at zero positions.  That lack of positional versatility was a key limiting factor in reinforcing a rigid offensive system for Nate McMillan.

There are a number of key differences emerging already this season that should open things up as wide as McMillan's imagination can handle.

First and foremost there is the addition of Wesley Matthews. Matthews is a two who has played three and... wait for it... might be asked to play some one as well. If there's been a surprise during conversations this week with Blazers scouts and coaching staff members, it's hearing their respect for Matthews ability to handle the ball and initiate the offense in certain situations.  One scout pointed back to tape from last season, noting that Utah began using Matthews to bring the ball up the floor so that Deron Williams could work off of picks for easier looks and exploit mismatches. The scout described a number of different ways Portland could try to either free Roy with screens for less contested looks in the midrange or use a series of picks to get cross match-ups that Roy could exploit one-on-one in isolation. By going larger and playing Matthews and Roy together in the backcourt, Portland would likely force the opponent to guard Roy with their point guard, allowing him to shoot over the top from anywhere on the court, including the post. Matthews, it is believed, will be able to defend a good portion of the league's point guards, minus those with elite quickness, to help make that combination work.

Although he said it was too early to pinpoint roster combinations that are working well together, McMillan agreed with the premise that Matthews is drawing consideration at all three perimeter spots. "He's doing a good job in the practices in handling the ball and making decisions," McMillan told me today. "We'll see where that goes during the game. He could be a guy that could play one, two or three. I think his basketball IQ allows him to do that."

Roy said today he views Matthews as a small forward for the Blazers because he can defend up against bigger perimeter players. "I think he's going to play a lot of three. We don't look at it like it's a problem that he's undersized because he played against LeBron [James] and Kobe [Bryant] and Carmelo Anthony, a lot of those big guys last year. He's just a guy we can plug him in wherever we feel we need him that night, I feel Wesley can do those things for us."
Roy also said he has been impressed with Matthews's overall offensive game. "Wesley, he goes a little bit harder on offense now," Roy said. "He's a little bit better offensive player than I thought. That just shows he will bring a number of things to our team. He's fearless, he will play against anybody and we need that going up against some of these loaded teams."
This leads to another scenario that could see Andre Miller, Brandon Roy and Wesley Matthews sharing court time with Miller directing traffic and Matthews in the corner spacing the court. Speaking of spacing the court, Matthews and rookie Luke Babbitt engaged in a shooting contest to close practice that was dropping jaws. Babbitt is the type of player who can hit twenty open threes in a row.  Matthews was doing his best to hang with him and his shot form and consistency are better than I anticipated.

So, whether Matthews plays the one, two or three, it's clear he is expanding the potential options that McMillan has to play with. The same thing goes for Nicolas Batum thanks, in part, to his time with the French National Team. "[France] played him at some two this year," McMillan told me today. "He played a lot of minutes, they ran some offense through him. I think that helps him. To play in that good competition, the World Championship, you're playing at a high level every night. For all the countries that went to Turkey, you're on the road, it's a hostile place to play. The competition is different than we're accustomed to because you lose, you're out. It's a different type of pressure that the players face."

While there aren't offensive minutes open for Batum at the two, his improved ballhandling and confidence off the dribble should open things up, especially now that he is fully recovered and comfortable after injuring his shoulder last season. On defense today we saw Batum guarding multiple positions and extending dribble pressure well outside the three-point line. His lateral quickness looks fantastic and, in general, his conditioning seems well ahead of the curve thanks to a summer of playing basketball. He has reached rottweiler status on defense: sic him on whoever is giving you trouble and watch the dogfight.

In addition to Matthews and Batum, Roy says he has focused almost all of his summer work on improving the off-ball movement aspects of his offensive game and, as I mentioned earlier this week, he is putting in some extra time working out of the post as well.

Put those three guys together and throw in Jerryd Bayless and you start to really understand how improved the team's backcourt versatility should be.  A nice by-product of these additions and improvements is that you can now let guys who have a position -- Andre Miller and Rudy Fernandez, especially -- focus on that position and nothing else. That definition and the familiarity that goes with it should improve continuity between Miller and Roy, for example, and help keep things simple for Fernandez, assuming he can pull it together.

McMillan seemed happy today given the buffet of choices in front of him but he is urging patience as he sorts through the potential combinations. "Right now we're just putting guys out there and giving them our offense and defense, what we want to do on both sides of the ball," he told me today. "[In today's scrimmage] we mixed up the combinations a little bit more, as we go we'll get a better feel for combinations. You really don't get that feel until the regular season."

McMillan also said the jury was still out as to who will close games. "I think players decide that," he said. "There will be situations where they will be out there and have that chance. If you show that you're a finisher then we'll look to put out the best guys that give us the best chance to win. I can't say who that will be. The players and the decisions that they make, and what they are capable of doing, will decide that."
If I had to settle on a single thing to get excited about as the season approaches, I would say it is this improved perimeter versatility and the potential for creativity in both offensive and defensive sets that it creates. McMillan now has more than enough pieces to work with.

After suffering a back injury yesterday, Rudy Fernandez was back competing in live five-on-five action today and he seemed quite happy doing it, playing with great energy, high-fiving teammates and even massaging Jeff Pendergraph's head at one point.  "I thought Rudy played well today," Roy said. "He fell and busted his back up pretty good yesterday. He bounced back today. He was competitive. Having Rudy is great because he can knock down that three ball. He did that today a few times. He was on the opposite team and I was like, 'We can't leave him open.'"

In perhaps the most professional move of his career, Fernandez waited for McMillan to emerge from his office and, soon after, for the media mob to surround the coach. Fernandez then cut a hasty path to the team's workout room, thereby avoiding any questions with the reporters otherwise preoccupied. The plan was so well timed it drew appreciative smiles and laughs from team observers.

Here are a few shots of Fernandez playing today. 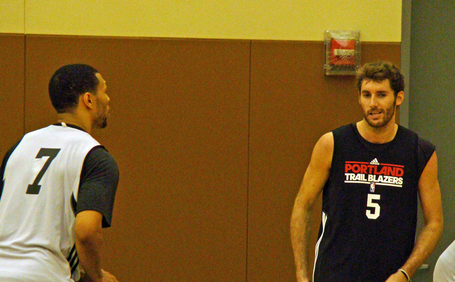 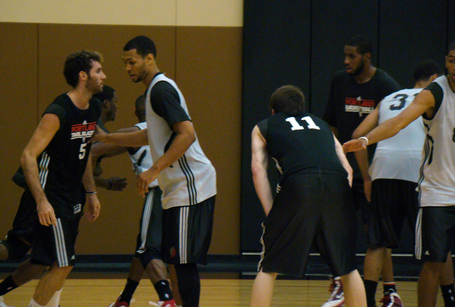